New Ways Bankers Are Spying on You

Big Banker is watching youmore closely than ever.
With lenders still skittish about making new loans, credit bureaus and others are hawking services that help banks probe deeply into your financial closet. The new offerings include ways to look at your rent and utility payments, figure out your income, gauge your home's value and even rate your banking habits based on details like whether your direct deposits have stopped.
All of this could influence your financial freedomnot to mention the number of junk-mail solicitations you receive.
Ken Lin, CEO of Credit Karma, a credit-score information website, knew he had a good credit score. But when he recently applied for a new credit card, he was rejected: The lender had flagged him as a higher credit risk because the value of his California home had declined and his mortgage principal wasn't declininggiving away that he has an interest-only mortgage.
"It's a lot more than just your credit score today," he says. 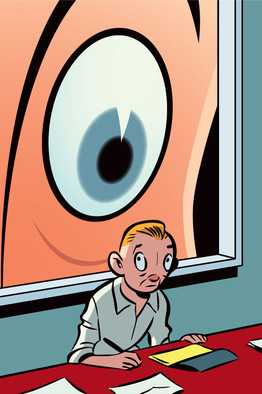 
Your credit record still matters, of course. But here are some newer ways lenders and financial-services companies are sizing up your financial behavior and credit-worthiness:
 Bank-depositor behavior scores. Fair Isaac, the creator of the widely used FICO credit score, is marketing bank-depositor behavior scores, which are used by banks to assess their own customers.
The scores are based on balances, deposit records and withdrawal activity, says Debb Gordon, a senior principal consultant at Fair Isaac.
Unlike credit scoreswhich are most affected after payments are late or credit is maxed outbehavior scores can be a leading indicator of credit risk. They also can help banks identify which of their customers might be ripe for additional services and rewards programs and which might need special attention because, for instance, their direct deposits had stopped.
 Income estimation. This business took off earlier this year after the Federal Reserve allowed lenders to use credit bureaus' income estimates to satisfy new requirements that credit-card applicants show the ability to pay their debts.
The bureaus use credit-record information, such as the size of your credit lines and the age and size of your mortgage, and plug it into models to predict your earnings. Those estimates also may be used to double-check the income you report on credit applications or to determine if you should be preapproved for credit.
You can't see those estimates. But if you are denied credit because of them, you must be given a chance to provide additional information.
 Rent payments. An estimated 40 million consumers, including young people and people who prefer to pay in cash, have too little credit experience to generate a useful credit score. But they are likely to pay rent or utility bills, which could help credit bureaus better assess their credit-worthiness.
Experian, one of the three major credit bureaus, bought RentBureauwhich collects rental-payment data from large property managersand expects to integrate that information into credit records before the end of the year.
Even if those consumers don't want credit, that information could help them win better rates from insurers, which may use insurance scores based on credit records, and fatten up thin credit files, which some employers check before making hiring decisions.
Credit bureaus say they also would like to offer data on cellphone payments, but have run into concerns over privacy issues, which may require legislation to untangle.
 Collection triggers. If you owe money, you can run, but you can't hide. Credit bureaus can now send daily reports to collection companies when a debtor's financial status changessay, if new employment information appears or if a debt starts to decline. A drop in credit use would indicate that the consumer has more capacity to pay and a better chance of repaying other outstanding debts.
 Home values. As home values have plummeted and foreclosures have soared in many states, lenders of all stripes have become more cautious, as Mr. Lin found. Using home values as a factor in credit decisions doesn't appear to be widespread, but it may come into play when someone in, say, Nevada or California applies for a new loan. Of course, it also could work in your favor if you are one of the roughly 25 million Americans who owns a home outright.
 Your wealth. Information about your assets other than homes and cars, which aren't part of the credit record, may soon play a bigger role in your financial life. With a better sense of a consumer's balance sheet, lenders might be able to target potential customers better and also have a fuller sense of their likely risk. Equifax, another of the big three credit bureaus, offers financial-service providers an estimate of liquid wealth as part of a financial "suite" of information.
As all of this becomes a widespread practice, those who are prompt and careful in all aspects of their financial life may have more optionsand those who have been sloppy with, say, their bank accounts may be penalized for that.
Write to Karen Blumenthal at karen.blumenthal@wsj.com

Source: Personal Finance Tips: How Bankers Spy on You - WSJ.com
You must log in or register to reply here.