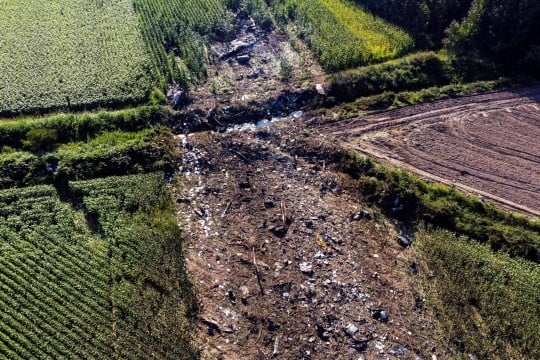 Drone footage captures how the cargo plane crash landed in the fields (Picture: Reuters)​
A cargo plane carrying 11.5 tonnes of weapons has crashed in northern Greece, killing everyone on board.
Explosions were heard for two hours after the crash as locals saw a fireball light up the sky near the city of Kavala.

The Antonov An-12 cargo plane took off from Nis in Serbia on Saturday and was heading to Amman in Jordan when it crashed shortly before 11pm local time.

Minutes earlier, the pilot of the Soviet-era plane, which was operated by Ukrainian cargo carrier Meridian, had told air traffic controllers there was a problem with one of the engines and he had to make an emergency landing.

He was directed to the nearby Kavala International Airport but never made it.

Drone footage showed small fragments were all that remained of the plane, which crashed in fields between two villages and dragged a small distance on the ground.

Greek media reported there were eight people on the plane and it was carrying 12 tonnes of ‘dangerous materials’, mostly explosives.

Small fires and a plume of white smoke were still rising from the front end of the plane on Sunday morning.

Firefighters who rushed to the scene were prevented from reaching the crash site by smoke and an intense smell which they feared might be toxic.

Villagers were told to keep their windows shut all night, to not leave their homes and to wear masks.

Teams of explosives experts are poised to search the crash site and determine exactly what kind of dangerous cargo it was carrying.

‘We were hearing explosions until a few minutes ago,’ Filippos Anastassiadis, mayor of the municipality of Paggaio, told the Associated Press a little over an hour after the crash.

Saaana it was jammed by Russian

#Lavrov : "We have information that US built two biological warfare labs in #Kiev & #Odessa and they have developed pathogens in those labs in #Ukraine."

Dmitry Medvedev adds, regarding possible Ukrainian attacks on Crimea: "If something like this happens, Judgment Day will happen to all of them"
S

STRUGGLE MAN said:
#Lavrov : "We have information that US built two biological warfare labs in #Kiev & #Odessa.
and they have developed pathogens in those labs in #Ukraine."
Russia will have to capture these cities and dismantle those labs to save the people of the world from another pandemic
Click to expand...