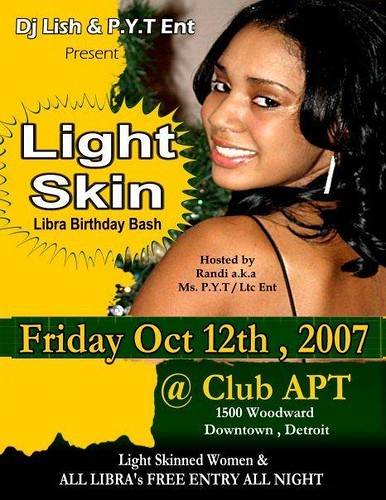 'I made a mistake,' local party promoter says after Internet backlash.

DETROIT -- A local DJ and party promoter retreated Thursday from a plan to sponsor a bash that would let "light-skinned" black women into a downtown club for free.

But the "Light Skin Libra Birthday Bash" at Club APT on Woodward Avenue turned out to be a bashing -- of promoter Ulysses "DJ Lish" Barnes after word of the unusual party spread on the Internet.

"I made a mistake," Barnes said. "I didn't think there would be a backlash."

Barnes, who said he's been a party promoter for six years, canceled the event.

He said he has gotten angry calls and e-mails from around the country about the party.

"I didn't mean to offend anyone," he said. "I had planned a party for other shades (of black women). We were going to take a shade of color each week. Next week was going to be a party for 'Sexy Chocolate' and the week after that 'Sexy Caramel.'&#8194;"

Barnes is African-American and describes himself as "dark skinned." The issue of skin color is an often painful and emotional among African-Americans. The history of slavery and the resulting legacy of intra-racial segregation have sometimes pitted darker-skinned and lighter-skinned blacks against one another.

A noted Los Angeles-based activist who goes by the name of Pearl Jr. was among the chorus of voices complaining about the party.

"I had a good conversion with him and he understood," said Pearl Jr., founder of the Black Women's Movement in Los Angeles and the author of the book "Black Women Need Love, Too."

"Ignorance can't always be an excuse," she said. "Colorism is real in the black community. It's especially very degrading to dark-skinned black women."

The party's discriminating tone harkens to the day of the "brown paper bag test," which compared the complexions of blacks to a brown grocery bag before they could be admitted to social clubs and affairs, said Pearl Jr.

The activist said she had a heart-to-heart talk with Barnes and he immediately told her he would cancel the party.

"He was basically falling in line with what we have been taught (by society) that the less African-looking you are the better you are," said Pearl Jr. "Basing whether someone is admitted on their skin color is discriminatory, which is really against the law."

Comments on Web sites and blogs about the party included urging a boycott of the party and filing a lawsuit against the party's promoter.

"The way this should be handled is that our light-skinned sisters should refuse to go unless the darker-skinned sisters received the same treatment," wrote one blogger. "We must stand together and not allow ANYONE, especially, a club to divide us."

Barnes said he is hoping to host an event to raise money for a charity to make up for whatever problems or pain he caused over the party flier.http://www.detnews.com/apps/pbcs.dll/article?AID=/20071012/METRO/710120405
Click to expand...

Uzi umekatika.
You must log in or register to reply here.