HARARE, Zimbabwe - Saying the world can "shout as loud as they like," President Robert Mugabe refused to give into pressure from Africa and the West and vowed to go ahead with this week's runoff election, even though his opponent quit the race.

The African National Congress also warned against international intervention following a report in the Times of London that Britain has drawn up contingency plans for deploying troops in Zimbabwe to resolve a humanitarian crisis and to evacuate British nationals and their dependents.
"A lasting solution has to be led by the Zimbabweans and any attempts by outside players to impose regime change will merely deepen the crisis," the ANC said.

It singled out Britain, the colonial power when Zimbabwe was still Rhodesia, saying it had not followed through on pledges to help fund efforts to put more land in the hands of black Zimbabweans. Britain has cited concerns about corruption.

Campaigning Tuesday, Mugabe was defiant a day after the U.N. Security Council voted unanimously to issue a strongly worded statement condemning violence against the opposition and saying it made a fair poll impossible. The statement won support from South Africa, China and Russia, which have previously blocked such moves.

Mugabe, a vigorous 84, kicked a soccer ball before thousands of cheering supporters and declared he would not back down.

"We will proceed with our election, the verdict is our verdict. Other people can say what they want, but the elections are ours. We are a sovereign state, and that is it," Mugabe said.

"Those who will want to recognize us on the basis of objectivity will do so. Those who don't, keep your judgment to yourselves. Our people are going to vote, and that vote will decide whether we have won or lost."

"They can shout as loud as they like from Washington or from London, or from any other quarter. Our people, only our people, will decide, and no one else," the Zimbabwean leader said.

Mugabe's plan to go ahead with Friday's vote appeared to stem less from a desire to validate his rule than to humiliate Tsvangirai.

Tsvangirai "is frightened of the people," Mugabe told the crowd. "He ran and sought refuge in the Dutch Embassy .... Seeking refuge from what? Nobody wants to harm him."

In pulling out of the race Sunday, Tsvangirai said an onslaught of state-sponsored violence against his Democratic Movement for Change made competing in the runoff impossible.

The party said Tuesday that the chairwoman of one of its provincial branches was the latest victim when she was attacked and seriously injured by Mugabe loyalists in a northern region that has seen some of the worst violence.

The party also said the rural home of its national organizing secretary was attacked Tuesday by Mugabe loyalists in military uniform. The party said the official's 80-year-old father was beaten and two other relatives were shot in the legs.

George Sibotshiwe, a spokesman for Tsvangirai, said the politician had received a tip that soldiers were on the way to his home Sunday, when he announced he was pulling out of the runoff.

Sibotshiwe would not reveal the source of the tip, and said the soldiers' intentions were unclear.
But "the moment you have soldiers coming your way, you just run for your life," Sibotshiwe said. "The only way he can protect himself is to go to an embassy."

Sibotshiwe was speaking in Angola after fleeing Zimbabwe earlier in the week. He said he saw armed men approaching a safe house where he had been staying in Zimbabwe and feared arrest.

Other opposition officials were also in hiding, among them Tsvangirai's campaign manager, Sibotshiwe said, adding that officials were no longer working out of the party's headquarters in Harare for fear of arrest.

Tsvangirai told the Dutch national broadcaster NOS radio Tuesday that the Dutch ambassador had spoken to the Zimbabwean government and received assurances there was no threat. Tsvangirai said he might leave the embassy Tuesday or Wednesday.

But the U.S. ambassador to Zimbabwe, James McGee, said Tsvangirai should be wary of government assurances and that violence was escalating against the opposition as election day approaches.

"There's really nothing that we can do in the international community to stop these elections," McGee told reporters, adding that the embassy expected Mugabe militants to force voters to go to the polls Friday, and to attack anyone who does not.

Ila jamani for the sake of Millions of Zimbabwean I wish this oldman could go in comma for a while! Jamani wenzetu kule wanateseka si mchezo!
K

Rwabugiri said:
Ila jamani for the sake of Millions of Zimbabwean I wish this oldman could go in comma for a while! Jamani wenzetu kule wanateseka si mchezo!
Click to expand...

..Mugabe na Tsivangarai are just too polarizing to lead Zimbabwe.
Click to expand...

And how did you know this?

This is what people said at the helm of crisis in Kenya. It seems that every opposition leader in Africa who will happen to pose a serious opposition to these ruling cliques there will be a cry of polarisation.

It was somewhat justfied for Kenya where both parties where somehow involved in the violence and the killing that ensued. Lakini kwa Zimbabwe ni kuwaonea kabisa akina MDC maana so far mauaji yote yamefanywa na majeshi ya kihuni ya Mugabe. Sasa how does this make Morgan polarising?

Ukitaka kuepuka fujo huko Zimbabwe ni ukubali kwamba kiongozi ni Mugabe in regardless of what people want. Now are you for this ndugu yangu Joka?
M 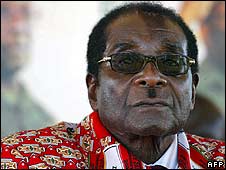 Muda unahesabika jongwe
You must log in or register to reply here.