MotoGP, WRC, SuperBike and other Motorsports 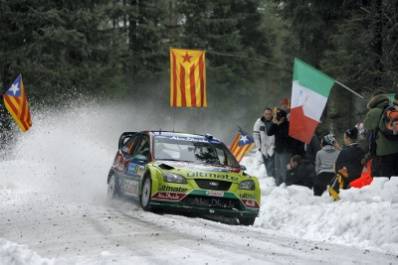 Finland's Jari-Matti Latvala became the youngest winner of a world championship event when he claimed victory in the Rally of Sweden.
The Ford driver, 22, enjoyed a stunning drive to finish 58 seconds ahead of team-mate Mikko Hirvonen. 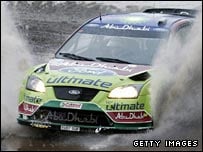 MotoGP this weekend
Cheki your local tv for live coverage

Loeb's Citroen was 50.8 seconds behind Hirvonen's Ford Focus when he was handed the lead during the fifth stage as the Finn suffered suspension damage after sliding off the road and hitting a rock.

Honda rider Dani Pedrosa powered to victory in front of his home crowd at the Spanish MotoGP in Jerez.

Pedrosa, last year's championship runner-up, took the lead early from the front of the grid and finished ahead of Valentino Rossi.
Britain's James Toseland was pushed back into sixth on the final bend.

CORDOBA, Argentina (AFP) - World champion Sebastien Loeb won his fourth successive Rally of Argentina on Sunday but admitted that the South American rain, fog and mud had transformed the race into the toughest he had ever faced.

The French Citroen driver, who also won the previous round in Mexico, finished 2min 33sec ahead of Australia's Chris Atkinson, in a Subaru Impreza, with Spain's Dani Sordo, in another Citroen, taking third place, 4min 4sec off the lead.

It was Loeb's 39th career victory in the world championship, another record for a man who has won the last four world titles.

He also took over the lead of the championship from Ford Focus driver Mikko Hirvonen who was fifth here after never recovering from mechanical problems on the opening day.

"I like difficult conditions but I thought today's were the hardest I've ever faced," said Loeb who vented his anger over the weekend at the rule which demands drivers to use hard compound tyres despite the torrential rain and cloying mud.

"The conditions were extremely bad today, but throughout the event we've had some extremely tricky weather too. It seems to have been raining all the time and with the fog and the mud on the road it was very difficult.

"We had a good fight on the first day," added the Frenchman.

"But after that we were in the lead and had to get to the finish - but with the hard compound tyres that was a very tough job.

"In some places it was very hard to keep the car on the road at all. Yes, we see fog, rain and mud on other rallies, but up to now we've always been able to choose an appropriate tyre for the conditions. I hope we can do something to improve the limited options we have now."

The 2003 world champion Petter Solberg, who had been in second place overnight, saw his hopes of a podium finish dashed halfway though Sunday's opening stage when electrical failure brought his Subaru Impreza to a halt.

Solberg had started the final day 48sec ahead of Subaru teammate Atkinson.

Solberg and Atkinson had been on course to record Subaru's first double podium since the Rally of Great Britain in 2003.

Atkinson said that while he was happy to be up to second overall, his team-mate's retirement was a blow for the Subaru camp.

"Personally speaking, a possible three podiums from four rallies feels great, but of course we were hoping for a double celebration at Subaru," said the Australian.

"Petter's retirement is a big disappointment for the whole team."

Five-time champion Valentino Rossi won his first MotoGP race of 2008 with a superb performance in Shanghai.

The Italian legend set a succession of lap records in cool, slightly damp conditions, shaking off the persistent Dani Pedrosa, who takes over the championship lead.

Ducati's Casey Stoner finished some way back in third ahead of the heroic Jorge Lorenzo, who broke his ankle in a horrifying crash on Friday but raced on to claim fourth.
More

Yamaha's Valentino Rossi followed his win in China with victory at the French MotoGP to move to the top of the world championship standings.
The seven-time world champion never looked back after overtaking Casey Stoner on lap eight, becoming the first rider to win two races this season.
Jorge Lorenzo did superbly to finish in second place ahead of Colin Edwards, despite having two fractured ankles

More
You must log in or register to reply here.

Re: Kwa wale wanaopenda achievement in Academics Read this CV
2