Microsoft to Pay $31 Per Share for Yahoo, Totaling $44.6 Billion in Cash and Stock

REDMOND, Wash. (AP) -- Microsoft Corp. offered to buy search engine operator Yahoo Inc. for $44.6 billion in cash and stock in a move to boost its competitive edge in the online services market.

I think Microsoft's search engines have failed to compete against google... the only option to them is to buy Yahoo, what a clever move... but I am not sure whether this will prove successful either, a lot have been tried by them to counter google but ain't working,

google have got youtube and have just announced that they are going to use that as an advertising tool to which profits will be shared between them and persons posting the videos. google web applications are on the rise, what a beast microsoft have just awakened to!!

Very true Icadon, infact they came up with some resource (processor time) hogging tool called 'ms indexing too', I have it but have turned off.

Hawa Microsoft watakoma, kila kona wanayokata chupi zinawabana, nevertheless, inafurahisha sana kuona competition inafanyika kwa nguvu kama hivi.. Ooh, another thing they should be alerted to is the inklings of google to having their own operating system.... it is on its way if iam not mistaken!! Now combine that furore with the likes of Mac OS X, Open Office, Dell's support for Ubuntu, Dual boot Macs (infact triple boot Mac is the possibility as I speak!!), and the trivial-annoying social phenomenon propelled by myspace, facebook etc.. Surely, finally Microsoft have this time around got a competition!

This thing is affecting everything, Even the Dollar and OIL.

Microsoft said it had offered to buy Yahoo for $31 per share, which it said represented a 62 percent premium above the company's closing stock price on Nasdaq on Thursday.

"We have great respect for Yahoo, and together we can offer an increasingly exciting set of solutions for consumers, publishers and advertisers while becoming better positioned to compete in the online services market," Microsoft Chief Executive Steve Ballmer said in a statement.

Microsoft said it had identified four areas that would generate at least $1 billion in annual synergies for the combined entity.

SteveD said:
Very true Icadon, infact they came up with some resource (processor time) hogging tool called 'ms indexing too', I have it but have turned off.

Hawa Microsoft watakoma, kila kona wanayokata chupi zinawabana, nevertheless, inafurahisha sana kuona competition inafanyika kwa nguvu kama hivi.. Ooh, another thing they should be alerted to is the inklings of google to having their own operating system.... it is on its way if iam not mistaken!! Now combine that furore with the likes of Mac OS X, Open Office, Dell's support for Ubuntu, Dual boot Macs (infact triple boot Mac is the possibility as I speak!!), and the trivial-annoying social phenomenon propelled by myspace, facebook etc.. Surely, finally Microsoft have this time around got a competition!

..i think they should welcome and embrace change and not fight it

Several newspapers and news agencies say Yahoo's board will on Monday dismiss the $44.6bn (£22.9bn) offer as being inadequate.

When it was made, Microsoft's $31 a share offer was 62% above the level at which Yahoo's shares were trading.

Yahoo's shares closed on Friday at $29.20, which may suggest doubt that the offer will be successful or that a higher price will be offered.

A source quoted by the Wall Street Journal said that Yahoo's board would be unlikely to consider anything below $40 per share.

A $40 a share offer would be a 109% premium to the $19.18 closing price of Yahoo's shares the day before the original offer was announced.

Yahoo's shares have not traded above $40 for two years.

Although its shares have fallen sharply since then, Yahoo's websites remain among the world's most popular.

Yahoo's share price falls have come as it has struggled to compete with Google, which has also been a big competitor for Microsoft.

Microsoft's shares have fallen 12% since it made its offer, which may reflect concerns that it has already offered too much or that such a large deal would distract its management away from its core software business.

As a result of the falling share price, Microsoft's cash and share offer is now only worth $41.8bn.

Microsoft and Yahoo have both declined to comment on the reports.

Yahoo should embrace themselves for this snap idea from MICROSOFT.

As it rejected the Microsoft offer, Yahoo said that the deal undervalued its brand, audience, investments in advertising platforms and future growth prospects, free cash flow and earnings potential.

Yahoo will continue to grow as a single Platform of its own entity.

Microsoft is contemplating a hostile takeover of Yahoo!!

Microsoft anataka kuendeleza umonopoly wake tuu. Bill anaogopa expansion ya Google, and he knows kwamba he can't depend on new software that come every three to four years. He need liquidity to maintain daily to daily basis, so kumchukua Yahoo kutaongeza erning zao sababu they will benefit kutoka na matangazo and other things.

Microsoft walks away from Yahoo
Software giant Microsoft has dropped its three-month-old bid to buy internet firm Yahoo because the two sides cannot agree on an acceptable sale price.
Mr Ballmer said Microsoft had raised its original offer from $44.6bn to $47.5bn (£24.1bn) - $33 per share.

But he added that Yahoo had insisted on at least $53bn, or $37 a share - more than Microsoft was prepared to pay.

poor Yang!!I'd hate to be him right now.lets see how ego can help him this time around.

Analysts believe Yahoo Inc.'s stock price will surrender most, perhaps all, of its 50 percent gain since Microsoft Corp. made its initial offer on Jan. 31 in an effort to challenge online advertising and search leader Google Inc. The anticipated sell-off would leave Yahoo's market value hovering around $30 billion.

Last-ditch talks between Yahoo and Microsoft were fruitless, leading Microsoft to walk away from a deal Saturday.

Microsoft shares rose 2.3 percent, or 66 cents, to $29.30. The shares had declined 10 percent to $29.24 since the bid, reflecting concerns that the proposed marriage would turn into a complicated mess that would enable Google to grow even stronger.


The proposed link-up between Microsoft and Yahoo has been approved by European regulators, paving the way for the two companies to combine their search engines and take on Google together. 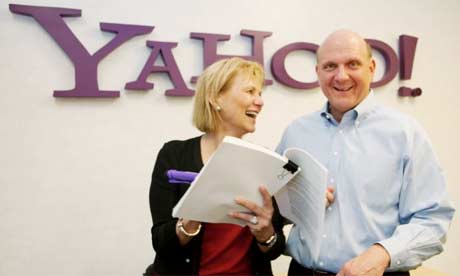 Senior figures said that plans to implement the 10-year agreement, which was first announced last summer, were now underway after the European Commission said it did not believe the deal would harm consumers. The US Department of Justice had previously said that it was happy with the proposal.

Under the terms of the agreement, Microsoft's technology will now power Yahoo search, with the two companies sharing revenue generated by the site.

Yahoo chief executive Carol Bartz, who brokered the deal soon after being installed in the job last year, said that the idea was to allow her company to focus on providing services that internet users enjoyed - not on developing the technology.

"This breakthrough search alliance means Yahoo can focus even more on our own innovative search experience," she said in a statement.

Microsoft chief executive Steve Ballmer said that the two companies could offer better competition to Google together than separately.

"Although we are just at the beginning of this process, we have reached an exciting milestone," he said. "I believe that together, Microsoft and Yahoo will promote more choice, better value and greater innovation to our customers as well as to our advertisers and publishers."

The approval marks the latest step forward in an arduous process that first started more than two years ago with Microsoft's surprise $44bn bid to buy Yahoo outright.

While Microsoft submitted a renewed bid shortly afterwards, Yang attempted to engineer a deal with Google that would fend off the software giant - only to see Google pull out after the agreement was questioned by US regulators.

Yang stood aside in January last year to be replaced by Bartz, while at the same time Microsoft relaunched its own search engine under the name Bing and began investing heavily in marketing as it attempts to claw back market share from Google.

In a posting on Yahoo's website, the head of the company's search team said it was "full steam ahead".

"With Microsoft providing us the underlying list of search results, our Yahoo team can now focus on making the overall experience of finding stuff online and getting things done easier for you," said Shashi Seth, the company's senior vice president of search products.

Despite its troubles in recent years, Yahoo remains the world's second-largest search engine. In the US, Google is responsible for 66% of all searches, with Yahoo significantly behind with 17.5% and Microsoft trailing in third place with 10%.

According to worldwide figures from web company StatCounter, however, the gap is even wider globally - with Google receiving around 90% of searches, Yahoo 4% and Bing 3.4%.

The deal is still pending approval from authorities in Asia, but the first full implementation of the joint agreement is not expected to be in place until 2012.

Source: The Guardian UK.
You must log in or register to reply here.