The 1,224 km long SGR RAILWAY line construction in Tanzania
Yapı Merkezi is constructing the fastest railway in East Africa. The first phase of the 1,224 km total line, the 202 km long Dar Es Salaam - Morogoro Railway Project, is the most critical part of the project. When the 5-part line is completed, it will connect Uganda, Rwanda, Democratic Republic of Congo and Tanzania, and provide access to the Indian Ocean for all related countries.

The groundbreaking ceremony took place on on April 12, 2017 at Pugu with the participation of HE Dr. John Pombe Joseph Magufuli as President and Commander in Chief of the Armed Forces of the United Republic of Tanzania, Hon. Prof. Makame Mbarawa as Minister of Works, Transport and Communication, Mr. Yunus Belet as acting Ambassador of Republic of Turkey in Dar Es Salaam, Mr. Erdem Arıoğlu as Vice Chairman of Yapı Merkezi, Mr. Özge Arıoğlu as CEO of Yapı Merkezi, Mr. Emre Aykar as Yapı Merkezi Board Member and , Mr. Abdullah Kılıç as Yapı Merkezi East Africa Regional Manager.

All works pertaining to design, manufacture, assembly and operation startup of track superstructure, electrification, signaling, telecommunication, central control systems are being carried out by Yapı Merkezi.

202 km-long single line will be constructed at a design speed of 160 km / h between Dar Es Salaam and Morogoro. During the 30-month project, a total of 33 million cubic meters of excavation work will be undertaken; 96 pieces of 6,500 meter-long bridge and overpasses, 460 culverts, 6 stations and repair and maintenance workshops will be constructed.
Yapı Merkezi İnşaat ve Sanayi A.Ş.
Click to expand...

About Yapi Merkezi: YM is ranked as 78th in 2017 in the Top International Contractor’s List prepared by monthly magazine Engineering News Record (ENR). 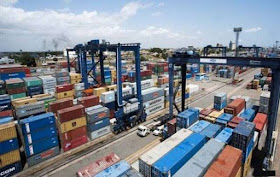 AS the construction of a new dry port at Kwala Village in Ruvu- Vigwaza area in Coast Region goes on, a new urban business centre is likely to emerge and sprawl, giving the area a new face.

Authorities in Kibaha District, Coast Region have begun scratching their heads on how to capitalise on the opportunity to expand the region’s economy.


The 500-hectre dry port, whose operations are planned to kick off early next January, is posed to attract a number of businesses ranging from car parks to restaurants, accommodation and other recreational facilities.

The ‘Sunday News’ recently visited the dry port construction site, witnessing huge business potential in case authorities in Coast Region come up with an affirmative plan to invite entities and businesspersons to invest in such facilities to provide social services.

Ms Tatu Selemani, Kibaha District Council Executive Director, spoke to the ‘Sunday News’, providing hints on how to capitalise on the opportunity.

“We have already seen the business potential that will be brought about by the dry port once it becomes operational,” she said. According to Ms Selemani, the district council together with the office of the Regional Commissioner (RC) are planning to consult other authorities, including the Ministry of Agriculture, Livestock and Fisheries and Kwala Village government in Kibaha District to facilitate land acquisition.

“The land we are talking about is within the ranch that administratively falls under the Ministry of Agriculture, Livestock and Fisheries.

It should also be remembered that the area is within a village called Kwala, an indication that both authorities must be consulted before acquiring the land,” she said.

Upon completion of land acquisition procedures, the district council will survey it to earmark plots for sale to investors.

Speaking about the challenge posed by a 15-kilometre road that branch off at Ruvu area from Dar es Salaam- Morogoro highway to the dry port, Ms Selemani said already they have written the Ministry of Works, Transport and Communications, asking it to upgrade the status of the stretch so that it is maintained by Tanzania National Road Agency (Tanroads).

“Currently, the road is maintained by Tanzania Rural-Urban Road Agency (Tarura), but we have presented the request to the ministry, through Tarura regional manager, so that Tanroads can take over the responsibility of maintaining it,” she explained.

However, he said the District Council must come up with a larger area development Master Plan that will incorporate the dry port’s plan, clearly indicating how and where commercial complexes and other structures should be built.

“Upon coming up with the larger Master Plan of the area, the District Council then invites people like us (real estate developers) to construct structures that will support the operations of the terminal,” he said.

The dry port, currently under construction by SUMA JKT, will start operations next January in an area covering 60 hectares, equivalent to 600,000 square metres, out of the total area of 500 hectares earmarked for the whole project.

“This means that all haulage trucks that have been causing traffic jams in Dar es Salaam as they travel to the port to collect cargo before transporting it to the respective destinations will end up in the Coast Region,” he said.

According to Engineer Kakoko, at initial stage of operation the dry port will be able to handle 1 million containers at once, insisting that its capacity will increase as expansion goes on.

“When the dry port becomes operational next January, containerised cargo destined for upcountry and Great Lakes states will be brought here. Customers will now be collecting their cargo right from here, easing congestion in Dar es Salaam, speeding up cargo delivery as well as reducing costs to our valued customers,” DG Kakoko was quoted as saying