WHAT EXACTLY IS RO - RO services 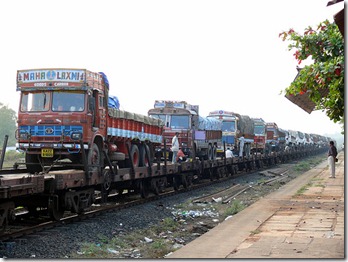 Last weekend, I went to Ratnagiri with a couple of friends. We drove over NH 17, all the way from Mumbai to Hatkhamba.
This is one of the best times to drive on this road. The route goes up and down the hills and valleys. The whole landscape is wet and green. The number of shades of green that you get to see is unbelievable. This is the paddy region. So the fields are flooded with water. You see numerous rivulets and waterfalls on the way. I was getting very nostalgic. This was the route on which I had cycled from Mumbai to Goa. We actually saw a group of people cycling between Mahad & Chiplun and I was tempted to do the trip once more.

We stopped for Lunch between Kolad and Mahad. As we were eating, we heard the typical sound of a passing train. When we turned to see the train, we didnt see bogies, but a series of trucks. The sight was confusing. The trucks were all moving at the same speed, in a straight line making the sound of a train! Then it dawned on us. The trucks were travelling on a train.

I was intrigued. Why put trucks on a train? How many trucks are transported? How are they put on the train? So I decided to do some research and what I learnt was quite amazing.

This scheme of Konkan Railway, known as RO-RO (roll-on roll-off), was started on 26th January, 1999, has enabled carrying loaded trucks directly on the railway wagons thus reducing the expenditure and savings on Fuel, wear and tear of tyres, maintenance of trucks for the truck operators.

Trucks are loaded through a ramp provided at the dead-end of a loop on BRN wagons which have been suitably modified for through passage of trucks over them. Before loading over the BRNs, the trucks are weighed and passed under a height gauge (maximum height  3.4 metres above road level) to ensure that they conform to the maximum moving dimensions for safe passage. The driver and cleaner of the truck travel along, sleeping in their truck cabin. The trucks are firmly mounted on the flat bed.

You can see a video showing the trucks being loaded on the train here.
The service is available between Kolad ,145 Km from Mumbai, and Verna, a total distance of 417 kms. Between Kolad and Suratkal (721 Km), Verna and Suratkal (304 Kms). Delivery by Ro Ro is within 12 hours for Kolad-Verna, within 20 hrs for Kolad-Surathkal, and five hrs for Verna- Surathkal, which by road would take at least about 24, 40 and 10 hours respectively. During last five years the number of trucks carried increased from 18,172(2005-06) to 37,620 (2009-10). It has also reduced the truck traffic and the pollution on the NH-17.

source: Ro-ro service konkan rail youtube
Last edited by a moderator: Jan 4, 2016
You must log in or register to reply here.