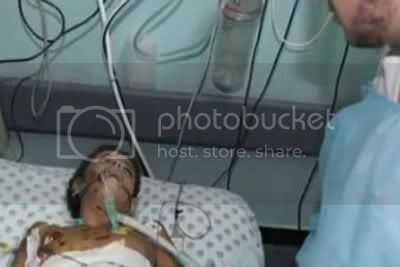 Over and over, throughout its coverage of the Palestinian-Israeli conflict, the Zionist media have proven time and time again that as far as they are concerned the lives of Jewish children are the only ones that matter. Here, in the death of 12-year-old Ibrahim Zaza, we see another painful example of this.

By Ramzy Baroud
Both of Ibrahim's arms were cut off. He had a hole in his lung. Parts of his legs were missing. His kidney was in a bad conditionwe need people to stand with us. These were the words of an exhausted man as he described the condition of his dying son in an interview with The Real News, an alternative news source.

Ibrahim Zaza was merely a 12-year-old boy. He and his cousin Mohammed, 14, were hit by an Israeli missile in Gaza, fired from an unmanned drone as they played in front of their house.

The story started on August 18. The next day, the British Telegraph reported: Israel launches fightback after militant attack on Egypt border. The whitewashing of the recent Israeli strikesat besieged Gaza leaves one wondering if all reporters used Israeli army talking points as they conveyed the story. Palestinians were punished for an attack at Israelis that reportedly accrued near the Israeli border with Egypt. There is no evidence linking Gaza to the attack, and Egyptian authorities are now disputing the Israeli account altogether.

At least six Palestinians were killed in the first wave of bombing. Israel said they were members, including the leader, of the militant group known as the Popular Resistance Committees it accused of responsibility for the attacks, wrote Phoebe Greenwood and Richard Spencer (The Telegraph, August 19).

The Popular Resistance Committees had dissociated themselves from the attack, as had Hamas and all Palestinian factions. But that was hardly enough to spare the lives of innocent men and women in Gaza, already reeling under untold hardship. Among the dead in the first wave of attacks that targeted 'militants' were two children, one aged three and the other 13.

In the media, Palestinian casualties only matter when they amount to a sizable number. Even then, they are placed within a context that deprives the victims of any sympathy, or worse, blames Palestinian militants for indirect responsibility (pushing Israel to resort to violence to defend its security). In fact, the term 'Palestinian security' is almost nonexistent, although thousands of Gazans have been killed in the last three years alone.

Even the news of Palestinian children killed in the August strikes was reported with a sense of vagueness and doubt. News networks downplayed the fact that the majority of Palestinian victims were civilians. The Telegraph reported that: Hamas, which runs Gaza, said that two children were also killed in the air raids Quoting Hamas, not human rights groups or hospital sources, is hardly shocking when the reporter is based in Tel Aviv or Jerusalem.

Neither was it shocking when the boy, Ibrahim Zaza, died. His heart was the only organ that had continued to function for nearly thirty days after the drone attack. The father, who was allowed to accompany Ibrahim and Mohammed to an Israeli hospital, was then prevented from leaving the hospital for he constituted a security threat. He kept circulating around his son's frail body, hoping and praying. He appealed to people to stand by his family, stressing his lack of means to buy a wheelchair, which he thought Ibrahim would need once he woke up again.

There is no need for a wheelchair now. And Mohammed's unyielding pain continues. His legs are bare with no skin. His belly area is completely exposed. His screams are haunting.

Ibrahim's death seemed to compel little, if any, media coverage. There were no New York Times features, no Time magazine pictorials of the weeping mother and the devastated community. Ibrahim's existence in this world was short. His death was mostly uneventful outside the small circle of those who dearly loved him.

There will be no debates on Israel's use of airstrikes that kill civilians, and no urgent UN meetings over the incessant killings caused by Israeli drones, which in themselves constitute a highly profitable industry. Clients who have doubts about the effectiveness of the Elbit Systems Hermes 900 UAV, for example, need only view Israeli Air Force videos of the drone gently gliding over Gaza. According to sUAS News, it can reach a higher altitude of 30,000 feet(and) can be quickly and easily converted for the operator's needs, without the need to adjust the operating infrastructure for every mission (June 6, 2011).

Israel has been testing its drones on Palestinians for years. In Gaza, these vultures can be observed with the naked eye. Whenever the glider draws near, people scramble for cover. But it took a WikiLeaks report to verify Israel's use of drones for the purpose of killing. According to a recently leaked document, Israeli army Advocate-General Maj. Gen. Avichai Mandelblit had, in February 2010, informed previous US Ambassador to Israel, James Cunningham, of Israel's use of weaponized unmanned aircraft to kill suspected militants.

In The Real News video report, Lia Tarachansky spoke to Lt. Col. Avital Leibowitz, a spokesperson for the IDF, to try and understand why Ibrahim and his cousin were targeted.

Lia Tarachansky: There was only one missile shot, according to witnesses, and it was at two children, one 12 and one 14, sitting outside of their house.

Avital Leibowitz: The logic is that when someone is trying to launch a rocket at you, then the logic is - we better target that person before he targets us.

The one photo I could retrieve of Ibrahim Zaza showed him posing shyly for the camera, his hair brushed forward. My heart breaks now as I think of him, and all the other victims of Israel's logic.

- Ramzy Baroud (Ramzy Baroud: Books, Articles, News, Images and More) is an internationally-syndicated columnist and the editor of PalestineChronicle.com. His latest book is My Father Was a Freedom Fighter: Gaza's Untold Story (Pluto Press, London), available on Amazon.com.

Here is the video from The Real News discussed in the above article: