Marion Jones what a price?

Marion Jones was one of the most accomplished athletes in the world when she won five medals at the Sydney Olympics in 2000. On Monday, she gave up those medals as part of her punishment for cheating with drugs.

Jones recently pleaded guilty in New York to lying to federal agents about her steroid use.

Outside the courthouse on Oct. 5, Jones broke down in tears as she apologized for her actions and announced her retirement following her guilty plea. "I have let my country down, and I have let myself down," she said.

Here, Jones celebrates as she wins the 100-meter gold medal at the 2000 Games in Sydney, Australia. She faces up to six months in jail time for three counts of lying to federal agents about using steroids.

Jones, here at the 2004 Olympics in Athens, Greece, was also remorseful to friends and family. "I want to apologize for all of this. I am sorry for disappointing you all in so many ways," she wrote in a letter.

Jones, who is now reportedly broke, was one of the first female track stars to earn millions. She typically earned $80,000 per race during her prime in addition to her endorsement deals.

The trouble started for Jones back in 2003, when she, boyfriend Tim Montgomery, right, and a host of other top athletes were connected to the BALCO drug controversy.

In December 2004, Victor Conte, the founder of BALCO, appeared in an interview on ABC's "20/20" and said that he gave Jones five different illegal performance-enhancing drugs before the 2000 Olympics.

At the USA Track and Field Championships in 2006, a sample of Jones' urine tested positive for a banned substance. Jones was later cleared when a backup sample tested negative.​
Source: AP, New York Times, Wikipedia

Posted: 2007-10-09 06:27:16
(Oct. 9) - Little by little, the remnants of Marion Jones' once glorious career are being stripped away.
Jones gave back the five medals she won at the Sydney Olympics on Monday following her admission that she was a drug cheat, and also agreed to forfeit all results, medals and prizes dating back to Sept. 1, 2000.

"I'm pleased that it was resolved efficiently," said Travis Tygart, chief executive officer of the U.S. Anti-Doping Agency. "And at the end of the day, I hope it's a good lesson that will have a dramatic deterrent effect on all athletes who may be tempted to dope."

The U.S. Olympic Committee now will return the medals to the International Olympic Committee, which will decide what to do with them. Jones won golds in the 100 meters, 200 meters and the 1,600 relay in Sydney, as well as bronzes in the 400 relay and long jump.

No one answered the door Monday at Jones' house in Austin, Texas.
Jones' relay teammates also should give back their medals, USOC chairman Peter Ueberroth said. Though there is precedent for not punishing an entire team, the race was tainted, Ueberroth said.

Jearl Miles-Clark, Monique Hennagan, Tasha Colander-Richardson and Andrea Anderson all won golds as part of the 1,600-meter relay. Chryste Gaines, Torri Edwards, Nanceen Perry and Passion Richardson were on the 400-meter relay team. Both Edwards and Gaines have served doping bans since the 2000 Olympics.

"It's our opinion that when any sporting event is won unfairly, it's completely tarnished and should be returned. The relay events were won unfairly," Ueberroth said. "We don't have the jurisdiction on that matter. If we did, we would be on the side of returning the medals."

The USOC has not talked to the other athletes yet about giving up their medals. Fielding a clean team is a priority for a country trying to improve its image in the Olympic movement - not to mention win the 2016 Games - and drug cheats like Jones have been an embarrassment for the USOC. Jones was one of the most celebrated female athletes in the world, and she vehemently denied any doping allegations.

Athens gold medalist Justin Gatlin faces a ban of up to eight years after testing positive for testosterone and other steroids in April 2006 - one month before tying the then 100-meter world record. But the USOC and USADA have worked hard to rid the U.S. team of cheats, and Ueberroth pledged Monday that the American athletes at next summer's Beijing Olympics will be drug-free. The USOC also sent letters apologizing to 205 national Olympic committees and the people of Australia.

"Even though it is a negative going back, this will be viewed as positive in our commitment to fielding a clean team," USOC CEO Jim Scherr said of Jones' punishment. After long denying she ever had used performance-enhancing drugs, Jones admitted Friday that she'd taken the designer steroid "the clear" from September 2000 to July 2001. "The clear" has been linked to BALCO, the lab at the center of the steroids scandal in professional sports.

Jones' admission came as part of her guilty plea to lying to federal investigators about using steroids. She will be sentenced on Jan. 11, and prosecutors had suggested to Jones the prison term would be a maximum of six months. Though Jones announced her retirement after Friday's court hearing, she accepted a two-year ban Monday and agreed to forfeit any results dating back to Sept. 1, 2000. That includes the two golds (200 and 400 relay) and silver (100) she won at the 2001 championships in Edmonton.

She stands to lose more. Scherr said the USOC plans to go after Jones for prize money it awarded her, about $100,000.

The International Association of Athletics Federations rules also allow for athletes busted for doping to be asked to pay back prize money and appearance fees. British sprinter Dwain Chambers, who admitted using the clear, had to pay back a reported $230,615 before he was allowed to return to competition after a two-year ban.

Jones would have earned millions in prizes, bonuses and fees from meets all over the world, including a share of the $1 million Golden League jackpot in 2001 and 2002.

If the IOC does nullify Jones' results in Sydney, the standings likely will be readjusted, with the second-place finisher moving up to gold, third to silver and fourth to bronze. Jamaica won silver in the 1,600 relay, and France was fourth in the 400. Pauline Davis-Thompson of the Bahamas was the silver medalist in the 200 meters, and Tatiana Kotova of Russia was fourth in the long jump.

The silver medalist in the 100 meters in Sydney was Greek sprinter Katerina Thanou - at the center of a major doping scandal at the Athens Olympics. She and fellow Greek runner Kostas Kenteris failed to show up for drug tests on the eve of the games, claimed they were injured in a motorcycle accident and eventually pulled out. Both later were suspended for two years.

"Obviously we're concerned about a level playing field all the time. But we have no jurisdiction or nothing to say about that," Ueberroth said. "We have a responsibility to compete fairly. That's our system, and that's the way we're going to live."

AP Sports Writers Stephen Wilson in London and Rachel Cohen in New York, and Associated Press Writer April Castro in Austin, Texas, contributed to this report. Copyright 2007 The Associated Press. The information contained in the AP news report may not be published, broadcast, rewritten or otherwise distributed without the prior written authority of The Associated Press. All active hyperlinks have been inserted by AOL.
Click to expand...

Who will be next I wonder?

It hurts, but again that is the price you pay... See you in six months pretty!

Disgraced sprinter Marion Jones has been sentenced to six months in prison for lying to federal prosecutors about her steroid use, a stunning downfall for the five-time Olympic medallist.

US District Court Judge Kenneth Karas imposed the sentence after Jones pleaded guilty to two charges last October, when she retired from athletics and tearfully confessed to betraying the trust of her fans after years of denying she used performance enhancing drugs.

"Your honour, I absolutely realize the gravity of these offences and I am deeply sorry," Jones told the judge, crying as she begged not to be separated from her two young sons.

"I pray that you be as merciful as a human being can be."

After hearing her punishment, Jones sobbed into the shoulder of her husband, Olympic sprinter Obadele Thompson.

She has until March to turn herself over to authorities.

"I truly hope that people will learn from my mistakes," she said later in a brief statement to reporters.

Jones, 32, has been stripped of the five athletics medals she won in the Sydney Olympics, three of them gold. All her performances as of September 2000 have been erased from the record books.

She confessed to lying to investigators in 2003 when she denied knowing that she swallowed the banned substance tetrahydrogestrinone (THG), known as "the clear," before the 2000 Olympics.

Karas noted the elevated status of athletes in society and said using drugs sent the wrong message. He said he did not believe Jones' statement in October when she said she did not realize she was taking steroids until after the 2000 Games.

Jones had told the judge she believed she was ingesting flaxseed oil until July 2001, and suspected it had been a performance enhancer only when she was unable to train as intensively and did not recover as quickly after she stopped taking the substance.

"That is very difficult to believe, that a top-notch athlete, knowing that a razor-thin margin makes the difference, would not be keenly aware of what he or she put in her body," Karas said. "It was a troubling statement."

Jones, whose image from a triumphant Sydney Games was enhanced by a winning smile and joyous celebrations, now has become the biggest name in world sport to admit using steroids.

"Today's sentencing concludes a sad series of events," USA Track & Field Federation said in a statement. "It is a vivid morality play that graphically illustrates the wages of cheating in any facet of life, on or off the track."

Prosecutors had agreed to a light sentence because Jones was prepared to co-operate in a separate investigation of her former coach and onetime Olympic relay gold medallist, Steve Riddick. He is also due to be sentenced on Friday bank fraud.

Jones once pulled in millions of dollars in product endorsements but is now in financial ruin.

The case comes amid other steroid scandals in US sport, including a special report by former Sen. George Mitchell last month that named nearly 90 baseball players as suspected steroid users.

Major League Baseball home-run king Barry Bonds is under indictment for a similar offence, accused of lying to federal investigators about his steroid use. He has pleaded innocent and denies he ever used performance-enhancing drugs.

Like Bonds, Jones was ensnared in a federal probe into California's now-defunct BALCO lab that disgraced elite athletes in several sports.
Click to expand...

A gigantic lesson for young athletes. Millions of us were swept away with her lovely smile, charisma and amazing performance in 2000 olympics. The memories of me and my sisters cheering her up on the telly every time she was on the truck are still fresh in my head, I wish I knew the truth by then, I cant believe it was all 'cheating'!
But why did it take so long for her to be convicted?
M 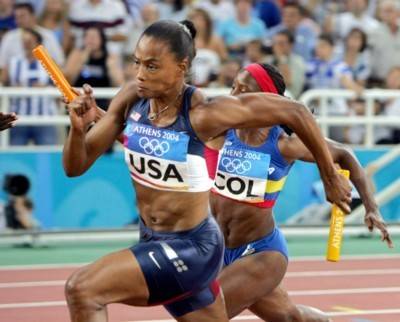