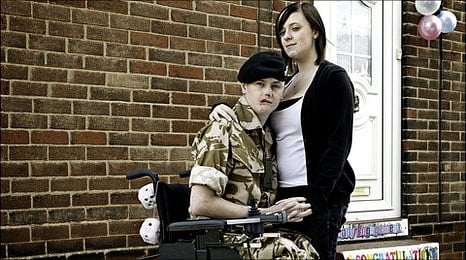 Three weeks after 19-year-old rifleman Craig Wood proposed to his 17-year-old girlfriend Vicky Swales, he was blown up by a wire-detonated roadside bomb on his first patrol back in Afghanistan.
Vicky Swales, from York, was faced with a big decision. She was staying at the same caravan park in Brandesburton, Yorkshire where she had first met her fiance, when she heard the news in July, 2009 that he was critically injured.
"Craig's Dad came round and says 'Vicky I think you should sit down. He's seriously injured and he's been involved in a bomb'.
"I was shocked because it's one of the things you don't think is actually going to happen," she said.

Getting Craig dressed was one of Vicky's many jobs
Craig survived but lost both legs and an arm, becoming one of only four triple amputees in the military. Since 2001, 345 British soldiers have died in operations in Afghanistan.
Proud of her "man in uniform", Vicky had to decide whether she could offer the support and help he needed.
She decided to stay and become his carer - a tough ask for someone of any age coping with a partner with traumatic injuries.
Vicky admitted she was shocked when she first saw Craig in hospital Selly Oak Hospital, which is part of Queen Elizabeth Hospital in Birmingham.
"He looked like a little child. It nearly killed me," she said.
The hospital treats 520,000 patients each year, military and civilian.
Continue reading the main story Start Quote


I'm constantly lifting him, moving him about, doing this, doing that... and then at the end of the month I'm absolutely exhausted
​
End Quote Vicky Swales Teenage carer
According to figures from the Ministry of Defence Analytical Services and Advice (DASA) website, the medical staff have treated 218 very seriously injured and 222 seriously injured service personnel from Afghanistan between 2006 and October 2010.
Some critically injured soldiers say it is too much to ask of any girlfriend, to stick around while they learn to walk, talk and adjust to civillian life. But could this young couple prove the doubters wrong?
While struggling with the extent of his own injuries, Craig asked Vicky if she wanted to split up.
He said: "I thought she was just going to say I don't want you anymore. I was just so scared that she was going to leave me."
But she did not hesitate.
"I was just sat there going, 'I don't want to leave him. I want us to be together'. It has actually made us, me, feel stronger," she said.
Wood admitted he was amazed at her strength.
"It has been really hard for her. I honestly don't know how she copes.
"Once every week or whatever, I'll just sit there and just turn to Vicky and say, 'Oh Vicky can I have a hug?' And I'll just end up crying."
Craig was awarded a compensation package of more than £500,000, and has been given donations from the public.
Continue reading the main story FIND OUT MORE

It meant that he was able to buy a house, which gave the couple the kind of independence unavailable to most teenagers.
But living together presented other challenges for Vicky.
"We're new to this, so it's like we're obviously going to do a few things wrong, I don't even know how to pay a bill."
As his carer Vicky had to get Craig ready in the morning, cook his meals and do all the chores, as well as carry him up the stairs of the two-storey house.
She said: "I'm doing four times as much as I was doing a few years ago.
"I'm constantly lifting him, moving him about, doing this, doing that, running around after him, just keep on going, and then at the end of the month I'm absolutely exhausted.
"But I'm doing it for Craig. I worry about his welfare before mine."
In some ways Vicky had to put her life on hold to look after Mr Wood. As a carer she cannot work, and moving from her parents' house in York to Doncaster meant she lost touch with friends.
She had to put on a brave face when none of her friends from York attended their engagement party.
"I find it hard knowing that your mates are a bit worried to see Craig. 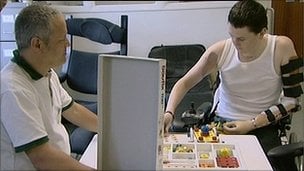 Craig is learning how to use a robotic hand
"Not a lot of people are ready to see someone who is as injured as Craig, you know it's not something you see every day which I understand.
"It was hard enough for me so imagine what it's going to be like for friends."
The couple had to face more medical hurdles, when Craig underwent an operation on his legs because his bones were still growing.
He contracted MRSA and septicaemia, leaving him critically ill.
"I've just realised it is going to be harder than it was before," said Vicky.
"We think he's going to have more operations on his other legs, he's going to have more operations on his arms because he can't move one of them."
Eventually, with stresses and problems that would be a struggle for most people to cope with, the teenagers split up.
Vicky said: "There's so much more to deal with, it's hard, it's really hard and whoever thinks it's easy, they're really wrong."
My Boyfriend the War Hero is on BBC3 2100 GMT Thursday 2 December. Or watch it afterwards on BBC iPlayer.

What a test....!!
You must log in or register to reply here.