Man Cuts Car in Half in a Clamp Protest!!!


A man has sawn his car in half with an angle-grinder in protest at it being clamped outside his home.

Ian Taylor, from Tredworth, Glos, said the untaxed Ford Fiesta was parked on his drive with only part of a rear wheel poking out on to the pavement.
The 40-year-old builder said the vehicle was going to be scrapped anyway, but he wanted to make a point.


A spokesman for NCP Services said half of the car was parked on the road and should therefore have been taxed. 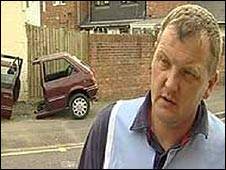 ​
'Jobsworths'
Mr Taylor bought the Fiesta for his stepson with the intention of restoring it, but it was beyond economical repair.


"I told [my stepson] not to bother, so we parked it up, we were going to get rid of it. I came home from work the other day and it'd been clamped," he said.


Mr Taylor said he made several efforts to explain that the car had a SORN (Statutory Off Road Notification) certificate verifying it had not been driven on the road and that it had been parked on his drive.


"[I'm] happy I got one over on them. They're jobsworths, for the sake of an inch and a half on the path."


James Pritchard, communications manager for NCP Services, said clamping staff had photographs to prove that half the car was on the public pavement.


"We were astonished at the reaction this gentleman had to the fact we put a clamp on his car.

"It was a remarkable incident which highlighted some of the problems my colleagues face while they're doing what is a very important job in ensuring that motorists tax their vehicle," he said.


"And in cutting his car in two, he managed to put both himself at risk and also a number of bystanders - along with ourselves, the police had to be called and the fire brigade, as he set fire to the car while cutting it in two.
"Fortunately, the only damage was done to his car and as far as our people are concerned we stand by what they did."
Ian Taylor was so angry at getting a ticket that he chopped his car in half