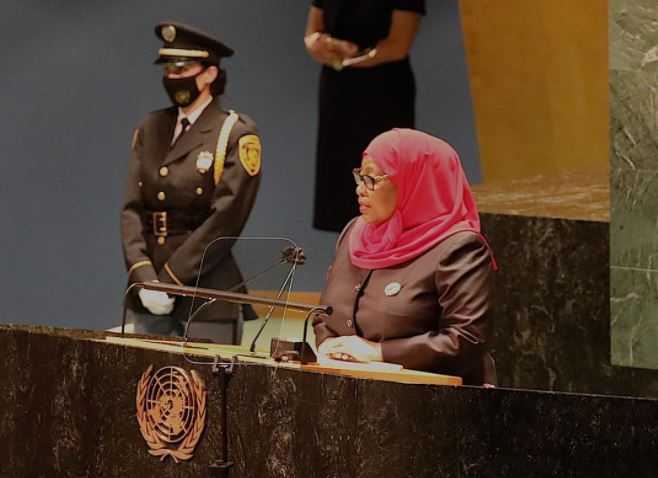 President Samia's speech among seven most important at UNGA 2021

President’s Samia Suluhu Hassan’s maiden speech at the United Nations General Assembly (Unga), has been mentioned among the seven most important during the session.

President Samia's speech among seven most important at UNGA 2021

Samia becomes one of the few female heads of State from Africa to address the UN General Assembly.

Dar es Salaam.
________________
President’s Samia Suluhu Hassan’s maiden speech at the United Nations General Assembly (Unga), has been mentioned among the seven most important during the session.

President Samia Suluhu Hassan’s speech has been selected by American website ‘Foreign Policy (FP)’ among the most important addresses at the assembly and the only one from a female head of state.

Samia becomes one of the few female heads of State from Africa to address the UN General Assembly.

In their publication, Foreign Policy asked several of their columnists and contributors to weigh in on the speeches they found most compelling or most concerning.

When President Samia finally took the stage to deliver her speech at the Unga, she presented a distinctive contrast to the endless stream of all-male speakers who had preceded her to the podium on the third day of the General Debate.

In her maiden speech, Samia repeatedly praised multilateralism and the United Nations system. She noted her nation’s dependency on technical and financial support from external sources and admonished that “multilateralism cannot and should not succumb to the virus.”

She decried the COVID-19 vaccine inequality, noting that high and middle-income countries were now giving booster vaccinations while developing countries such as Tanzania had barely inoculated even 2 percent of its population.

“The level of vaccine inequity that we see is appalling.It is truly disheartening to see that most of the countries have inoculated less than 2 per cent of the populace and thus need to seek more vaccines for our people,”

“With the current pace, it is less likely that we will meet the WHO threshold of vaccinating at least 40 percent of people in every country by end of 2021, and at least 70 percent by the first half of 2022,” she said.

President Samia also spoke at length on gender equality, a cause she avidly advocates.

“As the first female president in the history of my country, the burden of expectation to deliver gender equality is heavier on my shoulders. Being passionate about gender equality is not sufficient and as such, my government is reviewing policy and legal frameworks in order to come up with actionable and measurable plans to ensure economic empowerment of women and other aspects pertaining to gender equality and gender parity,” she noted.

President Samia pointedly noted that ‘COVID-19 is threatening to roll back the gains made’ in gender equity and said she plans to implement policies aimed at female economic development and political and social advancement.

She assured the Assembly of Tanzania's commitment to remain a formidable member of the United Nations and a dependable supporter of multilateralism.

Other female presidents
Although most African countries joined the UN in the 1960s soon after they attained independence, with a few joining earlier than that or later, it wasn’t until 2006 that the first African female Head of State, Ellen Johnson Sirleaf of Liberia, addressed the UN General Assembly.

Currently, the 54 African member states of the UN make up to 28 percent of its overall membership. Before 2006, only male heads of State and governments had addressed the General Assembly.

Other African female heads of State that followed were Joyce Hilda Banda of Malawi in 2012, Catherine Samba-Panza of the Central African Republic in 2014, and most recently, Sahle-Work Zewde of Ethiopia in 2019.