[h=1]Zanzibar's ferry disaster could have been prevented[/h]By refusing to invest in an ageing fleet, Tanzania's government risks more tragedies like the sinking of the MV Spice Islander 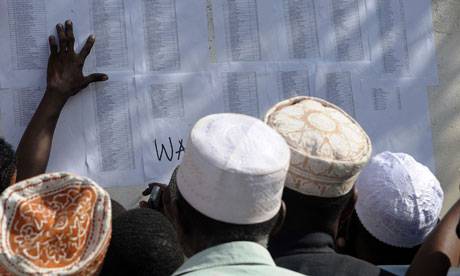 Friends and relatives check a list of names of people admitted to hospital in Zanzibar, following the capsizing of the MV Spice Islander ferry. Photograph: Simon Maina/AFP/Getty Images

This weekend the tiny islands of the Zanzibar archipelago made it on to the news pages of newspapers in the west rather than their usual spot in the travel sections. Early on Saturday morning, the MV Spice Islander, a ferry carrying more than 800 people and provisions bound for the island of Pemba capsized, killing nearly 200 people. But what the headlines failed to mention was that this loss of life could have been avoided if the Tanzanian government had chosen to put the interests of its own citizens before those of visiting tourists.
The Zanzibar archipelago in Tanzania is made up of two islands, Unguja or Zanzibar for tourists  and its poorer, less-visited cousin Pemba, to which the MV Spice Islander was travelling. There are only four or five ferries every week to Pemba, most of them are unreliable.
Last year I took a trip from the isles to the mainland port of Pemba, not on a ferry but on a small dhow (traditional sailboat) to see how people are forced to take these boats on in the absence of regular ferries, even though it is illegal to ferry passengers on them.
At the end of the five-hour trip on the small, overcrowded and overloaded boat on the open sea, my fellow passengers fell on their knees and kissed the planks, thanking the almighty for the uneventful trip. I had not understood the full significance then. Now I do.
For those who do use ferries, like the people who perished at the weekend, the sleek catamarans which take tourists to the islands of Zanzibar are unaffordable. For most, this means taking night-boats, which are cheaper because they are slower than the expensive boats carrying tourists by daylight, and  fatally as it turned out  more prone to overloading.
Among the islanders there is a feeling of inevitability. These outdated ferries, will often break down en route and, while complaints are often made, the government says there are no funds to update the fleet.
In the absence of government investment, private shipping companies running the expensive ferries prefer tourists, who pay around £30, while those on the MV Spice Islander would have had paid around £2 for their journey.
But despite being a poor nation, there are funds available. In August this year, the Tanzanian navy announced it was acquiring expensiveautomatic identification radar systems to reportedly "enhance the fight against illegal fishing and piracy".
When money is at a premium, why not care for the safety of law-abiding citizens first, rather than try to catch criminals?
There have been four marine accidents in the last two years in Tanzania. In 2009, MV Faith capsized near Zanzibar, killing six. The same year, fire engulfed two passenger ships, MV Aziza I and MV Aziza II. These were all cheaper ferries or cargo boats used predominantly by Tanzanians.
The Zanzibar authorities have said they will pay for the funerals of the fellow-islanders who died tragically in the sinking of MV Spice Islander. The question that I hear people constantly asking is whether government funds could have been better used before the tragedy struck.

SOURCE GUARDIN OF UK
You must log in or register to reply here.

Thursday at 1:44 PM
Dumas the terrible