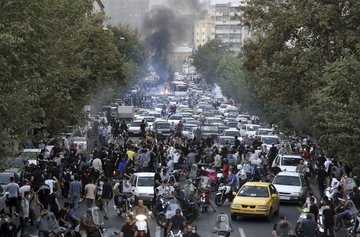 Large protests continued in Iran for the sixth day in a row on Saturday with protestors blocking streets in various cities across the country and reports claiming they had taken control of the city of Oshnavieh.

The protests against the government broke out both online and in the streets last week after Mahsa Amini died in police custody following her arrest by the modesty police who accused her of wearing her hijab wrong.

After news of Amini's death broke, Iranian women took to social media, posting videos of themselves cutting their hair and burning their hijabs, and other videos posted online showed women of all ages in the streets waving their hijabs in defiance.

The protestors, which were made up of both men and women, marched through the streets, shouting out slogans like "death to the dictator" and "live free or die," blocked roads and caused damage to the security forces that tried to stop them.

The Islamic Republic of Iran Broadcasting reported a total casualty count of 35, but the precise number is unclear amid the chaos of the protests.