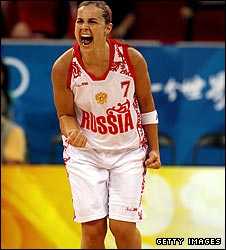 Switching nationality in order to compete at the Olympics has become more noticeable in Beijing than in previous Games and it is beginning to cause concern among international sports bodies. The BBC's Alex Capstick reports.

Becky Hammon failed to make the US women's basketball squad for the Olympics, so she chose another option - to represent Russia.

Athletes change nationalities for a number of reasons - some have ancestry in another country, others simply go for the money.

Hammon's incentive was to play at the Beijing Games.

"This is the door that was open to me," she said. "This is a once in a lifetime opportunity."

"You know I could have gone home and sat in my recliner and watched it on the TV like everybody else, or I could come here and take part.

"So to me the decision, when you put it in those terms, is pretty easy."

Hammon doesn't think she's making a mockery out of the Olympics.

She believes the Games are about bringing the best athletes on the planet together, and it's immaterial where they come from.

But her decision to play for Russia has been described as unfathomable by the US team's coach.

"Well, I think you'll find that if you do your research hundreds of athletes have done this. I guess I am the first one to just draw attention to it.

"America has done it. America has won many medals with athletes that are foreign born."

And the US could win more medals from their foreign legion here in Beijing. 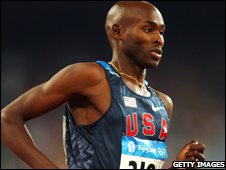 All three of their athletes in the men's 1,500m have switched passports.

Bernard Lagat has won silver and bronze Olympic medals wearing a Kenyan vest. He became a US citizen last year, and he believes it is time to re-pay a debt he owes his adopted country.

"It's a dream that a little boy from Kenya has dreamt about and finally came true, and it didn't happen by myself.

"From the coach who sent me to the United States, from the coach that I got from Washington State, and from the scholarship itself that came from the American taxpayers, American money... I am trying to give back to America what they gave me long before."

Regardless of their motivation, the growing number of athletes changing loyalty has become a concern for the sport's administrators.

If floodgates begin to open then clearly it offends the overall principles...

The International Athletics Federation has made it more difficult for Arab countries to buy up world class runners from Africa.

According to Craig Reedie, a senior member of the IOC, around 25 athletes in Beijing have swapped nationality in the build-up to the Games, and leading officials in the Olympic movement are monitoring the situation.

"If that trend develops, yes, I am sure the IOC would look at it."

"I think [the rules] are about right. I think on balance we would want people to take part in the Games rather than deny them the opportunity.

"If floodgates begin to open, then clearly it offends the overall principles and that, I am certain, we would look at, but I don't think it's quite at that stage yet."

Becky Hammon sang the American national anthem when she lined up for Russia against the USA in a recent tournament.

But there are no split loyalties for the former Kenyan Bernard Lagat.

"When the American national anthem is played I feel enormous pride," he says.

But he says, he felt the same when the Kenyan national anthem was played long: "I was one hundred percent in Kenya."

"My loyalty is for the country that I am representing right now, and that is the United States.

"I don't know about other people, who might have a lot of mixed feelings back in my country, seeing the American flag being raised instead of the Kenyan flag."

Not everyone embraces their new nationality with such enthusiasm.

Most of the East Africans who have accepted a big pay cheque to represent Gulf states still live in the country of their birth.

They have enjoyed considerable financial gain by switching passports.

While the rules allow it, it is hard to blame them for doing it.
You must log in or register to reply here.