[h=1]Kylie Minogue Is Awarded Honorary Doctorate[/h]
Kylie Minogue swapped the glitz and glamour for a gown and cap as she took to the stage in Chelmsford to receive an honorary doctorate.

The singer was made Doctor of Health Science at Anglia Ruskin University for her work promoting breast cancer awareness following her own successful battle with the disease.
After the ceremony, she told Sky News the doctorate was "a massive honour".
She said: "I supported breast cancer awareness groups before my diagnosis and obviously afterwards it becomes that much more important to me to share."

Kylie receiving her doctorate at the ceremony
She added: "Science and medicine is this mysterious thing until you are directly dependent upon it and I have a keen interest.
"I have become friends with some of my professors and doctors so I like to know what they are working on."
Kylie was diagnosed in 2005 and went through surgery and chemotherapy before she was given the all clear the following year.
Since then she has been busy, not just as a singer, but working with the charity Breakthrough Breast Cancer.

The singer beat breast cancer and now campaigns for greater awareness
The decision was made to honour the performer because of the university's work in breast cancer research.
"We just felt that Kylie's very open support for breast cancer awareness hit a real chord with us and would be an inspiration to those workers in that research lab and also patients receiving treatment," said pro vice-chancellor Sandra Hollis.
Kylie received her award alongside 220 graduates, most of whom were stunned to see her there.
The singer, 43, has sold more than 68m records worldwide and will celebrate 25 years in the music business next year.
But she admits her biggest achievement has been beating breast cancer and it is a cause she plans to keep fighting for.


There are currently no comments for this story. Be the first to comment below, and let us know what you are thinking. 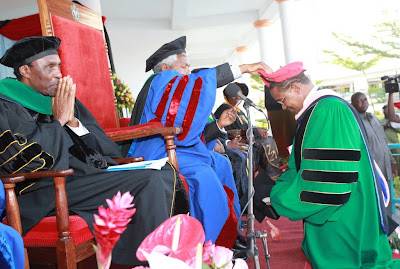 Jakaya shame on you, this was underselvely applauds ...

Du! Mi napita tu
You must log in or register to reply here.