E-mail this to a friend Printable version 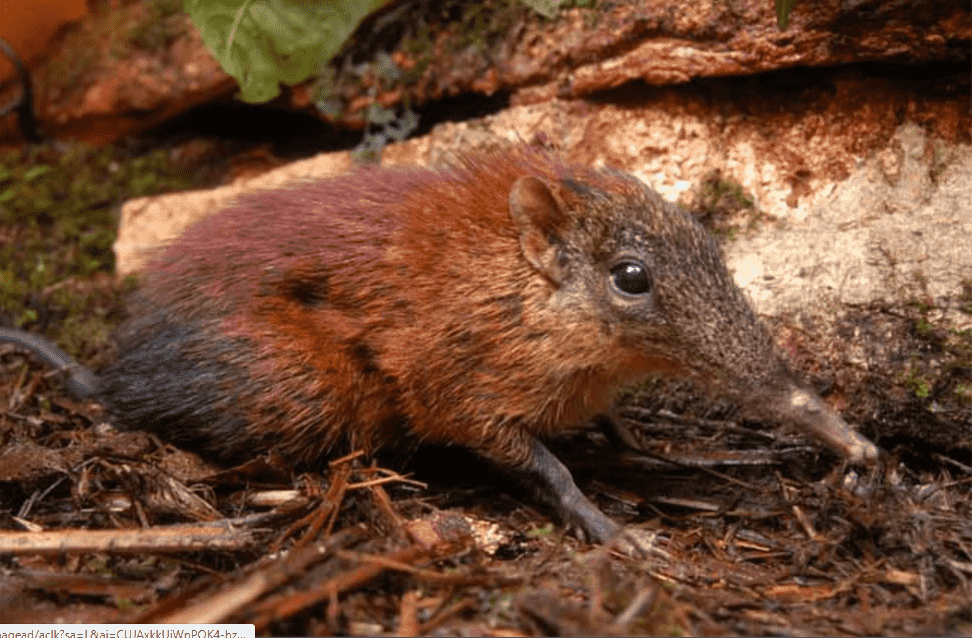 The curious-looking creature was caught on camera

A new species of mammal has been discovered in the mountains of Tanzania, scientists report.

The bizarre-looking creature, dubbed Rhynochocyon udzungwensis, is a type of giant elephant shrew, or sengi.

The cat-sized animal, which is reported in the Journal of Zoology, looks like a cross between a miniature antelope and a small anteater.

It has a grey face, a long, flexible snout, a bulky, amber body, a jet-black rump and it stands on spindly legs.

"This is one of the most exciting discoveries of my career," said Galen Rathbun, from the California Academy of Sciences, who helped to confirm the animal was new to science along with an international team of colleagues.

They are so bizarre-looking and a lot of their behavioural ecology is so unique and interesting, you kind of get wrapped up with them

Despite its name, the creature, along with the 15 other known species of elephant shrew, is not actually related to shrews.

Dr Rathbun told the BBC News website: "Elephant shrews are only found in Africa. They were originally described as shrews because they superficially resembled shrews in Europe and in America."

In fact, the creature is more closely related to a group of African mammals, which includes elephants, sea cows, aardvarks and hyraxes, having shared a common ancestor with them about 100 million years ago.

"This is why they are also known as sengis," explained Dr Rathbun.

The new species was first caught on film in 2005 in Ndundulu Forest in Tanzania's Udzungwa Mountains by a camera trap set by Francesco Rovero, from the Trento Museum of Natural Sciences in Italy.

Dr Rathbun said: "I got these images, and said to myself: 'Boy, these look strange'. But you can't describe something new based just on photographs, so in March 2006, we went back in and collected some specimens."

He told the BBC that it quickly became apparent that the creatures were new to science.

He said: "Elephant shrews are almost all distinguished by distinctive colour patterns, and this is especially true of the forest-dwelling giant sengis.


The animal uses its long snout for scooping up insects

"They are all quite flashy - one species has a bright golden rump, another checkers along the rump - so when you have a colour pattern that just isn't similar to what is out there, you know it is fairly obvious that you have got something new.

"And this one, with its grey face and black rump, was pretty different."

As well as its distinctive colouring, the new species is also larger than other species of giant elephant shrew, weighing 700g (25oz) and measuring about 30cm (12in) in length.

It uses its long, flexible nose and tongue to flick up insects, such as termites, and it is most active in daylight.

Dr Rathbun added: "They are behaviourally fairly simple - they are not like a dog or cat you can interact with - but they are so bizarre-looking and a lot of their behavioural ecology is so unique and interesting, you kind of get wrapped up with them."

The scientists say there is still much to learn about the Rhynochocyon udzungwensis, but they hope further research will help to answer questions about how many of the animals exist, their range and how closely the animals live together.

Tanzania's Udzungwa Mountains are biodiverse-rich. In addition to this new species, a number of other new animals have been found there, including the Udzungwa partridge, the Phillips' Congo shrew, and a new genus of monkey known as Kipunji as well as several reptiles and amphibians.

Dr Rathbun said it was vital the area and its inhabitants in this biodiversity "hotspot" were protected.
Click to expand...

E-mail this to a friend Printable version

maana wangekuwa dili kama meno ya tembo wangebaki historia tu...
You must log in or register to reply here.