Labor wins in Australia a big blow to J. Howard party who lost even his Sidney seat. More to come.
N

Labor wins in Australia a big blow to J. Howard party who lost even his sidney seat. More to come.
Click to expand... 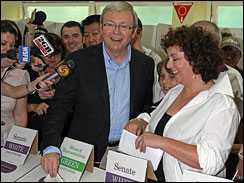 The win handed a humiliating end to the career of outgoing Prime Minister John Howard, who became Australia's second-longest serving leader - and who had appeared almost unassailable as little as a year ago. In a potential addition of insult to injury, Howard was among government lawmakers in danger of losing his seat in Parliament. He would be only the second sitting prime minister in 106 years of federal government to be dumped from the legislature.

Official figures from the Australian Electoral Commission showed Labor far in front with more than 60 percent of the ballots counted. Using those figures, an Australian Broadcasting Corp. analysis showed that Labor would get at least 81 places in the 150-seat lower house of Parliament - a clear majority.

Howard was expected to formally concede defeat within hours, before Rudd would formally claim victory. The change in government also marks a generational shift for Australia.

Rudd, a 50-year-old former diplomat who speaks fluent Chinese, urged voters to support him because Howard was out of touch with modern Australia and ill-equipped to deal with new-age issues such as climate change.

Howard campaigned on his economic management, arguing that his government was mostly responsible for 17 years of unbroken growth, fueled by China's and India's hunger for Australia's coal and other minerals, and that Rudd could not be trusted to maintain prosperous times. A new government is unlikely to mean a change in Australia's foreign relations, including with the United States - it's most important security partner - or with Asia, which is increasingly important for the economy.

One of the biggest changes will be in Australia's approach to climate change. Rudd has nominated the issue as his top priority, and promises to immediately sign the Kyoto Protocol on greenhouse gas emissions. When he does so, the United States will stand alone as the only industrialized country not to have signed the pact.

At home, Rudd has pledged to govern as an "economic conservative," while pouring money into schools and universities. He will curtail sweeping industrial reforms laws that were perceived to hand too much power to bosses, turning many working voters against Howard.

Labor has been out of power for more than a decade, and few in Rudd's team - including him - has any government experience at federal level. His team includes a former rock star - Midnight Oil singer Peter Garrett - and a swag of former union officials.

Howard's four straight election victories since 1996 made him one of Australia's most successful politicians. But his refusal to stand down before this election - even after being urged to do by some party colleagues - mean his legacy will be tarnished by the hubris of staying too long.

Mark Apthorpe, a 24-year-old information technology worker who lives in Howard's district of Bennelong, voted for Rudd even though he was happy with the way the economy was being managed.

Like many voters, he said it was time for a change. "Johnnie's said a few things that he has gone back on," Apthorpe said of Howard. "He's been around a long time, and he'll be gone in 18 months anyway."

Howard earlier this year announced plans to retire within about two years if he won the election, sparking claims of arrogance.
Click to expand...