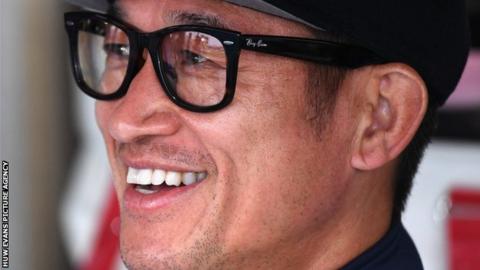 "I was able to renew my contract with Yokohama FC in the 2020 season," the player nicknamed "King Kazu" told the club's website.

"I will do my best to contribute."
Just for some perspective, Miura featured in the original Fifa 96 game. There are rumours he'll also feature in Fifa 21.

No such show of faith from the people at Football Manager, though. They removed him from the game at 40. Come on, where's the optimism, guys?

Kazuyoshi Miura in action for Verdy Kawasaki in 1994​
Miura's club, Yokohama FC, have just secured promotion to the top tier. Admittedly, the veteran's involvement during the campaign was limited to three appearances (without a goal).

Yokohama FC's first game in the division, on 23 February, will be away to Vissel Kobe, for whom one Andres Iniesta - the Spain and Barcelona great - plays.

This will be the first time Miura has played in the top division since 2007, when he was 40. Think about that. What were you doing in 2007? SATs?

Miura pictured playing against Brazil, the country in which he started his professional football career, in 1995​
He retired from international football 20 years ago, after winning 89 caps for Japan.

Miura was also born in the same month as Italy legend Roberto Baggio, who retired in 2004. In 2017, he broke former Stoke, Blackpool and England player Sir Stanley Matthews' record as the oldest professional to score a goal.

After being excluded from Japanese squad, ahead of World Cup 1998​
His 30-plus-year career has included stints in Brazil, Italy and Croatia.

Older than the head coach

Started playing before most of his teammates were born

35th season as a professional football