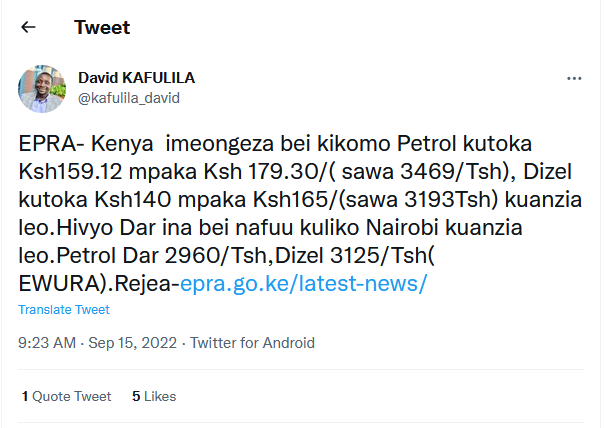 Tanzania has the lowest fuel prices in the region​ 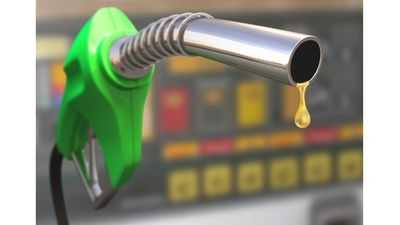 Fuel prices could be high in Tanzania yet they are the second lowest in the region after the Democratic Republic of Congo (DRC), thanks to a subsidy system.

The Samia Suluhu Hassan administration is injecting at least Sh100 billion each month on fuel subsidies, which have had a significant impact on relieving Tanzanians of high global fuel prices.

In line with the subsidy programme, Dar es Salaam residents are now paying Sh2,969 on every litre of petrol instead of Sh3,049 while diesel costs Sh3,125 instead of Sh3,359.

On average, the globalpetrolprices.com, which tracks the retail prices of motor fuel, electricity and natural gas in over 150 countries, states that Tanzanians are currently paying $1.309 (about Sh 3,010.7) for a litre of gasoline (petrol).

In Kenya, where prices rose to a record high yesterday after President William Ruto’s government slashed subsidies, a litre of petrol is now fetching Ksh179.30 (about Tsh3,580) while diesel and kerosene prices are up by Tsh400 and Tsh500 respectively, the Energy and Petroleum Regulatory Authority (EPRA) said.

The new price regime that will remain in force until October 14 was announced shortly after the new President took office on Tuesday, vowing to scrap food and fuel subsidies.

On Tuesday, President Ruto vowed to withdraw the fuel subsidy that has kept prices stable since July.

At his inauguration, the President said he will do away with subsidies on fuel and food, arguing that they are a huge burden to the exchequer and often lead to product shortages.

According to globalpetrolprices.com, among the member states of the East African Community (EAC), Ugandans are paying the highest amount in petrol where a litre costs $1.728 (about Tsh3974.4 and Ush6,590).

DRC has the lowest price at $1.224 (about Tsh2,815.2).
South Sudan is the only country among the member states of the EAC that is not covered by the globalpetrolprices.com.

Analysts are of the view that while subsidies have been helpful in saving Tanzanians from the wrath of rising global fuel prices, the government should now come up with a lasting solution.

For his part, a business and economic analyst David Kafulila, said the future of stable fuel prices in Tanzania was in the establishment of a strategic fuel reserve and in systematic implementation of the energy-mix policy.

“We can establish a strategic fuel reserve that can also serve as a price stability mechanism in just the same way as we do in cereals,” he said.

In partnership with the private sector, he said, a strategic reserve could see Tanzania, which has several seaports, serving other land-locked countries within the region.

As for the energy mix aspect, Mr Kafulila was of the view that after doing a commendable job in reducing Tanzania’s dependency on water and fuel in power generation by investing in gas-powered generators, it was high time the country went big on utilisation of the resource [natural gas] in order to serve other aspects too.

“The more we diversify on energy sources by dwelling on available options the more we reduce dependency on imported fuel and skip global oil price uncertainties due to volatility nature of it,” he said.

A few days ago, OPEC+ (which includes OPEC and allied oil-producing nations like Russia) announced that it would slash oil production targets for October by 100,000 barrels per day.

This is an indication that Opec+ was determined to defend a price level of around $100 a barrel.

“We are not yet out of the woods. These volatilities may reverse the downward trends of global prices that we have seen starting this month and the previous month,” Mr Mgaya told The Citizen last Tuesday.

Like Mr Kafulila, he said it was about time the country developed and monetised its natural gas.

But in the meantime, he said the government should continue supporting the end consumers by subsidising fuel prices.

“Again, the oil marketers should be supported by ensuring that law and regulations pertaining to pricing are respected to protect their investments and losses that they have incurred in the past or will incur in future are compensated,” asserted Mr Mgaya.

An economist from the University of Dar es Salaam, Dr Abel Kinyondo, said if the Opec+ would cut oil output and Russia stop critical gas supply to Europe, demand for fuel could surge.

“As a matter of fact, Tanzania should expect an upward pressure that will eventually lead to an increase in prices of everything,” stressed Dr Kinyondo.

Meanwhile, he expressed the need for a mid and long term plan to develop a fuel reserve, which would be used during difficult times and part of which sold to land locked countries.

In a bid to address fuel price hike, Energy minister January Makamba is on record as saying the government was planning to establish national strategic petroleum reserves and a petroleum hub.