This man used to write good articles in Mwananchi especially kandiaring mafisadi. Where is he?? Amepotelea wapi na vita ya ufisadi?

Shapu said:
This man used to write good articles in Mwananchi especially kandiaring mafisadi. Where is he?? Amepotelea wapi na vita ya ufisadi?
Click to expand...

He is kandiaring them now in RAI

Burn said:
He is kandiaring them now in RAI
Click to expand...


Mhh. Burn,
You cant be serious!! So he has JOINED them!!

After Mbeki's Xenophobia, will Kikwete be next 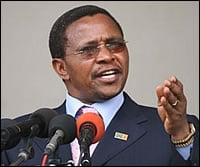 Jakaya Kikwete has spent about a quarter of his time as president outside the country Jean Blondel in Comparative Government argues that politics vary from one country to another. That is to say that issues which are relevant in one country may be irrelevant to the other. But still, there are issues that are common in many countries. One of them is the travelling behavior of President Thabo Mbeki of South Africa and his counterpart, President Jakaya Kikwete of Tanzania, who also is Chairman of the African Union.These two Presidents love travelling abroad, engaging in international matters and paying little attention to their local responsibilities.

While the Xenophobia saga still rages, Mbeki jetted to Japan- the second visit outside the country in a period of two weeks. At first he went to Arusha for the AU summit leaving his subjects writing a new history. This time, race wasn't the big issue but a total selfishness from South African Blacks who decided to forget the liberation movement's history! Yes they killed their fellow comrades from other African countries with impunity while their Commander in Chief remained mum only to talk after over 50 people had given their permanent residence permit to heaven! This is typical Mbeki who has not only created a mess in Zimbabwe through his "Silence Diplomacy" but has failed the very citizens who voted him in power en masse.

My dreams about South Africa were shattered when I arrived in Cape Town and found that apartheid still reigns. Africans still live in poor settlements known as &#8216;Sharks' while their fellow Whites enjoy life in well planned settlements. John Williams in his article Community Participation: Lessons from Post-apartheid South Africa reveals issues such as high level of disunity among communities and historical negative attitude between blacks and Whites that still exist today!
Whereas top positions in many governmental organizations in South Africa are headed by blacks, most of the operations or decision-making positions are still controlled by the Whites. ESKOM a South African Power company for instance allegedly gives more attention to White settlement areas but forgets the marginalized blacks. Actually, the level of poverty for marginalized blacks is increasing today and issues such as the global rise in gas price, food shortage and the power crisis within South Africa negatively impacts the marginalized blacks.

African countries need statesmen who will help provide sustainable answers to problems facing their countries before becoming problem solvers for international problems! Mbeki seems to have forgotten this! Could he be doing this because he is counting his last days in office? Do his international trips provide tangible returns to the average South African who voted for him?

Jakaya Kikwete has aped him. Despite the fact that he is about to mark his third year in office, he has spent about a quarter of his time as president outside the country! He reminds me of US president George Bush who used to spent much time in his ranch in Texas (he must have dreamt of controlling Washington from his ranch) until September 11 2001 proved him wrong &#8211;sending him back to the capital city. As Tanzania gets credit for solving other peoples' problems, it is still one of the poorest countries on earth!

The current xenophobic attacks in South Africa have disclosed a hidden feeling that many Africans harbour but fear to publicize. Why did about 80% of Tanzanians vote against the rush to join the East African Political Federation? Don't they claim that Kenyans and Ugandans are their brothers and sisters? The only answer surrounding this fear is underdevelopment! Most Tanzanians claim that Kenyans are grabbing their jobs. Here in South Africa, the claim is the same. Last year I heard the same story in the US whereby Mexicans were getting the blame! But if we are not developing our countries, who will do it for us? Have we forgotten that "charity begins at home?" Why is President Kikwete learning from Mbeki who has created an unmanageable South Africa ridden with crime and deteriorating in economy?

Is he going to wait until things become worse or begin from now to control his government from a lot of corruption scandals, mistrust from the public and low level of economy for poor Tanzanians?

But you are the one, aren't you?! Unajitafuta mkuu??

Kitila Mkumbo said:
But you are the one, aren't you?! Unajitafuta mkuu??
Click to expand...

You can read all his pieces from this link:

Kitila Mkumbo said:
But you are the one, aren't you?! Unajitafuta mkuu??
Click to expand...