Ivory Coast Elections: Who is the Winner?

The Ivorian military has sealed the country's borders and cut international media as tensions rise over the outcome of the presidential election run-off.

It comes after the Constitutional Court rejected a declaration by the electoral commission that opposition candidate Alassane Ouattara had won.

Supporters of President Laurent Gbagbo had tried to block the long-delayed result, alleging fraud in the north.

The UN Security Council asked both sides to show restraint.

"The air, land and sea border of the country are closed to all movement of people and goods," Ivorian military spokesman Babri Gohourou said.

Shortly after, the military announced "the immediate suspension of all foreign news channels" in the country, including CNN, France24 and Radio France International FM.

The announcement of the result of Sunday's run-off had been much delayed, leading to heightened tension in the country.

Supporters of President Ggagbo had tried to block the result, saying there had been fraud in the north, the region where Mr Ouattara is most popular.

The north is also controlled by former rebels.

The head of the independent electoral commission (IEC) , Youssouf Bakayoko, said Mr Ouattara had won 54% of the vote, compared to 46% for Mr Gbagbo.

He was speaking under armed guard at a hotel, rather than from the commission's headquarters.

At about the same time, the head of the Constitutional Council, Paul Yao N'Dre, who is seen as being close to Mr Gbagbo, said it was taking over the declaration from the election commission.

"Because of disagreements on the results of some regions, the independent electoral commission wasn't able to give the provisional results," Mr N'Dre said.

The election was intended to reunify the world's largest cocoa producer which split in two after a civil war in 2002.

But the BBC's John James in Abidjan says there will now be a tug of war between the two bodies with the outcome unclear.

After a closed-door meeting, the members of the UN Security Council appealed to both sides to solve their difficulties peacefully.
The council members "reiterated their readiness to take the appropriate measures against those who obstruct the electoral process and, especially, the work of the IEC," the US ambassador to the UN, Susan Rice, said after the meeting.

French President Nicolas Sarkozy hasd urged the constitutional council to "respect the will clearly expressed by the Ivorian people", while the US White House said that "no party should be allowed to obstruct further the electoral process".

The International Criminal Court said it would be monitoring acts of violence.

Both the army and UN peacekeepers have been patrolling Abidjan's streets since Sunday to prevent an outbreak of violence.

African politics as always! Elections are chaos instead of peace enhancement. Most of politicians in africa are toxic and have only one agenda to appeal and further for, that is personal grudges. No one should come accross the incumbents' eminence.
You dare do that, you are condemned to vilain! Oh poor africa! 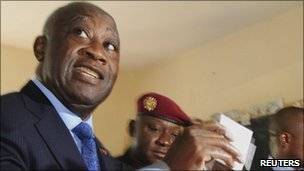 Ivory Coast's Constitutional Council has overturned earlier poll results and declared President Laurent Gbagbo the winner of Sunday's run-off.
On Thursday the electoral commission head said opposition candidate Alassane Ouattara had defeated Mr Gbagbo.
But the Constitutional Council chairman said results in seven regions in the north, where Mr Ouattara draws most of his support, had been annulled.
The poll was intended to reunify the nation after a civil war in 2002.
Paul Yao N'Dre, chairman of the Constitutional Council which validates election results, said Mr Gbagbo had won a little more than 51% of the vote.
The head of the electoral commission had said Mr Gbagbo won 46% of ballots cast.
'Deeply concerned' On Thursday evening, the military closed the country's borders and international news sources were suspended.
Earlier, the UN mission in Ivory Coast had urged the rivals to keep their poll pledges and not resort to violence.
The African Union said it was "deeply concerned" by the developments in the world's largest producer of cocoa, Reuters news agency reported.
Both the army and UN peacekeepers have been patrolling the streets in the main city, Abidjan, since Sunday to prevent an outbreak of violence.
At least four people have been killed in election-related clashes in Abidjan this week.