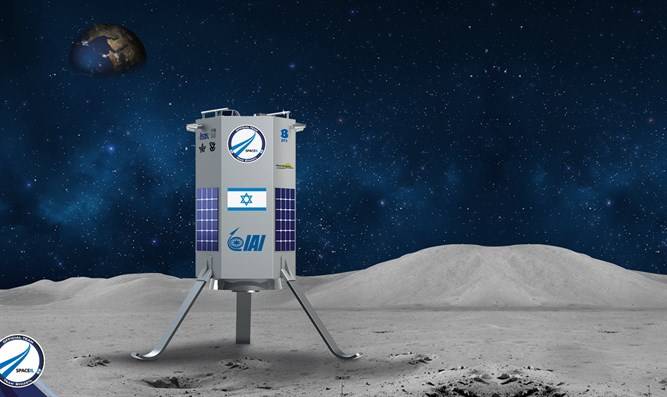 An Israeli spacecraft aboard a SpaceX rocket has launched from Cape Canaveral in Florida, beginning a two-month journey to land on the Moon.
If successful, Israel, a state with fewer than 9 million citizens, will join Russia, the US and China as the only countries to have made a controlled landing on the surface of earth’s nearest neighbour.
Funded almost entirely by donations, the project is also the first privately backed lunar lander mission.
About the size of a washing machine, the 585kg (1,290lb) robotic lander named Beresheet, the Hebrew word for Genesis, took off at 8.45pm on Thursday local time. It was placed on top a Falcon 9 rocket, one of SpaceX’s private fleets run by the billionaire entrepreneur Elon Musk.
We thought it’s about time for a change, and we want to get little Israel all the way to the moon,” said Yonatan Winetraub, co-founder of SpaceIL, the nonprofit organisation behind the effort.
“We’ll keep analyzing the data, but bottom line is we entered the very exclusive group of countries that have launched a spacecraft to the moon,” said Yigal Harel, head of SpaceIL’s spacecraft program.
The Israeli prime minister, Benjamin Netanyahu, watched the launch from the control centre in Yehud, Israel.
“This is a very proud moment,” Netanyahu’s office quoted him as saying. “While this is a great step for Israel, it is a huge step for Israeli technology.”
Apollo 11’s Buzz Aldrin congratulated the team on their journey “to my old stomping ground ... the moon”.
Crewed lunar trips have taken around three days, but the probe will take a circuitous route.
Beresheet was jettisoned into Earth orbit 34 minutes after blasting off and successfully deployed its landing legs. However, it will not use them for some time – the lander will speed in ever-widening elliptical orbits around the Earth until it intercepts the moon’s gravitational pull in several weeks. Its creators have estimated it will land on 11 April after a 4m-mile (6.5m-km) journey.
Following an automated touchdown, the four-legged craft will photograph its landing site – a dark spot in a lunar plain called the Sea of Serenity – and measure magnetic fields. It will only be operational for about two days, before shutting down.
Its frame houses a time capsule of digital files the size of coins containing the Bible, children’s drawings, Israel’s national anthem and blue and white flag, as well as memories of a Holocaust survivor.
Built by SpaceIL in partnership with the state-owned Israel Aerospace Industries (IAI), Beresheet cost about £70m, a fraction of the cost of missions led by the Russian, US, and Chinese governments.
Morris Kahn, a South African-born Israeli billionaire, is the main backer but the US Republican party and pro-Israel funder Miriam Adelson and her casino-owning husband, Sheldon, also gave $24m.
US and European space agencies intend to use an expanding private space industry to send people back to the moon. The administrator of Nasa, Jim Bridenstine, called the Beresheet mission “a historic step for all nations and commercial space as we look to extend our collaborations”.
Beresheet was launched alongside two other payloads – a telecommunications satellite for Indonesia and an experimental satellite for the US air force.
SpaceX says the rocket will be reused, after the main-stage booster separated and flew back to earth, landing safely on a drone ship in the Atlantic ocean. 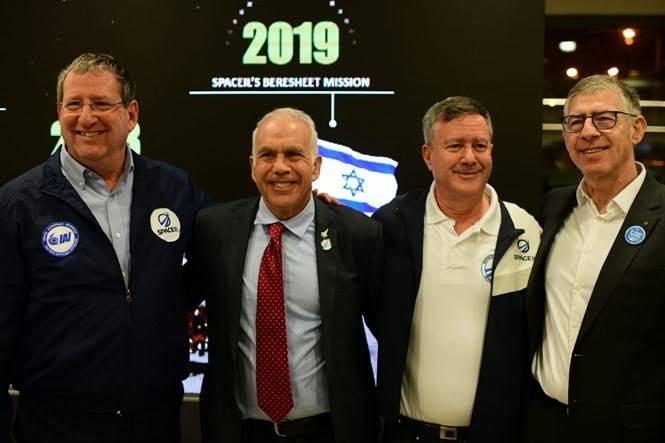 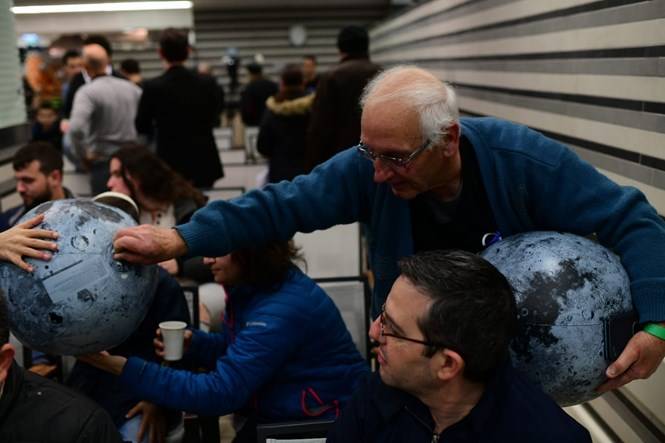 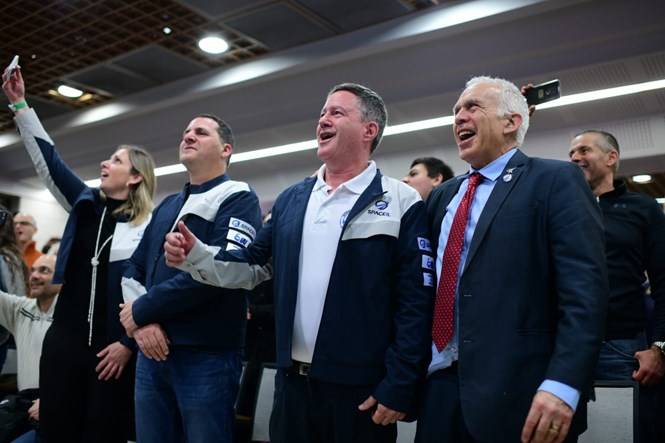 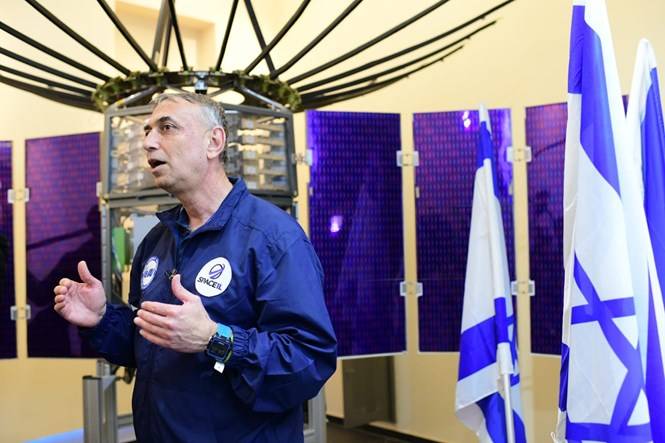 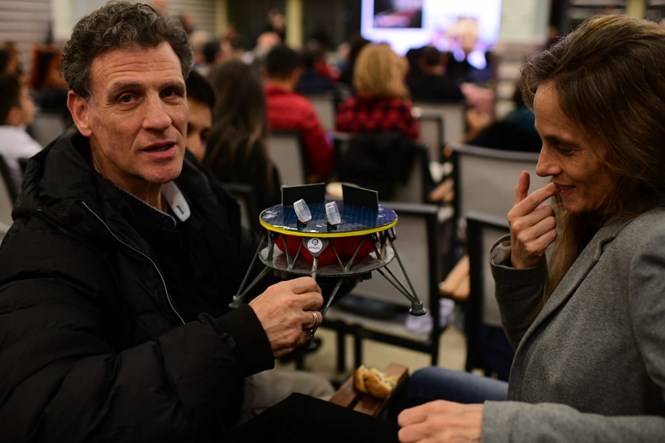 Israeli spacecraft to be launched from Cape Canaveral Thursday night, bound for the Moon in Israel's first lunar landing mission.

A rocket will take off from Cape Canaveral in Florida on Thursday night carrying Israel's Beresheet spacecraft, which aims to make history twice: as the first private-sector landing on the Moon, and the first from the Jewish state.

The 585-kilogram (1,290-pound) Beresheet, which means "Genesis" in Hebrew, is to lift off at 8:45 pm (1:45 a.m. GMT Friday) atop a Falcon 9 rocket from the private US-based SpaceX company of flamboyant entrepreneur Elon Musk.

The Israeli craft will be placed in Earth orbit, then begin a seven-week trip under its own power to reach the Moon and touch down on April 11 in a large plain.
The unmanned mission is part of renewed global interest in the Moon, sometimes called the "eighth continent" of the Earth, and comes 50 years after American astronauts first walked on the lunar surface.
"For the future of our children, the State of Israel and for the belief that anything is possible, join us and wish Beresheet luck on its way to the Moon!" said a collective message from SpaceIL, the non-profit organization that designed the Israeli craft.
Entrepreneurs, not government space agencies, financed the mission, initially as a potential entry in the Google Lunar XPRIZE contest.

That competition planned to award $30 million to encourage scientists and entrepreneurs to offer relatively inexpensive lunar missions. The contest closed without a winner in March 2018 but the SpaceIL team continued its mission and purchased a spot on a SpaceX rocket.
Other partners are Israel Aerospace Industries (IAI), Israel's space agency, and the country's Ministry of Science and Technology.

So far, only Russia, the United States and China have made the 384,000-kilometer (239,000-mile) journey and landed spacecraft on the Moon.

China's Chang'e-4 made the first-ever soft landing on the far side of the Moon on January 3, after a probe sent by Beijing made a Lunar landing elsewhere in 2013.

Americans are the only ones to have walked on the lunar surface, but have not been there since 1972.
For Israel, the landing itself is the main mission, but the spacecraft also carries a scientific instrument to measure the lunar magnetic field, which will help understanding of the Moon's formation.

Technically, it is far from a trivial mission.
After its initial boost from the Falcon 9, the Beresheet's British engine will have to make several ignitions to place the spacecraft on the correct trajectory to the Moon.

When it arrives, its landing gear must cushion the descent onto the lunar surface to prevent Beresheet from crashing.

At a cost of $100 million, "this is the lowest-budget spacecraft to ever undertake such a mission. The superpowers who managed to land a spacecraft on the Moon have spent hundreds of millions of dollars in government funding," IAI said in an earlier statement.

"Beresheet is the first spacecraft to land on the Moon as a result of a private initiative, rather than a government."

After China earlier this year, and now Israel, India hopes to become the fifth lunar country in the spring with its Chandrayaan-2 mission. It aims to put a craft with a rover onto the Moon's surface to collect data.

Japan plans to send a small lunar lander, called SLIM, to study a volcanic area around 2020-2021.
As for the Americans, a return to the Moon is now the official policy of NASA, according to guidelines issued by President Donald Trump in 2017.
"This time, when we go to the Moon, we're actually going to stay," NASA Administrator Jim Bridenstine said last week.

To achieve this, the US space agency is changing its model and no longer wants to design the missions itself.

The National Aeronautics and Space Administration, which has installed equipment on Beresheet to upload its signals from the Moon, said last week it aims to land instruments later this year or next year and that it is inviting private sector bids to build and launch the US probes.

The US space agency plans to build a small space station, dubbed Gateway, in the Moon's orbit by 2026, and envisages a manned mission to Mars in the following decade.
Click to expand...