Ukraine has been vocal about the purported use of Iranian drones, and the EU is considering sanctions on Tehran.

Tehran, Iran – The Iranian government says it is ready to talk to Ukrainian officials to address allegations that it is arming Russia and plans to ramp up military cooperation with it, as the war in Ukraine nears the end of its eighth month.

In a statement issued late on Tuesday, Iranian foreign ministry spokesman Nasser Kanani reiterated Tehran’s denials about sending drones to Russia to be used in the conflict, and for the first time expressed readiness for “dialogue and negotiation with Ukraine to clear these allegations”.

It came after Ukrainian Foreign Minister Dmytro Kuleba said on Monday he had proposed to President Volodymyr Zelenksyy the formal breaking of diplomatic ties with Iran after Russia’s latest attacks, which killed several people and damaged infrastructure.

Kuleba said the Ukrainian government had no doubts that Iranian Shahed-136 “kamikaze” drones were used in Monday’s attacks, and believed Tehran would possibly continue supplying arms to Moscow.

Separately, The New York Times on Tuesday cited unnamed US officials as saying that Iran, after selling drones to Russia, had sent trainers from the Islamic Revolutionary Guard Corps (IRGC) to the Russian-annexed Crimea Peninsula to help Russian forces operate them. It followed reports by other Western media that Tehran was preparing to send more drones, in addition to transferring short and medium-range surface-to-surface Fateh and Zolfaghar missiles.

In a speech on Wednesday, Iran’s Supreme Leader Ayatollah Ali Khamenei appeared to reference the alleged drone sales to Russia.

“When photos of our advanced missile and drone equipment were published a few years ago, [our enemies] said they are photoshopped. Now they say that Iranian drones are very dangerous and ask why do you sell them,” he said, without directly mentioning the war in Ukraine.

Ukraine accuses Russia of using the Shahed-136, albeit re-branded as Geran-2 with its own tail numbers.

The relatively cheap and fairly accurate drone is able to fly long distances before crashing into its targets with built-in explosives.

Ukraine, which downgraded diplomatic ties with Tehran last month, has been vocal about the purported use of the Iranian drones, with Zelenskyy and his top officials directly blaming them several times for attacks on the capital Kyiv and elsewhere.

eral of the drones.

The Kremlin on Tuesday said that Russian technology with Russian names was “being used” in Ukraine, and referred questions to the defence ministry.

On Monday, Ukraine called on the European Union to impose sanctions on Iran for the alleged arms sales, with Kuleba saying he was prepared to offer evidence. The bloc’s foreign ministers did not take action during a meeting in Luxembourg, but foreign policy chief Josep Borrell said the EU was reviewing evidence at its disposal and would impose new sanctions if it could independently verify arms sales to Russia for the war.

The bloc, however, imposed sanctions on a slew of Iranian officials and entities for what it called “the brutal repression of protests” that erupted across Iran a month ago following the death of 22-year-old Mahsa Amini in the custody of the country’s so-called “morality police”.

While repeatedly denying any arms sales to Moscow for the purpose of being used in Ukraine, Iranian officials have said the country has active “defence cooperation” with Russia, without elaborating.

Iran and Russia are growing increasingly closer, with Iranian foreign minister Hossein Amirabdollahian saying on Tuesday a long-term cooperation agreement that has been in the works since last year will be finalised by the end of the current Iranian calendar year in March 2023. 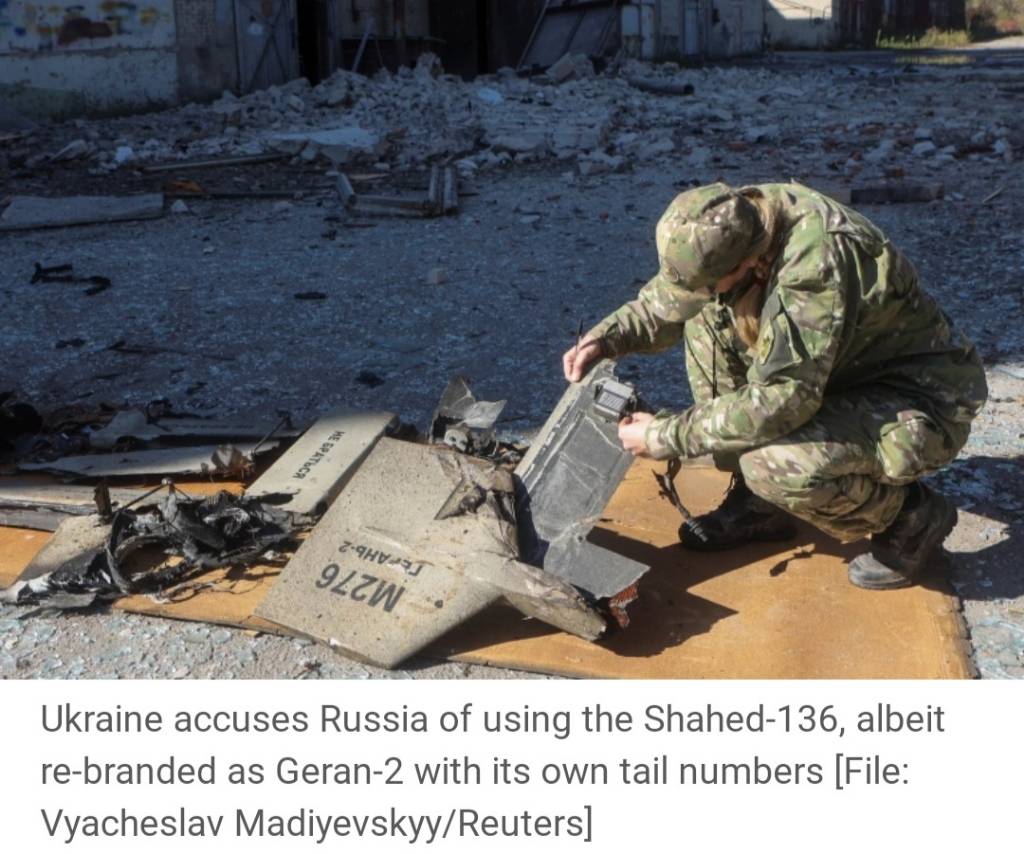 Ukraine war: Who is winning?​ 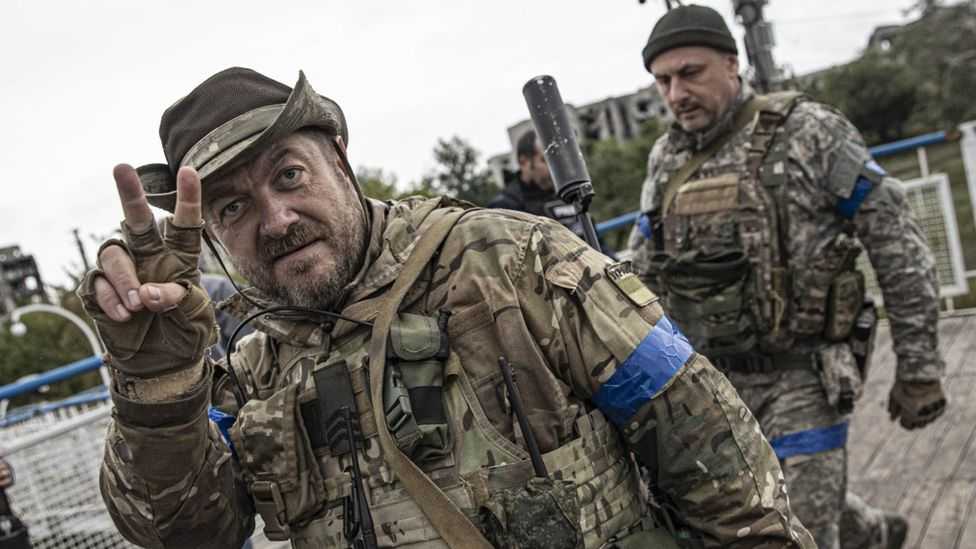 IMAGE SOURCE,GETTY IMAGES
Ukrainian forces have made rapid gains in recent days and have recaptured territory in the Russian-occupied Luhansk region of eastern Ukraine.
However, Russian forces still hold about a fifth of the country.


How has the conflict changed?​

Russia invaded Ukraine on 24 February, surrounding the Ukrainian capital Kyiv. It also launched attacks in the south, east and north of the country.
In early April, Ukrainian forces retook large areas around Kyiv, after Russia abandoned its push towards the capital.
Russia has since been focusing its military operations in the south, east and north-east of Ukraine, seizing large areas.
However, things changed dramatically at the start of September.
In a decisive offensive in the north-east, Ukraine drove back Russian forces. It claims to have regained 3,000 square kilometres (1,158 sq miles) of territory around the city of Kharkiv alone.
Its forces have also retaken territory in Luhansk, in eastern Ukraine. Since July, the region had been entirely occupied by Russia.
In total, Ukraine says it has retaken more than 8,000 sq km (3,088 sq miles) from Russian control in September - its most significant territorial gains since the war started. 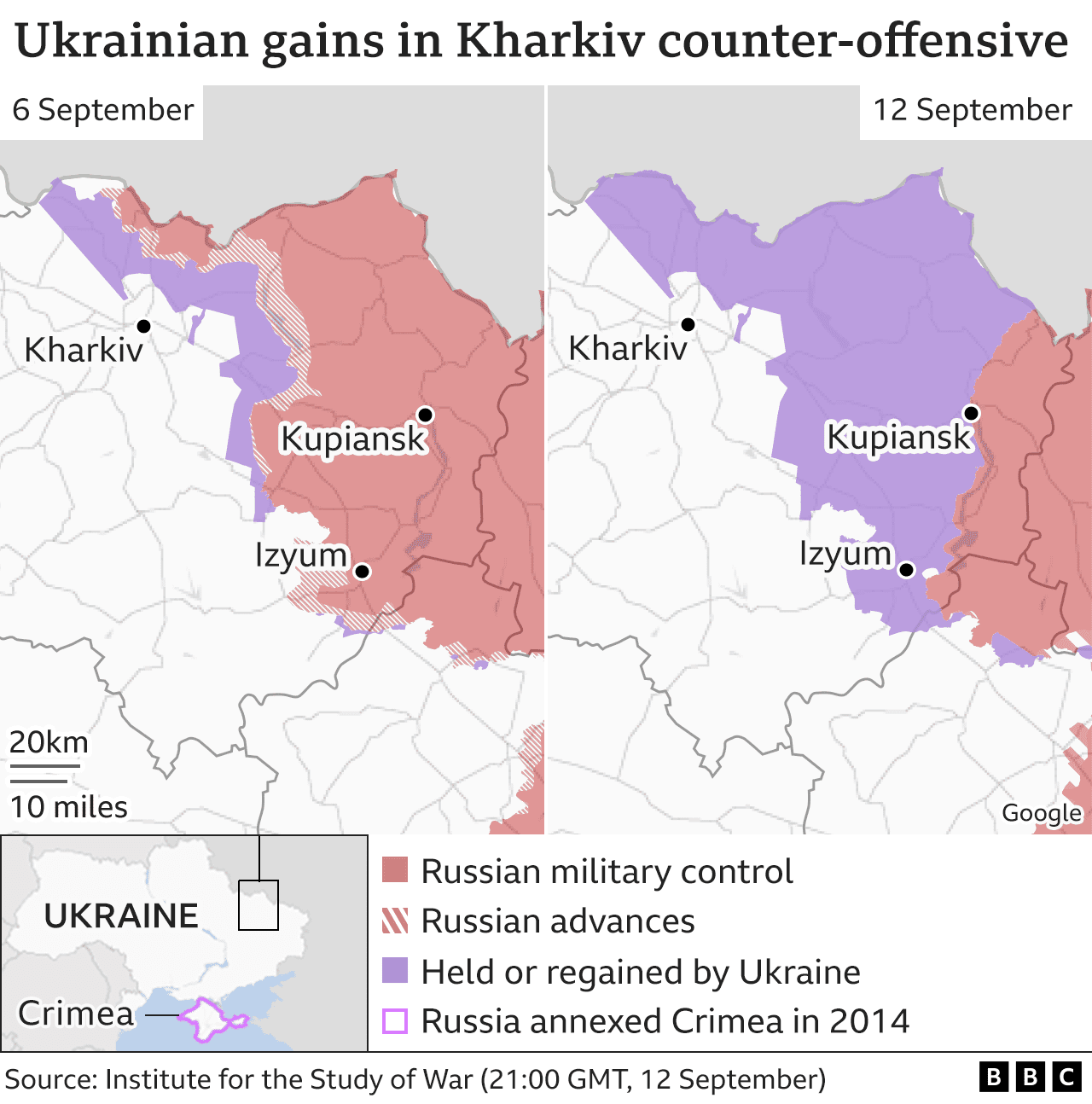 The cities of Izyum and Kupiansk, which Ukraine says were retaken on 10 September, were both key supply hubs for the Russian forces. As such, these represent important strategic gains.
There is also a Ukrainian counter-attack around the Kherson region in the south of the country.
The Institute for the Study of War (ISW) says Ukrainian troops have inflicted a "major operational defeat" on Russian forces.
Justin Bronk of the Royal United Services Institute said Russian positions in Kharkiv had suffered a "total collapse".
The Russian withdrawal was, he said, "certainly the most dramatic reverse that we've seen from the Russians since they retreated from Kyiv in April".


How has Russia responded?​

Russia confirmed that its forces retreated from Izyum and Kupiansk. It said this was a strategic withdrawal to "regroup".
It has also said it will continue to target these areas with military strikes.
The Russian army appears to have abandoned large quantities of equipment and ammunition during the withdrawal.


How much territory does Russia still occupy?​

Russia still holds about 20% of Ukraine, according to the ISW.
The areas are largely in the eastern Donbas region and in the south of mainland Ukraine, as well as the Crimea peninsula which Russia annexed in 2014. 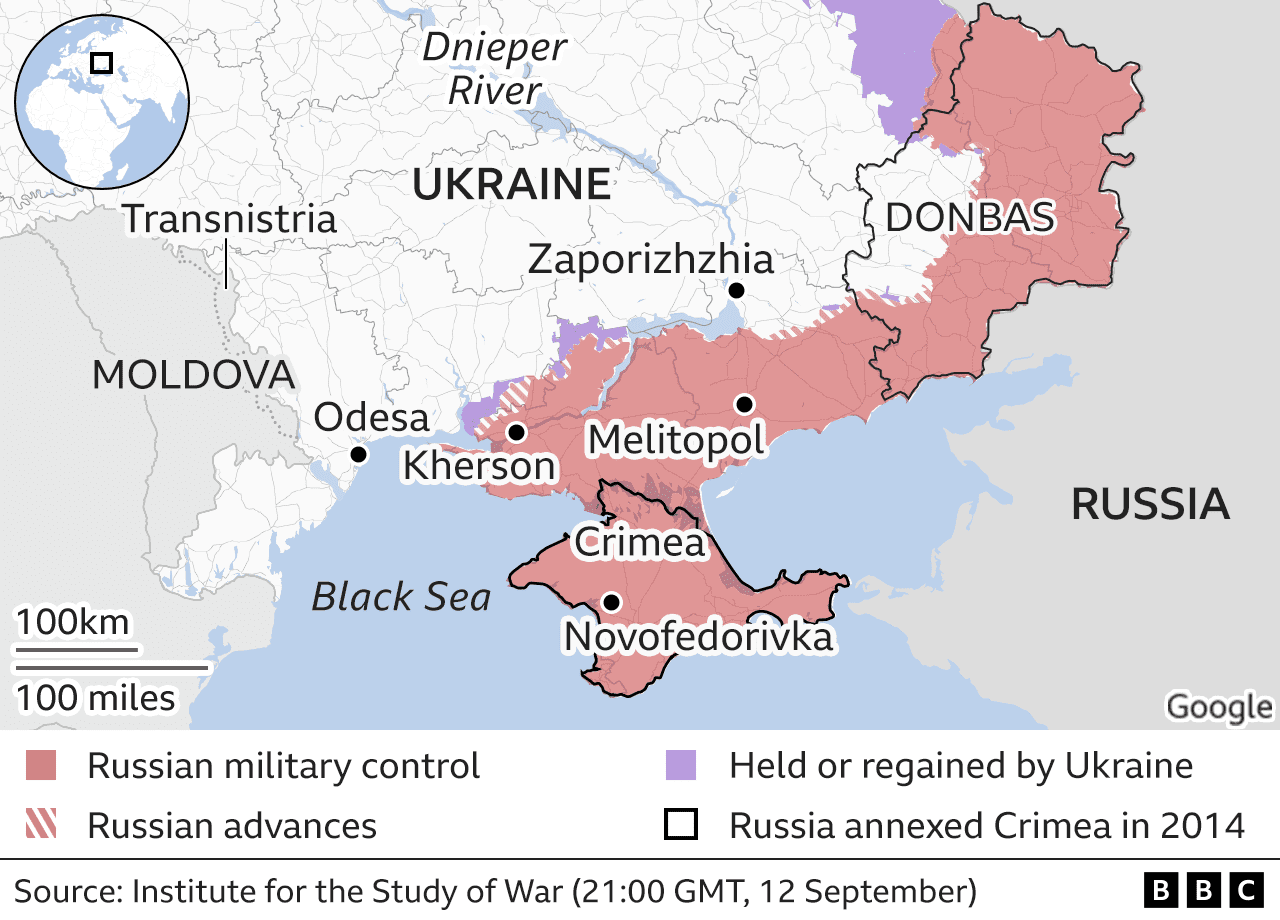 The Donbas is a mainly Russian-speaking area, and after Russia seized Crimea in 2014, pro-Russian forces captured more than a third of the region. It created two so-called people's republics there.
Areas in the west of the country, including Lviv, have experienced missile attacks, but no attempt by Russian forces to take and occupy ground.


What does Russia want?​

Russia refuses to recognise its invasion as a war, and says it is undertaking a "special military operation" in Ukraine.
The Kremlin said its operations would continue "until all the tasks originally set" had been achieved.
When launching the invasion in February, President Vladimir Putin said his goal was to "demilitarise Ukraine". 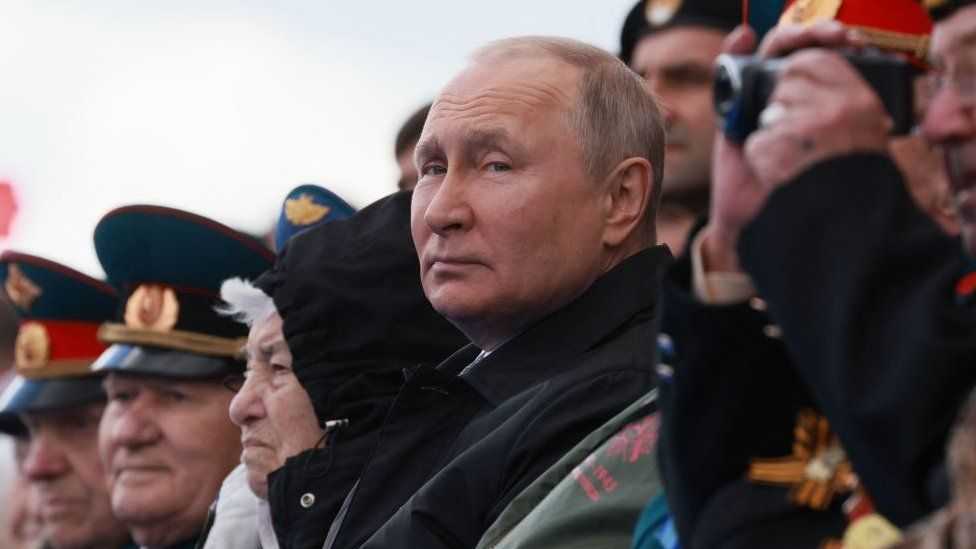 IMAGE SOURCE,GETTY IMAGES
One objective was to ensure Ukraine didn't join the Western defensive alliance, Nato.
Russia's initial aim was to overrun Ukraine and depose its government.
However, it now appears to have limited its ambitions to securing land in Ukraine's east and south.


What does Ukraine want?​

Ukrainian President Volodymyr Zelensky has said his main goal is to drive all Russian troops out, to "de-occupy our whole territory".
Mr Zelensky has appealed for more funding and equipment to retain the areas retaken from Russia.
Western shipments of weaponry are being used heavily by Ukrainian forces.


How many have people have died?​

Both sides have suffered losses, although neither publish exact numbers.
Ukraine claims it has killed more than 50,000 Russian troops, and at the end of August said it had lost nearly 9,000 military personnel since the start of the conflict.
Russia rarely discloses its own troop fatalities. Its most recent death count was in March, when it said 1,351 Russian soldiers had died since the invasion began.

IMAGE SOURCE,GETTY IMAGES
In July, US officials estimated that about 15,000 Russian soldiers had died.
Civilians have also died. At the start of September the United Nations corroborated more than 5,700 deaths.
However, it said the actual number is likely to be considerably higher.