The length of a man's fingers can provide clues to his risk of prostate cancer, according to new research.

A British Journal of Cancer study found men whose index finger was longer than their ring finger were significantly less likely to develop the disease.

Researchers made the discovery after comparing the hands of 1,500 prostate cancer patients with 3,000 healthy men.

The length of the fingers is fixed before birth and is thought to relate to sex hormone levels in the womb.

Being exposed to less testosterone before birth results in a longer index finger and may protect against prostate cancer later in life, say researchers at the University of Warwick and the Institute of Cancer Research.

One of the report authors, Professor Ros Eeles, said more studies would be needed, but if these confirmed the findings it could be used a simple test for prostate cancer risk.

She said: "This exciting finding means that finger pattern could potentially be used to select at-risk men for ongoing screening, perhaps in combination with other factors such as family history or genetic testing."

The study was funded by the charities Prostate Action and Cancer Research UK.

Emma Halls, chief executive of Prostate Action, said: "This research brings us another step closer to helping determine risk factors for prostate cancer, which is possibly the biggest issue in current thinking about preventing and treating the disease.

"However, we are still a long way from reducing the number of men who die of prostate cancer every year and need more research and education in all areas to achieve this."

Dr Helen Rippon, head of research at The prostate Cancer Charity, said the research added to growing evidence that the balance of hormones we are exposed to before birth influences our health for the rest of our lives. 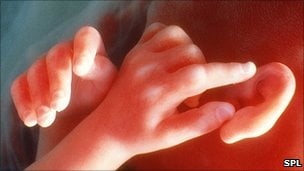 But she said men with shorter index fingers should not be "unduly worried".

"They share this trait with more than half of all men and it does not mean they will definitely develop prostate cancer in later life."

Do you or do they call this science?
Some of the so-called researchers say men with index fingers longer than the ring fingers have tendences to be gay. Combining this with the "findings" above, I come to a thinking that there can be some forced "truth" (not so scientific) because one of the measures to prevent prostate cancer is to do prostate massage. This is done anally. In their sexual activities, gay men have a way of stimulating/massaging the prostate and so, sort of, prevent the formation of that cancer.
Back to seriousness, does science permit generalization?
You must log in or register to reply here.