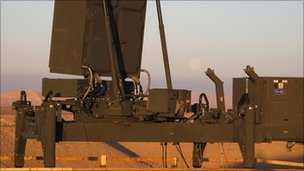 BAE Systems faces a fine for failing to keep proper records of payments to an adviser on a Tanzania radar deal.
The firm pleaded guilty to one count under the Companies Act of breaching its duty to keep accounting records.
A Southwark Crown Court judge suggested the "obvious inference" was that part of the secret £7.7m payment was used as a "bribe" to win the £28m contract.
But while BAE admitted it paid Sailesh Vithlani the prosecution did not allege corruption took place.
And BAE, which has already agreed a deal with the Serious Fraud Office, under which it offered to make an ex-gratia payment of up to £30m to Tanzania in east Africa, denies any such behaviour.
Prosecutor Victor Temple QC for the Serious Fraud Office said it was not part of his case that any part of the payments to Mr Vithlani was improperly used.
"To lobby is one thing, to corrupt another," he said. "The SFO's investigation ended with the plea agreement and the SFO has decided not to charge the company with any such offences," he said.
"Further, the SFO readily acknowledges that the company has gone to very considerable lengths to ensure that the conduct giving rise to the offence is never again repeated and has instituted appropriate standards of compliance."
BAE conceded that most of the money paid to Mr Vithlani was funnelled through a secretive company it set up in the British Virgin Islands.
It has also acknowledged that it did not keep proper accounts of the transactions, which it disguised as "payments for technical services".
However, the judge hearing the case, Mr Justice Bean said the "obvious inference" was that "part of the money was used to bribe decision makers" in Tanzania.
The judge said the arrangements meant the company "would have no fingerprints on the money".
He added: "They didn't want to know how much was paid and to whom."
He described BAE's behaviour as "hear no evil, speak no evil".
Sentencing will take place on Tuesday.

However, the judge hearing the case, Mr Justice Bean said the "obvious inference" was that "part of the money was used to bribe decision makers" in Tanzania.
Click to expand...

Baba anaingia ghalani kuiba chakula cha familia .!!
You must log in or register to reply here.