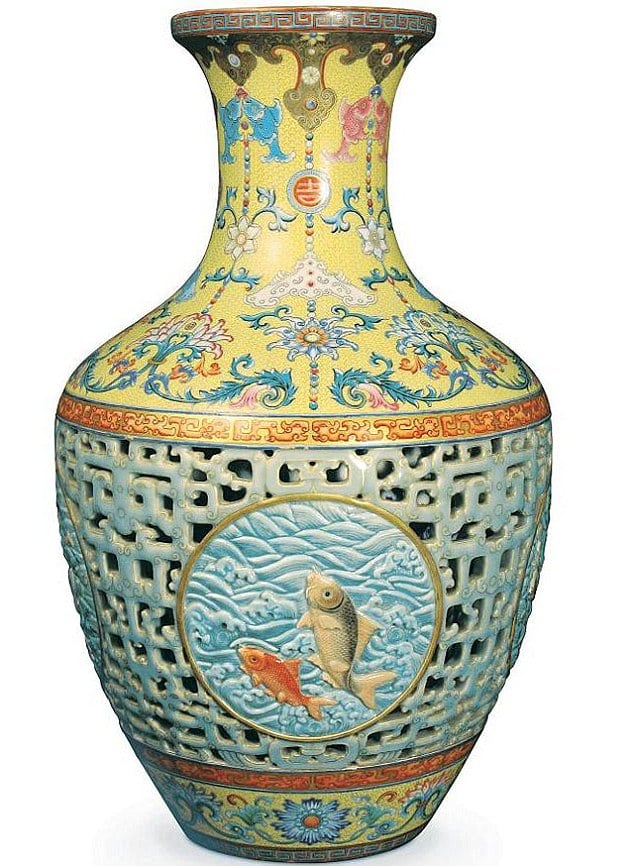 He kept it rather precariously on top of a bookcase in the living room  an elegant Chinese vase with a fish motif on the front and gold banding that glistened occasionally in the sunlight.

One nudge could have sent it crashing to the ground at any time over the last several decades. But it wouldnt have been a disaster. The ornate porcelain ornament would have been worth an impressive £800 on the insurance.

That, at least, was the theory  and it might have stayed that way had the vase not caught the eye of an expert after a modest semi in Pinner, north-west London, was cleared in the wake of the owners death.

What the art world now knows is that the 16-inch tall vase is the most expensive piece of Chinese porcelain ever to come on to the market  creating a whirlwind of excitement after it was sold at auction on Thursday for £53.1million.

It was described variously as a masterpiece, exquisite and a world record discovery that became the antiques story of the 21st century.

So yesterday the riddle of how it journeyed from an 18th century royal palace in Beijing to a lounge in the suburbs became a Chinese puzzle that had historians and art experts across the globe scratching their heads in disbelief.

Today the Daily Mail can reveal that the vase belonged to an elderly man who inherited it from his uncle, an explorer who travelled frequently to the Far East. When the man died this year it was left as part of his estate to his sister, in her seventies, and her married son, in his forties.

At a chaotic, crowded sale on Thursday night, they watched in disbelief as frantic bidding changed their fortunes in a matter of minutes. Bidding suddenly rocketed from £500,000 to tens of millions.

Last night the pair were virtually in hiding after their lottery-style win, pleading with the auction house to honour a promise that their identities would not be revealed.

That left interested parties from around the world scrambling for detail about the provenance of an artwork which, it emerged yesterday, was the most expensive item of Asian art ever sold, as well as the worlds priciest objet dart, excluding paintings and bronze sculpture.

Today it forms the centrepiece of a tale that involves an auction house more used to selling £500 mahogany armchairs than something which reaps an £8.6million commission (not including VAT); a breathtakingly inaccurate estimate of what it might fetch; and a gloriously comic Del Boy moment when  just like the auction scene in one Only Fools And Horses Christmas special  the son had to go outside for a breath of fresh air when it became clear they had been unwittingly sitting on a fortune.

Yesterday Pinner was swarming with journalists and TV camera teams trying to track down any tiny clue to the provenance of the 1740 Qianlong dynasty piece.

The Mail has discovered that the explorer uncle spent the inter-war years of the 1920s and 1930s travelling the world and left it to the family with a remarkable collection of mementoes, maps, antique travel books and ornaments.

The vase, fired in the Imperial kilns and marked with the Imperial seal, was made for the Emperor by a master craftsman. It is thought to have left its rightful royal home towards the end of the 19th century, in a period of widespread looting and theft. By the 1930s, however, China was going through a depression and great change.

So the question is, did the explorer unwittingly buy it for a pittance from a dodgy dealer in Beijing? Or was it a gift from some colonial type who didnt know its true value?

That part of the chronology may never now be determined. As the auctioneers themselves put it: If only the vase could speak.

Hence, the modern-day chapter of this story unfolds not in China, but 5,000 miles away in Pinner. The area does have an association with Ming and Qianlong but they are take-aways, not dynasties.

So it was to Ruislip that the late owners family looked when they were arranging to clear the house, believed to have been a semi-detached bungalow.

How fortunate for Bainbridges Auctions and house-clearance services that they happened to have put a flyer through the letterbox of the dead chaps sister, who lives nearby. In September she received a visit from sale room manager David Reay.

At this stage, incidentally, lawyers had valued the vase for probate purposes at just £800. Remarkably, with hindsight, the family wondered if the bookcase on which it stood was more valuable (in fact it sold later for just £200 with other personal effects totalling £7,000).

But one item, sitting on a plastic shelf at Bainbridges when their consultant valuer came in, had been removed from the house sale. Luan Grocholski, an expert in ceramics who worked for Sothebys, caught only a glimpse of the vase in the stockroom  but it was enough to set his pulse racing.

I saw and just thought it couldnt be true, he said. I realised the quality was fantastic, and assumed it was a very high quality copy. He began to look in libraries and at other works from the same period, a research quest that eventually took him six weeks.

He and the auction house thus set their estimate of its value at £800,000 to £1.2million, hoping it might rise to a few million with luck. They did not anticipate the astonishing appetite of a cash-rich Chinese market to buy back its stolen or exported relics.

On Thursday evening, potential bidders filed into the two-storey warehouse beside West Ruislip Underground station. The musty room was cluttered with furniture and old paintings and bidders had to squeeze up to get in.

Among them  their identities unknown to anyone except Mr Reay  the mother and son watched in silence, possibly anxious as the vase was placed on what someone described later as a wobbly old table at the front of the room.

After a slow start, with six live bidders and three telephone bidders still in the game, the interested parties narrowed to two as the price soared into tens of millions. It took less than two minutes to rack up the final £20million, climaxing at an astonishing £53million.

Auctioneer and company director Peter Bainbridge shouted Sold and slammed his gavel so hard on the rostrum, it shattered into several pieces.

He had just earned the family-run company at least £8.6million in commission, possibly several million more if they didnt waive the usual extra fees.

The mother and son had just chalked up a fortune beyond their wildest dreams.
They will have to pay Capital Gains Tax of around £12million
but they will be cheered by the fact

that if its true value had been known at the time of probate, they would have received an inheritance tax bill of more than £17million.

Meanwhile in Beijing, an anonymous Chinese collector had just scooped a unique and historic treasure for his homeland.

The bidder who bought the vase was a Chinese man in his thirties, acting as agent for the buyer and
sitting quietly on a sofa at the front of the room.

Yesterday at Bainbridges the engagingly eccentric Mr Bainbridge, 63, was happily posing for photographs and willingly re-enacting the drama of the previous night.

In a quieter corner, Mr Reay, who had comforted the sellers as the bidding got higher, said: Whats so wonderful about it is they are very normal people.

They dont have a lot. The mother just couldnt speak, she was in tears.

They stayed at the back of the room, out of sight, and no one knew they were there, not even Peter Bainbridge.

This is the biggest shock of their lives. The mum said to me, If only this had happened to me 30 years ago.