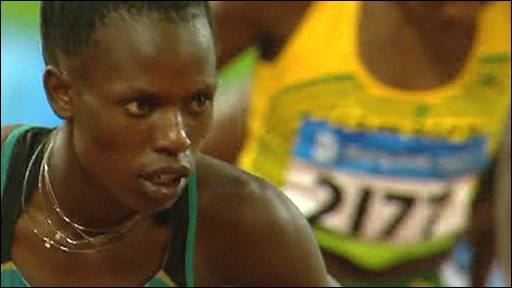 Pamela Jelimo powered to a brilliant 800m victory to become the first Kenyan woman to win an Olympic title.

The 18-year-old, who only began running the event in April, set a devastating pace to win in one minute 54.87 seconds at the Bird's Nest stadium in Beijing.

Janeth Jepkosgei could not match her compatriot and took silver ahead of Morocco's Hasna Benhassi.

Veteran Maria Mutola, who was competing in her sixth Olympic Games, finished out of the medals in sixth. 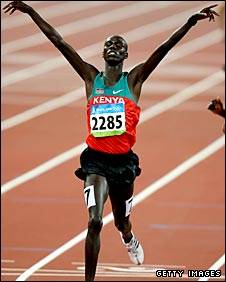 The 23-year-old held off a late charge from Mahiedine Mekhissi-Benabbad of win in eight minutes 10.34 seconds.

Kipruto, runner-up at Athens 2004, ensured the title has gone to a Kenyan at every Games since 1980.

The last non-Kenyan to win the event was Poland's Bronislaw Malinowski, who took gold at the 1980 Moscow Games, which the Kenyans boycotted.

Kipruto's time was comfortably below Qatari Saif Saeed Shaheen's world record of seven minutes 53.63 seconds, with Mekhissi-Benabbad coming through in 8:10.49 and Mateelong a further 0.12secs adrift.

Sweden's Somali-born Mustafa Mohamed took up the reins but with four-and-a-half laps to go, American Anthony Famiglietti upped the pace of a slow race.

Famiglietti faded badly after that as Mohamed, Kemboi and Mekhissi-Benabbad moved to the fore.

The last lap saw Kipruto burst through with team-mate Mateelong, the world bronze medallist from Osaka 2007, and Mekhissi-Benabbad.

Kipruto held off the Frenchman in the final sprint for the line.

Catherine Ndereba of Kenya (front) gestures as she crosses the finish line ahead of Zhou Chunxiu of China in the women's marathon of the athletics competition at the Beijing 2008 Olympic Games in the National Stadium August 17, 2008.

Catherine Ndereba of Kenya celebrates after winning the silver medal in the women's marathon at the Beijing 2008 Olympics in Beijing, Sunday, Aug. 17, 2008.​

Gold came double for Kenya on Monday with Brimin Kipruto (left) winning the 3,000-m steeplechase and Pamela Jelimo (second left) finishing first in the 800-m. Adding the icing on the cake, Richard Mateelong (right) took bronze in the steeplechase while Janeth Jepkosgei won Silver in the 800-m. Photos/MOHAMED AMIN​

Nancy Jebet Langat of Kenya gestures as she crosses the finish line to win the women's 1500m final of the athletics competition in the National Stadium at the Beijing 2008 Olympic Games on Saturday. Photo/REUTERS​
Nancy Langat won the gold medal in the womens 1500 metres at the Birds Nest stadium on Saturday in a time of four minute 00.23 seconds.

And in the men's 5,000m final, Kenya was placed second and third position as Ethiopia's Bekele bagged the gold medal in 12 minutes 57.82 seconds.

In the 800m, Bungei hit the front soon after the bell and drove clear to win in one minute, 44.65 seconds, giving Kenya their first victory in the event since 1992.

And as Langat took the women's title, Ukraine took silver and bronze medal positions through Iryna Lishchynska and Nataliya Tobias.

Maryam Jamal of Bahrain led until she was overtaken by Langat with 250 metres remaining.

Jamal, the current world champion, faded badly and missed out on a medal position, ending up in fifth place.

Wilfred Bungei of Kenya (2246) crosses the finish line first to win the men's 800m final of the athletics competition in the National Stadium at the Beijing 2008 Olympic Games August 23, 2008. The other competitors are Nabil Madi of Algeria (1007), Alfred Kirwa Yego of Kenya (2251), who finished third, Gary Reed of Canada (1295), Ismail Ahmed Ismail of Sudan (2914), who finished second, Yeimer Lopez of Cuba (partially obscured), Nadjim Manseur of Algeria (1008) and Yusuf Saad Kamel of Bahrain.

Men's 800m winner Wilfred Bungei celebrates with compatriot Alfred Kirwa Yego, after the final in the National Stadium at Beijing. Picture by REUTERS.​ 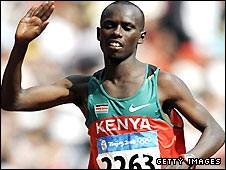 Wanjiru set a phenomenal pace from the first 100m​
Sammy Wanjiru won Kenya's first ever gold in the men's marathon, breaking the Olympic record despite the soaring heat in Beijing.

Wanjiru, who was among the leading pack which set the fast early pace, pulled away in the final kilometres to win in 2 hours six minutes and 32 seconds.

Wanjiru, 21, and compatriot Martin Lel set a punishing pace in the first five kilometres which reduced the leading pack to eight, with Spain's Cheme Martinez the only non-African.

The leading pack was then whittled down to five as Wanjiru pushed the pace up a notch at the 15km mark, and 20km later just Wanjiru, Gharib and Ethiopia's Deriba Merga could sustain the phenomenal tempo.

Wanjiru always looked the stronger of the trio and the Kenyan, who made his marathon debut last year, made a final spurt to win by a comfortable margin.

Gharib and Merga were left to fight it out for silver and bronze, but the latter fell away in the last two km to finish fourth. 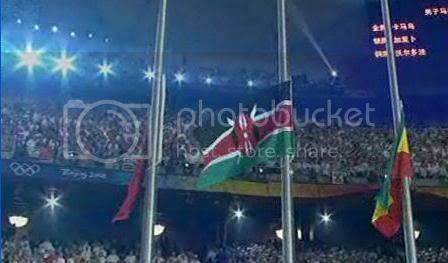 These guys have done kenyans proud. Over a bilion people heard the national anthem of kenya being played as samuel recieved his marathon gold medal during the closing ceremony. After such a bad start to the year, this feels good.

hongereni
You must log in or register to reply here.