HIV- Aids: EU to Approve ONE-PILL-A-DAY Treatment, What About The Rest Of The World?!

I think this is another symbollic catch up for the EU on something the US federal government approved over a year ago. Will the rest of the world now follow suit?

The EU is expected to approve the first one-a-day combination drug to treat HIV this week, at a time when infection rates in Europe are rising.

The pill, called Atripla, is to be marketed by Gilead Sciences, a US biopharmaceutical company, and Bristol-Myers Squibb, the US drug group. It marks a significant change in the treatment of the disease.

Just a few years ago, patients were often forced to swallow up to 30 pills a day, and these frequently caused serious side-effects. In the past few years, there has been significant progress. GlaxoSmithKline's Trizivir, for example, an existing combination treatment, has to be taken just twice a day. The current leading treatment in Europe - Truvada and Sustiva - also involves two different pills.

Atripla is the first one-pill, one-a-day medicine. It combines the active ingredients of three widely used antiretroviral drugs (Sustiva, Emtriva and Viread) in one pill and has a good safety profile.

Public awareness of Aids has fallen slightly in Europe as the disease has become a chronic, manageable condition thanks to scientific progress. It is no longer a death sentence, providing it is caught early.

Mike Ward, an analyst at the life-sciences investment bank Nomura Code, said: "It used to be that a person would be diagnosed, and two years later they were dead. Now, it's a long-term condition, but still with a lot of managing involved."

Paul Carter, vice-president of international commercial operations at Gilead, said: "We're trying to work with policy-makers and opinion leaders in the HIV field to raise awareness that infection rates are increasing in Europe."

According to EuroHIV data from the European Centre for Disease Prevention and Control, the rate of new HIV infection in the European Union has almost doubled since 1999, from 28.8 to 57.5 per million inhabitants. UNAIDS says that about 2.4 million people are living with HIV in the region. In 2005, an estimated 300,000 new infections occurred in Europe.
Click to expand...

Whereas, in States the same motion was approved in June last year:

The federal government on Wednesday approved the first HIV treatment that packs a triple-drug cocktail into a one-a-day pill.Doctors say the salmon-colored pill will vastly simplify AIDS care and turn what a few years ago was a bothersome regimen of 20 or 30 tablets to one pill taken before bed.

To be sold as Atripla, the pill includes doses of three drugs now sold in the USA by two companies. The drugs are Bristol-Myers Squib's Sustiva and Gilead Pharmaceutical's Truvada, a combo of Viread and Emtriva.

Taking the trio as a single pill makes it less likely that patients will miss doses, which would allow the virus to rebound and become resistant to treatment, doctors say. Keeping the virus in check also helps lower the risk that a patient will infect someone else.

"To me, it achieves the ultimate goal," says AIDS specialist John Bartlett of Johns Hopkins University. "It's a pill you can take without regard to meals, it's about as potent a regimen as we have, and it's relatively free of side effects."

The Food and Drug Administration approved the drug in three months, as part of a fast-track process introduced two years ago, after research showed the pill is equivalent to the drugs taken separately. The wholesale price of a 30-day supply of the pill will be $1,150.88, the same as Truvada and Sustiva purchased separately, Gilead officials say. Atripla is expected to be on sale within four days.

"It's a big step forward from where we were 10 years ago," says Norbert Bischofberger, Gilead's vice president of research and development. "Even though (anti-HIV drugs) had a miraculous effect, they were impossible for anybody to take long-term."

FDA's acting commissioner, Andrew von Eschenbach, told reporters Wednesday that "compliance with therapy is as important as therapy itself."

Robert Spellman, 58, of New York, was diagnosed with HIV in 1990 and began taking AIDS drug cocktails soon after they became available in 1996. "In all, I think I took maybe 35 pills a day. It was horrible," he says. "It made you nauseated. It was embarrassing. If you were out somewhere, you didn't want to take a ton of pills."

Bischofberger says that 60% of HIV patients in the USA take the three drugs, but not in one pill.

The approval also means that the drug can be made available in the developing world through the President's Emergency Plan for AIDS Relief. Gilead is negotiating those prices with Merck, which owns the marketing rights to Sustiva outside the USA and the major countries of Europe, Bischofberger says. Both companies offer steep discounts in poor nations.

Even if the drug costs less than a dollar a dose, the price of many generics, it may be too high for many countries to afford, says Kevin DeCock, director of World Health Organization AIDS programs. "We have to accept there's no way that treatment can be paid for by these countries on their own."
Click to expand...


And a hope for Africa somewhat lies in Uganda, but what about the rest of the world?

A factory that will produce treatments for HIV/Aids is opening in Uganda, the first of its kind in the country.
It aims to reduce the cost of the vital medication by cutting import costs. 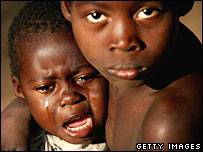 President Yoweri Museveni will open the plant in the capital, Kampala. Uganda has won praise for its vigorous campaign against HIV/Aids.

A factory in Kenya has been manufacturing exactly the same three-in-one pill for several years and is providing the tablets to the East African region.

Health Minister Stephen Malinga told the BBC the aim was to reduce Uganda's reliance on expensive imports of vital HIV/Aids and malaria treatments from foreign countries.

Sub-Saharan Africa has the world's highest rates of HIV/Aids and malaria.

Ugandan drugs importer Quality Chemicals will produce the medicines locally with Indian pharmaceutical company Cipla, one of the world's largest producers of generic drugs. It hopes to sell them in Uganda and other African countries.

"[Ugandans] will have access to a regular supply of medication and also we hope it will be cheaper, because we will be eliminating the element of transportation and manufacture in foreign countries," Dr Malinga said.

Leonard Okello, from aid group ActionAid International, told the BBC that distributing the treatment was the biggest hurdle to overcome.

"The important thing is for the tablet to get on to the table..." he said.

"The challenge is to make sure that the production is followed by a good distribution system that makes sure that the drug can reach all corners of the country."

Finding affordable and effective medicines, which is already a huge challenge, is increasingly unreliable in Africa.


Many countries turned to Indian pharmaceutical companies that produce generic copies of drugs designed in the West at much lower prices.

But India tightened its patent laws in 2005, restricting its companies' ability to copy newer foreign drugs.

In South Africa, some companies are already producing the treatments locally. Other sub-Saharan African countries including Ghana, Tanzania, the Democratic Republic of Congo and Ethiopia are working to start local production of the drugs.

According to World Health Organization figures, only 41% of Ugandans who need anti-retroviral therapy receive the treatment.

After reaching a peak of 30% in the 1990s, Uganda has cut its HIV/Aids figures to single digits.
Click to expand...


Scientists are no further forward in developing a vaccine against HIV after more than 20 years of research, a Nobel Prize-winning biologist has said.
Professor David Baltimore, president of the American Association for the Advancement of Science (AAAS), believes the battle is too important to give up on, despite some saying a vaccine will never be found. 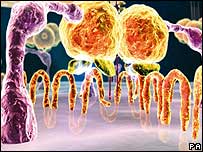 HIV has evolved to protect itself from the human immune system

"This is a huge challenge because to control HIV immunologically the scientific community has to beat out nature, do something that nature, with its advantage of four billion years of evolution, has not been able to do," he said.

"Our lack of success may be understandable but it is not acceptable," he added.

Speaking at the annual meeting of the AAAS in Boston, Prof Baltimore said HIV had evolved a way to protect itself from the human immune system.

"I believe that HIV has found ways to totally fool the immune system," he said. "So we have to do one better than nature."

Attempts to control the virus through antibodies or by boosting the body's immune system have ended in failure.

This has left the vaccine community depressed because they can see no hopeful way of success, he said in his presidential address to the conference.

Scientists are now turning to novel techniques, such as gene and stem cell therapy, although they are still in their infancy.

"In the human you really only have one shot which is to try to change genes in stem cells," said Prof Baltimore, one of the leading experts on the HIV virus.

"So we're trying to do that, to design vectors that can carry genes that will be of therapeutic advantage."

Prof Baltimore won the Nobel Prize in Medicine in 1975 for the co-discovery of reverse transcriptase, an enzyme that was later found to be used by HIV to replicate in human cells.

He now leads the Baltimore laboratory at Caltech, with support from the Gates Foundation, to look for ways to genetically boost the immune system against infectious agents, particularly HIV.

SteveD said:
I think this is another symbollic catch up for the EU on something the US federal government approved over a year ago. Will the rest of the world now follow suit?
And a hope for Africa somewhat lies in Uganda, but what about the rest of the world?
Click to expand...