Updated: Thursday, 28 Oct 2010, 3:04 PM CDT
Published : Thursday, 28 Oct 2010, 3:04 PM CDT
MEMPHIS, Tenn. - The Memphis Grizzlies exercised the fourth-year contract options on guard O.J. Mayo and forward Darrell Arthur and the third-year option on center Hasheem Thabeet, Grizzlies General Manager and Vice President of Basketball Operations Chris Wallace announced today. All three players are now guaranteed through the 2011-12 season.
Mayo, the third overall pick in the 2008 NBA Draft, holds career averages of 17.9 points, 3.8 rebounds and 3.1 assists in 38.0 minutes in 165 games (all starts). The 6-4, 210-pound guard posted 17.5 points, 3.8 rebounds and 3.0 assists in 37.9 minutes last season, and was the only Grizzlies player to start and play in every game.
The 22-year-old, who has yet to miss a game in his NBA career, entered the 2010-11 season with more minutes logged (6,234) than any other NBA player in the last two seasons aside from Philadelphias Andre Iguodala.
Arthur, who missed most of his sophomore season due to right pectoralis surgery, bounced back this preseason to average 11.1 points (4th on the team) and 6.3 rebounds (2nd) in 24.9 minutes in eight games. The 6-9, 235-pound forward, who stepped into the starting lineup last night and scored a career-high 19 points in the Grizzlies regular season opener vs. Atlanta, has posted 5.4 points, 4.2 rebounds and 0.5 assists in 17.9 minutes in 109 games (66 starts) with the Grizzlies, who acquired his draft rights (27th overall) during the 2008 NBA Draft. A key member of the 2008 NCAA Champion Kansas Jayhawks, the 22-year-old recorded 4.5 points and 3.4 rebounds in 14.3 minutes in 32 games last season.
Thabeet, the second overall pick in the 2009 NBA Draft, ranked second among rookies in blocks (1.31) while averaging 3.1 points and 3.6 rebounds in 13.0 minutes in 68 games (13 starts) last season. The 7-3, 267-pound center led all NBA players (min. 60 games) in blocks per 48 minutes (4.84). The 23-year-old, who was named the 2009 Co-Big East Player of the Year (along with current San Antonio Spurs forward DeJuan Blair) in his third and final season at Connecticut, is the first Tanzanian-born player to play in the NBA.
The Grizzlies (0-1) will look to bounce back from last nights opening night defeat, as they travel to Dallas to play the Mavericks at 7:30 p.m. tomorrow night at the American Airlines Center. The game will be televised locally on SportSouth HD.


Memphis Grizzly Hasheem Thabeet: Is It Already Too Late? 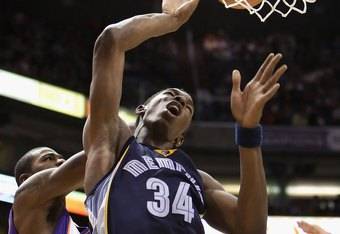 
Where do I begin?
The Grizzlies took Hasheem Thabeet with the second overall pick in the 2009 draft. Since being drafted, Thabeet has shown that there is still a lot of work to be done and who knows when he will actually make an impact.
Thabeet was a solid player while attending Connecticut and was known to be a top-five selection. The Grizzlies took him at No. 2, ahead of players such as Tyreke Evans, Stephen Curry and Brandon Jennings. Evans and Curry were highly decorated collegiate players, but no one knew that Jennings was going to be as good as he is. Knowing what we know now, the Grizzlies should not have taken Thabeet.
According to reports, GM Chris Wallace wanted to take Stephen Curry with the No. 2 overall pick, but owner Michael Heisley wanted to take Thabeet. Since Heisley is the owner of the Grizzlies, they were forced to go with Thabeet.
I'm guessing they're regretting that decision right about now.
Thabeet has been highly criticized since his arrival in Memphis. He was the highest draft pick ever to be sent down to the NBA Developmental League. He played six games in the NBDL and established dominance in the NBA's version of the minor leagues. Thabeet started four games for the Dakota Wizards and averaged 13.8 points, 11.2 rebounds and 3.2 blocks per game.
How Would You Say Hasheem Thabeet Will Fare In The NBA?

But, when he got his chance to return to the NBA, he just looked lost. He seemed to be too slow to keep up with the big boys and was a fouling machine.
In fact, the problem remains. The 2010-11 season is still very young, so it's hard to gauge Thabeet thus far. But, from what I've seen, he'll be a longtime work in progress and personally, I don't think that he'll ever be a quality starter that can go out there and average a double-double. He stands at 7'3" but height isn't everything.
There are more qualities a player needs to have instead of just being tall and Thabeet just doesn't have those abilities right now. I will give him one small excuse-he didn't start playing basketball until he was 15, so he is still learning how to play. But, with the experience he's received in college and in the NBA, he should have picked up on a few things by now.
In Thabeet's rookie campaign he played in 68 games (13 starts) and averaged 3.1 points, 3.6 rebounds and 1.3 blocks per game.
Not only did he have a shaky rookie season, Hasheem "The Dream" was also involved in an altercation with R&B singer T.I.D. According to reports, Thabeet punched the singer in the face, knocking him unconscious.
Apparently, when T.I.D woke up, his cell phone was missing and the singer went to the police station to file a case against Thabeet. Was this the beginning of a tumultuous stay in Memphis? Who knows?

Christian Petersen/Getty Images
Entering this season, Thabeet was immediately listed as the backup to Marc Gasol, the starting center for the young Grizzlies team.
I went to the Grizzlies opening game against the Atlanta Hawks where they lost, 119-104. From what I saw Thabeet had no idea what he was doing on the court. He made numerous mistakes, including a missed dunk right before halftime.
The Grizzlies fans weren't saddened when Thabeet would be taken out of the game. In fact, they were ecstatic. Every time he got taken out fans cheered and clapped as Thabeet, head down, walked towards the bench.

Coach Lionel Hollins also seemed to have a stern conversation with Thabeet as soon as he sat down on the bench. His stat line for their 15-point loss? 19 minutes, 0 points, three rebounds, two blocks and two turnovers. Not too good for a sophomore player in the NBA, even though he is still developing.
His stats through three games this season: 39 minutes, one point (0-5 FG, 1-2 FT), six rebounds, 0 assists, three blocks, three turnovers, six fouls.
But apparently the Grizzlies still have some confidence in the Tanzanian. The Grizzlies picked up the option on Thabeet on Oct. 28 and they are now required to pay Thabeet $5.1 million next season. Really? $5.1 million? He hasn't even showed that he could be worth $one million, much less $five million.
It may not be the right decision to give up on a No. 2 overall pick after two seasons, but the money they will have to pay him is downright ridiculous. For the Grizzlies, it would have been a good business decision to let Thabeet go, but I can see where they're coming from. There is still a glimmer of hope that Thabeet could be a possible starter, but that hope is dwindling fast.
If I was owner Michael Heisley, I would have given up on Thabeet a long time ago. Actually, I would have never taken him in the first place. There were so many other players on the board that have performed better than Thabeet thus far.
Stephen Curry is the leader of the Warriors. Tyreke Evans put up numbers that rival Michael Jordan, LeBron James and Oscar Robertson in his rookie campaign. Brandon Jennings averaged over 15 points per game and led the Bucks to the playoffs. There were also other players that played decent, such as Darren Collison, DeJuan Blair, Ty Lawson, Omri Casspi, Marcus Thornton, Terrence Williams, Jrue Holiday and Jonny Flynn.

Did I name enough? With the way some players performed last season, Thabeet may not have even been a first-round selection. But he was and now the Grizzlies have to deal with the consequences.
Thabeet will forever live in infamy as a tall player that was selected high in the draft and never live up to expectations (Shawn Bradley, anybody?) That's what Thabeet is right now-another Bradley. Not a good deal for the Grizzlies.
Memphis Grizzly Hasheem Thabeet: Is It Already Too Late? | Bleacher Report

what is wrong with us Tanzanian?do we really have the winning mentality?something is just amiss with us cause we just can't show consistency in success while abroad.Footballers have failed to shine abroad,our runners excel only in a single race then fade.please Hasheem for once show that we can also fight for success in tough competitions.

Bravo Ndugu Shadow
Thank you for the update about Thabeet. But I think he can manage to stand up

Lonestriker said:
what is wrong with us Tanzanian?do we really have the winning mentality?something is just amiss with us cause we just can't show consistency in success while abroad.Footballers have failed to shine abroad,our runners excel only in a single race then fade.please Hasheem for once show that we can also fight for success in tough competitions.
Click to expand...

"dogo anapumulia machine" this is so harsh