Happening Now: John Kerry a new secretary of state in US

Source cnn: senator John Kerry will replace Hillary Clinton if confirmed but he is supported by numbers of republicans.
us President: Kerry has played a key role in foreign policy debates.
B 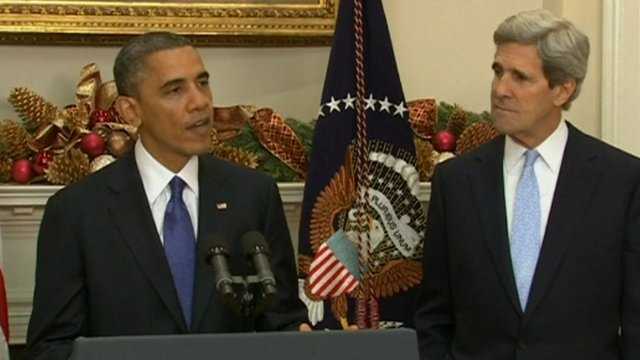 US President Barack Obama: John Kerry is the "perfect choice"

US President Barack Obama has nominated Senator John Kerry to succeed Hillary Clinton as his next secretary of state.

Mr Obama said Mr Kerry's "entire life" prepared him for the role, and praised him for the "respect and confidence" he has earned from world leaders.

Mr Kerry ran as Democratic presidential candidate in 2004 and is chairman of the Senate Foreign Relations Committee.
His nomination comes after the US ambassador to the UN, Susan Rice, withdrew from consideration last week.

Republicans had fiercely criticised her role in the aftermath of the deadly attack on the US consulate in Benghazi, Libya, in September.

Influential senator
Speaking at the White House, Mr Obama said Mr Kerry understood the need to "harness all elements of American power", and said the veteran senator was "not going to need a lot of on-the-job training".The president added that he was sure Mr Kerry would be swiftly confirmed in the Senate.

Mrs Clinton, who is still recuperating from a stomach virus and concussion, was not present for the announcement. But in a statement, Mrs Clinton said Mr Kerry was an "excellent choice" of head for the state department.

"He will be able to sustain and extend America's global leadership," she said. Mr Kerry, 69, becomes Mr Obama's first new cabinet nomination since he won a second term in November.

The president will also have to name a new defence secretary to replace Leon Panetta, and a new director of the CIA to take over from David Petraeus, who quit last month after admitting an affair.

Mr Kerry, a decorated Vietnam veteran, lost a close presidential election to George W Bush in 2004 and had been a contender for the state department in 2008, before Mrs Clinton was chosen. The BBC's Washington correspondent, Kim Ghattas, says Mr Kerry is well-steeped in the details of world affairs and diplomacy.

She says he has been the Obama administration's unofficial envoy to various hotspots, from Pakistan to Afghanistan.
Mrs Clinton has indicated she will step down early next year. Mr Kerry will have to give up his seat in the Senate, where he represents the state of Massachusetts. The Democrats may face a tough battle to keep it in the subsequent election.

Analysts say Mr Kerry's nomination is unlikely to face opposition from Republicans, who had threatened to oppose Ms Rice, despite the president's strong defence of her actions over Libya.

Mr Kerry himself had spoken up for Ms Rice, saying: "I've defended her publicly and wouldn't hesitate to do so again because I know her character and I know her commitment. She's an extraordinarily capable and dedicated public servant."

Ms Rice's troubles began days after the 11 September assault on the US consulate. She said in a series of TV interviews that it seemed to have developed out of protests over an anti-Islamic film. But later intelligence reports suggested the attack was carried out by al-Qaeda affiliates.

Her comments triggered a major political row over who knew what and when, and whether the consulate was adequately protected.

[h=2]Senator John Kerry[/h] [h=2]In many ways John Kerry is the quintessential American diplomat. His father was in the Foreign Service. Mr Kerry has lived abroad and speaks French. He can sit for hours sipping tea with world leaders. But it's often hard to tell where he stands on the issues[/h] [h=2]John Kerry Profile[/h] 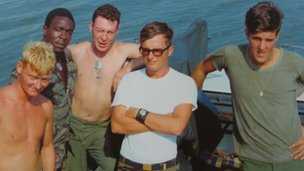 In many ways John Kerry is the quintessential American diplomat. His father was in the Foreign Service. Mr Kerry has lived abroad and speaks French. He can sit for hours sipping tea with world leaders. But it's often hard to tell where he stands on the issues

He is likewise retired CIA Agent !

I wish Condeleezza angekuwa Democrat
You must log in or register to reply here.

China will find out the "Concequences "as it happens Trump roers

Apr 14, 2020
Mr What
M
Coronavirus: What’s happening around the world?