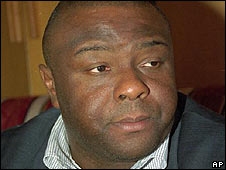 Mr Bemba is accused of
widespread rights abuses in CAR


The former vice-president of the Democratic Republic of Congo has been arrested in Belgium on charges of war crimes and crimes against humanity. Jean-Pierre Bemba, who fled Congo last year, was detained near Brussels late on Saturday after the International Criminal Court issued a warrant. Mr Bemba is wanted for alleged atrocities committed by his forces in the Central African Republic in 2002.

He went into exile after being accused of high treason in his home country. He was accused of refusing to disarm his militia after his defeat in presidential elections in 2006, and of unleashing violence in the capital, Kinshasa. Mr Bemba has always denied the charges.

The successful businessman was one of four vice-presidents in a transitional government in the war-torn African nation between 2003 and 2006. He was leader of the rebel group, the Movement for the Liberation of Congo, which later became a political party. In 2002, his group was asked by the former president of the Central African Republic, Ange-Felix Patasse, to help put down a coup attempt. While there, Mr Bemba's forces were accused of widespread rights abuses. After Mr Patasse was ousted the following year, his successor pressed charges against Mr Bemba of rape and murder. The case was referred to the International Criminal Court in the Hague, which announced his arrest on Saturday.
Click to expand...

The bodies of at least eight people have been recovered from a grave found at the home of a former police officer in El Salvador, officials say