A spokesman said governing body the FIA "was appalled by the scenes of racist abuse targeted at Lewis Hamilton.

"Such behaviour runs counter to the fundamental principles of equality enshrined in the FIA's statutes."

Spain hosts two Grand Prix next season and the FIA threatened sanctions against them if steps were not taken to prevent a repeat of the racist abuse the 23-year-old McLaren driver endured. 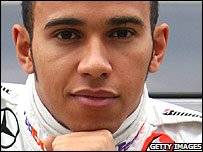 Results from qualifying for the Malaysia Grand Prix:

McLaren Mercedes Formula One driver Lewis Hamilton of Great Britain gets out of his damaged car after crashing during the second free practice for the - Friday April 4:, 06:07 PM

Ferrari's Kimi Raikkonen extended his championship lead with a comfortable win at the Spanish Grand Prix.

The Finn is nine points clear of Lewis Hamilton, whose McLaren was third behind Felipe Massa's Ferrari.

Raikkonen controlled the race, while Massa held off a late challenge from Hamilton, who himself had race-long pressure from Robert Kubica's BMW.

Fernando Alonso's Renault, which had qualified second to Raikkonen, retired from fifth place with engine failure.

The race was disrupted by two interventions by the safety car, the first on the first lap and the second following a nasty accident involving McLaren's Heikki Kovalainen.

The Finn lost control of his car following a breakage somewhere in the left front wheel area heading into the 150mph Campsa corner.

After two bad races, to be back on the podium is fantastic

The McLaren speared straight over the gravel trap and was embedded in the tyre barrier.

It took the medical team 10 minutes to extract Kovalainen from his damaged car, but he was conscious as he was taken away on a stretcher and could be seen giving a thumbs up to the crowd.

It is believed he has no injuries, but he was taken to hospital in Barcelona for medical checks

McLaren believe a stone became lodged between the tyre and the wheel rim, causing a sudden tyre deflation.

Raikkonen was in a league of his own at the front, as the Finn built a lead in the first stint and then paced himself to Massa for the rest of the race.


"I didn't make the perfect start but did enough to stay in front," said Raikkonen, who collected his 17th Grand Prix victory in Barcelona.

"After that it was closer than we expected but at least we had the speed all weekend.

"If we wanted, we could have gone a bit faster but there was no point in pushing more than we need to."

Massa added: " We did our homework and we brought home two Ferraris first and second which is a great position for the championships."

But Massa was never that far clear of Hamilton, who pressed the Brazilian hard to the end of the race, while at the same time conscious that Kubica was less than three seconds adrift of the McLaren in fourth place.

Hamilton is now nine points behind Raikkonen in the drivers' standings but was at least pleased to be back on the podium after finishing fifth in Malaysia and 13th last time out in Bahrain.

"After two bad races, to be back on the podium is fantastic. It's a great relief," he said.

"When we qualified fifth we knew it would be very difficult to match the Ferraris.

"It was a bad day for Heikki but I'm glad he's OK. Ron [Dennis] came on the radio and told me he was OK. I'm sure he'll bounce back and we will keep pushing forwards."

The second BMW driver Nick Heidfeld would probably have taken fifth place, but the German suffered a penalty for making a stop for fuel and tyres when the pit lane was closed during the safety car period.

Alonso's Renault was not fast enough to battle with the McLaren and BMW Sauber, but following Heidfeld's penalty the double world champion was heading for fifth place on merit before an engine failure on lap 35.

Cheered on by the partisan crowd, he lost a place to Massa on the run to the first corner, but held on to the Brazilian well until his first pit stop on lap 16.


Alonso retired, but not before giving notice of a Renault resurgence

As expected, Alonso was the first driver to pit but his strategy was not as outlandish as some had suspected it could be - Massa came in only three laps later.

Judging by Alonso's pace in the race, Renault appear now to be best of the rest behind the top three teams, which is a huge step forward from their lacklustre showing in the first three races.

"We had an engine problem - we blew up," he said. "Unfortunately, it is not the right place as it's my home Grand Prix, but I am very happy.

"We saw Massa stopping three laps later than us, so our qualifying was quite OK, and in the race we were close to BMW so I can enjoy racing again."

Alonso's retirement handed fifth place to Mark Webber, whose Red Bull team have also made a step forward with their car.

The Australian was comfortably clear of Honda's Jenson Button, who was the fastest man on the track in the final stint of the race.

The Englishman was himself some way ahead of the Williams of Kazuki Nakajima, with Jarno Trulli's Toyota taking the final points position.

The Italian was in sixth place behind Webber before a communication error led to the team calling him into the pits by mistake.

Nakajima's team-mate Nico Rosberg was ahead of the Japanese when he retired with an engine failure on lap 42. 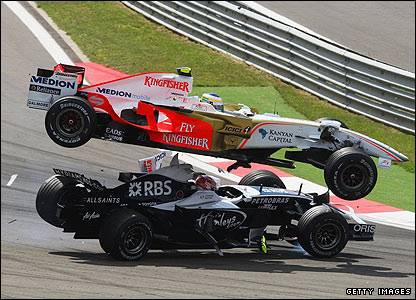 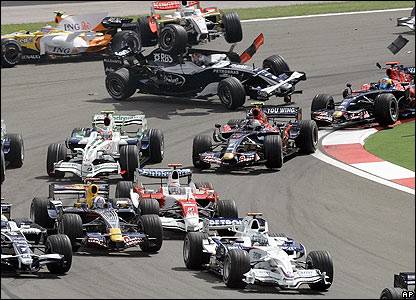 Lewis Hamilton said his first Monaco Grand Prix victory on Sunday was "the highlight of my career and probably will be for the rest of my life".

The Englishman survived a collision with the barriers in his McLaren to win the sport's most prestigious race.

Hamilton, 23, follows in the footsteps of his hero, the late Ayrton Senna, who won in Monaco a record six times.

GAME THEORY said:
hamilton just f'ed up
he is out
Click to expand... 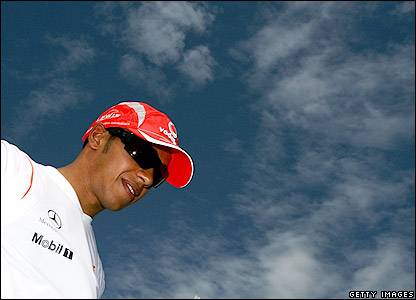