Dark Side of Dubai's Boomtown

It may be the world's biggest boomtown, but human rights groups say that Dubai's gleaming towers are being built on the backs of exploited foreign workers.

A tiny Arab emirate on the Persian Gulf, Dubai has been making a big splash as a city on the rise -- with a glittering skyline, world-class shopping malls and luxury resorts, all fueled by the grand vision of its absolute ruler, Sheikh Mohamed bin Rashid al Maktoum.

But in a scathing new report released in Dubai this weekend, the organization Human Rights Watch says the migrant construction workers building Dubai are little more than indentured servants in the wealthy kingdom, one of seven emirates in the United Arab Emirates (U.A.E.).

THE BLOTTER RECOMMENDS
Dubai Ruler Sued in U.S. Over Enslaving Small Boys
Human Trafficking: From Dubai to Brazil to Germany
Click Here to Check Out More of the Brian Ross Page
In an exclusive 20/20 story to air this Friday, Nov. 17, the ABC News investigative team went inside Dubai to learn how the emirate has grown so far so fast.

Just days after ABC News began asking questions, the government of the U.A.E. announced a series of reforms to improve the conditions of workers.

Dubai's building boom has been made possible by some 500,000 migrant construction workers, most from India, Pakistan and Bangladesh. Many work 12 hours a day, six days a week, in extremely hot temperatures that have led to illness and, in some cases, death. The workers live in crowded camps, with eight or more men sharing one small room.

In the Human Rights Watch report, called "Building Towers, Cheating Workers," researchers say that the average migrant worker receives a salary of about $175 a month. There is no minimum wage in Dubai, and some workers make as little as $8 a day.

Through extensive interviews, Human Rights Watch researchers found that employers in Dubai routinely abuse workers by withholding their wages for their first two months, along with their passports as "security" to keep them from quitting.

But the migrant workers have little freedom to quit since many have borrowed thousands of dollars to get the jobs to begin with, paying "recruiters" visa and travel fees, which under U.A.E. law should be paid by the employers, not the construction workers.

When workers arrive in Dubai, the construction jobs sometimes pay less than the recruiters originally promised. Desperate to repay their loans, the workers in those cases are trapped. And under U.A.E. law, it is illegal to switch jobs without permission from your employer. Unions are illegal, and striking workers have been deported.

"They are living in fear and in extreme anxiety," said Sarah Leah Whitson of Human Rights Watch, adding that some workers, feeling hopeless, have even committed suicide.

Dubai's defenders point out that construction wages and conditions are comparable, if not superior to those in neighboring countries.

After a series of well-publicized strikes and complaints over the last year, the U.A.E. has made some efforts to improve conditions for workers.

A law was passed to halt construction between 12:30 p.m. and 4:30 p.m. during the scorching summer months when temperatures reach well over 100 degrees. But Human Rights Watch said not all employers follow this law, and there are few government inspectors to enforce it.

Earlier this year, the U.A.E. announced that trade unions would be legalized. But to date, the government has failed to do so, according to Human Rights Watch, which says that without a strong message from the rulers of the U.A.E., little will change.

Just last week -- only days before Human Rights Watch report was released but a decade after the building boom began -- Sheikh Mohamed bin Rashid al Maktoum, ruler of Dubai, ordered stricter enforcement of the country's labor laws. In addition, he called for improved medical care for workers, a special court to address their labor complaints and an increase in the number of inspectors monitoring camps and workplaces.
Click to expand...

Let me help you. It had 3 large buildings only near the beach. 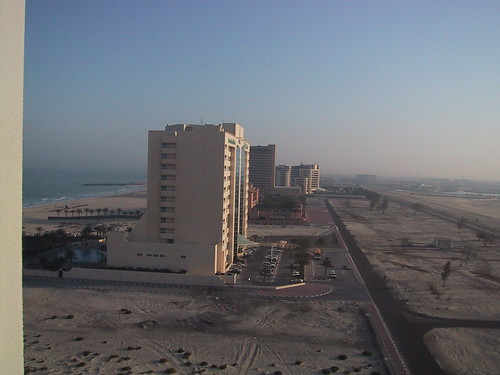 Take a look at Dubai's under Water train and other wonderful innovations.