#COVID19 COVID-19 is historical in Tanzania: Why don't USA, UK, EU and others copy from Tanzania how to fight against Coronavirus?

The UK has recorded 207 new Covid-19 related deaths – the highest number since March.

The total number of people who had died within 28 days of testing positive has reached 132,742.

Separate figures published by the Office for National Statistics show there have been 157,000 deaths registered in the UK where Covid-19 was mentioned on the death certificate.

The new daily figures come following a bank holiday weekend when there is usually a lag in reporting deaths and cases.

It comes after a new coronavirus strain, named Mu, has been designated a variant of interest by the World Health Organisation (WHO).

Mu, or B.1.621, was first identified in Colombia and cases have been recorded in South America and Europe.

The WHO's weekly bulletin on the pandemic said the variant has mutations suggesting it could be more resistant to vaccines, as was the case with Beta, but that more studies would be needed to examine this further.

The government’s announcement that people with severely weakened immune systems will get a third dose of a Covid vaccine has been welcomed by charities.

The booster, for people who are not likely to have generated a full immune response with the first two jabs, has been hailed as something that will give “much-needed reassurance and additional protection”.

Professor Eleanor Riley, professor of immunology and infectious diseases at the University of Edinburgh, said immunity should be “substantially improved” for severely immunosuppressed people with a third dose.

She added: “It would be wise to actively monitor the response to vaccination in this group of patients so that they can be advised individually of their immune status and adjust their daily activities accordingly.”

North Korea has asked that almost three million Covid jabs offered to it by China be redirected to hard-hit nations.

A UN spokeswoman said that North Korea had asked that Sinovac vaccines be offered elsewhere amid the global vaccine shortage.

The Sinovac vaccines were offered under the Covax scheme, which North Korea is participating in but has yet to receive any doses from.

North Korea, one of the first countries to close its borders in January 2020, claims that it has had no cases of Covid.

But this year, leader Kim Jong-un – who is rumoured to have been vaccinated against Covid –berated senior officials over a “grave incident” believed to be related to the virus.

The details of the incident have not been made public by the highly-secretive and insular country.

North Korea has expressed some doubt over the efficacy of the vaccinations, with its state media reporting on incidents in the US and Europe where people have had adverse reactions.

The five areas with the highest numbers of Covid rates are all in Scotland, according to latest data for the UK.

Covid-19 cases among Scottish youngsters have soared as they returned to school in mid-August, while pupils elsewhere in the UK have been set to return this week.

The figures, for the seven days to 28 August, are based on the number of people who have tested positive for Covid-19 in either a lab-reported or rapid lateral flow test.

Except for Fermanagh & Omagh and Swansea, all the areas with the top 20 highest rates of Covid are in Scotland.

Around half a million people who have severely weakened immune systems will be offered a third dose of a coronavirus vaccine, it has been announced today.

People with conditions such as leukaemia, advanced HIV and recent organ transplants who are over the age of 12 will be given a third jab following a recommendation from the Joint Committee on Vaccination and Immunisation (JCVI).

The announcement is separate to any decision on a booster programme, but it is understood news on that is expected soon. Health Secretary Sajid Javid said the government was continuing to plan for a booster programme to begin this month and said people most at-risk from Covid-19 would be prioritised.

No decision has been given either on any extension of the vaccine programme to include all healthy 12 to 15-year-olds.

83% of unvaccinated Americans say they don't plan to get the shots (msn.com)

A vast majority of unvaccinated Americans say they do not plan on getting COVID-19 shots, a new poll finds.

The survey, conducted by CNBC/Change Research, asked 1,775 Americans how they felt about the vaccines.

Of the respondents, 29 percent had not been vaccinated, and 83 percent of that group said that they never plan to receive the jabs.

There are not many things that could convince this segment of the population either with 84 percent saying even if the vaccines had no side effects they would not get the shots, and 87 percent would not get jabbed if they were mandated to do so by their employer.

Respondents to the poll offered different reasons as to why they were yet to be vaccinated. Just over one-third, 34 percent, of unvaccinated respondents said they refuse the shots because they do not trust the government.

The same amount of survey takers also said they fear side effects from the vaccine. Some just are not worried about the virus, with ten percent reporting that they would get jabbed if the Delta variant was more prominent in their community.

The Delta variant ravaged many unvaccinated communities across the country in recent months, and cases increased eight-fold during the month of July as the mutant strain took hold. Seven percent are still awaiting direction from former President Donald Trump, saying they would only get vaccinated if he asked them to.

President Trump has been a vocal supporter of the vaccine - even to the chagrin of some of his loyal supporters - and has used his post-presidency rallies to promote them to his followers.

Despite his vocal support for the jabs, Trump supporters are the group least likely to want the vaccines.
The CNBC poll finds that 87 percent of participants who voted for Trump in the 2020 presidential election are unvaccinated, and 60 percent of Republicans.

Demand for the shots has faltered in recent months, though, with less than one million Americans getting the shots every day - compared to over 3.5 million in early April. While the rise of the Delta variant - a more contagious strain of the virus that originated in India - causing massive case surges nationwide pushed up vaccine demand for a few weeks, the rate of Americans getting the shots has dropped once again.

The remaining unvaccinated adults have been hard to convince to get the shots, as even offering incentives like vaccine lotteries that failed to have much impact on vaccination.

The White House is now trying to leverage to power of employers to force Americans to get the shots. Last week, President Biden announced that every company with more than 100 employees will be forced to mandate vaccines on their employees.

Companies that do not comply will be fined $14,000 by the federal government. The President is also requiring all federal employees or contractors to get vaccinated in the next 75 days, or potentially be terminated.

The executive order will not include an option of being regularly tested to opt out of the vaccine requirement.
The orders will apply to workers in the executive branch but not the congressional or judicial.

======
Back in March, Israel thought it had seen the back of COVID-19. More than half of the country's 9.3 million population had received two jabs of a SARS-CoV-2 (coronavirus) vaccine. The number is now close to 60% of the country and rising.

Germany, by contrast, was trailing massively at the time — a mere 3.7% of its 83 million residents were double-jabbed by mid-March. We're now in the high 50s for first jabs, less for second jabs.

So, Israel was on a high. Anecdotal reports suggested face masks had all but completely disappeared from public spaces and life had returned to "normal."

Just four months later and things have changed again, with some countries warning Israel is a high-risk destination for travelers.

COVID cases have risen steadily since mid-July in Israel. The government says that's mainly among unvaccinated children, but there are some breakthrough infections as well.

Israel's health ministry has cited studies that suggest the level of protection from vaccines drops over time, especially against the delta variant.

So, Israel wants people to get a third dose of a vaccine to boost those antibodies and increase their chances of fighting the disease. It has been pushing that campaign at an incredible speed, with tens of thousands of people getting booster shots every day since the start of August.

Between May, June and July, the country was averaging zero deaths per day. That doesn't mean there were no deaths at all, but they didn't occur often enough for an average to be established.

By August 15, Israel was averaging two new confirmed COVID deaths per day. It has jumped up to nearly five in just one day.

Although it is tempting to compare these figures to those of other countries, and there are higher and lower rates of infection and death, let's stay focused on Israel. 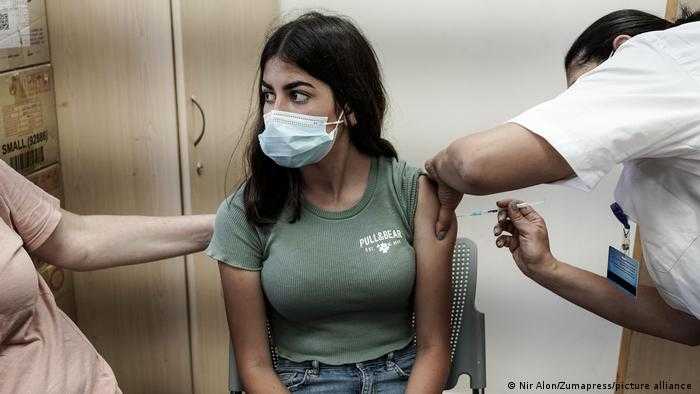 
Why are infections rising in Israel?​

It probably has something to do with the delta variant of the virus.

There's been some reluctance to declare delta as the dominant variant in Israel. Some say it is and some say it isn't.

But in a briefing on August 14, Israeli Prime Minister Naftali Bennett did say that "the outbreak of the delta strain around the world and in Israel" was "engulfing the world."

That suggests the delta variant is behind many of the infections in Israel.

In addition, the Ministry of Health of Israel has reported "a marked decline in the effectiveness of the vaccine in preventing infection (64%) and symptomatic illness (64%) [since June 6]. This decline has been observed simultaneously with the spread of the delta variant in Israel."

A Reuters report at the time suggested that the end of social distancing restrictions in Israel had also played its part.

Israel has approved two COVID-19 vaccines: The Pfizer/BioNTech and the Moderna. Both are novel mRNA vaccines. Both reported an initial effectiveness of about 95%. 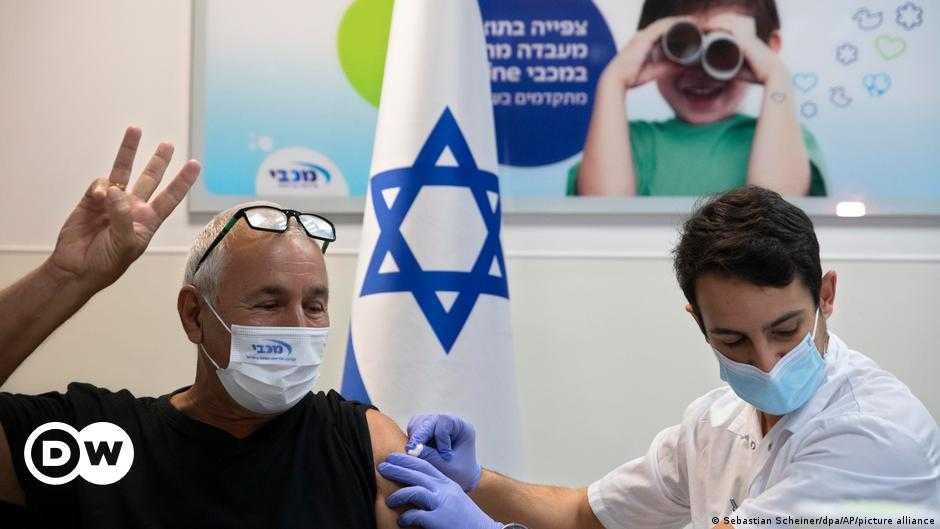 With almost 60% of the country fully vaccinated, Israel has seen a life after COVID-19. But now infections are on the rise. What's going on? Will a third jab help?