It's a scene that - with just a few changes - you might have found in the central African bush in the late 19th Century.

Ploughing through the long grass is a foreigner in a wide-brimmed sun-hat, scribbling away in a notebook. Alongside, a deferential African bearing a long pole. The two are barely able to communicate with one another.
You're reminded, irresistibly, of images of Victorian era explorers such as David Livingstone and Henry Morton Stanley, hacking their way across the continent. But this foreigner comes from a country that suffered from colonial exploitation itself.

Biggest deal
He's Chinese, an engineer, and his assistant's pole is not for beating down the vegetation. It's a global positioning tool, taking satellite readings to plot the exact course of a road that's about to be built. The pair belong to an advance team of surveyors deployed to the Democratic Republic of Congo by a massive state-owned firm based in Beijing, the China Railway Engineering Corporation, or CREC.

And the new road they're planning will be the first fruit of the biggest single deal China's ever done in Africa, worth $9bn.

Due to be signed in Beijing in the next few days, it gives DR Congo $6bn of desperately needed infrastructure - about 2,400 miles of road, 2,000 miles of railway, 32 hospitals, 145 health centres and two universities.

In return, China gets a slice of DR Congo's precious natural resources to feed its booming industries - 10m tonnes of copper and 400,000 tonnes of cobalt.

Infrastructure
It's a barter deal - what the Chinese side loves to call "win-win". Not aid with strings attached, like Western powers have given DR Congo over the years, but pure business.

Decades of kleptocratic dictatorship and brutal civil war have brought DR Congo to its knees. Most of its infrastructure barely functions.

"People talk about roads, schools, water - they hardly see anything from the huge assets."

The Chinese ambassador to DR Congo, Wu Zexian, is equally frank about his country's agenda: "China needs many things. In this world China cannot live closed off which is why we have adopted a politics of openness towards the outside world. We must come to a co-operation that benefits everyone."

The fine print of the deal was negotiated over two months in Beijing by Paul Fortin, a corporate lawyer based in Monaco who now runs DR Congo's state-owned copper and cobalt mining company, Gecamines.

He clinched it by finding a mine - in Kolwezi, in the southern copper belt province of Katanga - that had enough proven reserves to persuade the Chinese that it was financially safe for them to begin disbursing a first tranche of money for infrastructure projects - about $3bn - right away.
China's state-owned Exim Bank, which is financing this deal and many others in Africa, is still taking on a level of risk that few Western banks would consider.

Joint venture
It'll take about three years, and another $3bn or so of investment, before the disused mine - formerly owned by the Belgian Forrest Group - is up and running.

When production begins, the Chinese companies signing the deal - CREC and Sinohydro - will disburse a final $3bn on roads, railways and hospitals.
The idea is that China will recoup its total investment within 10 years.
Thereafter the joint venture - one third DR Congolese, two-thirds Chinese - continues to exploit the mine. 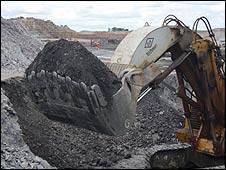 Paul Fortin believes the deal - and the rapidly rising price of minerals - will jump-start the economy of a region depressed after years of war.
"This was thriving and jumping in the 1920s and 30s," he says. "Now it has a chance to restart. It's like you go back to Klondike and say: 'Hey guys, we're reopening again.'"

And yet, despite China's pledge of openness, the deal has still not been published - to the fury of human rights groups.

"Our worry is that it is almost totally opaque," says Katanga-based lawyer Georges Kapiamba, who eventually obtained a copy.
"It permits a group of Chinese to get more than the Congolese - it's not a win-win contract."

Kapiamba says the deal amounts to a licensed plundering of DR Congo's resources similar to that carried out under the country's colonial ruler, King Leopold II of Belgium.

A copy of the original DR Congolese-Chinese memorandum of understanding obtained by Newsnight appears to exonerate the Chinese side from all taxes and customs duties until the promised building work is completed.

Victor Kasongo, the deputy mining minister, says DR Congo "will do whatever's necessary to keep the Chinese on board".

Scrutiny
But critics say the problem is not just fiscal privileges. 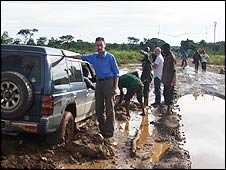 The whole arithmetic of the deal unfairly favours the Chinese. At current world prices for copper and cobalt, they claim, the Chinese side of the joint venture will make a colossal overall profit of about $42bn after all the investment's been paid.

Paul Fortin of Gecamines dismisses that argument as "rubbish", because it ignores continuing production costs and interest repayments.
"Without the Chinese," he adds - pointing to the disused Kolwezi mine - "all this will be just be scenery."

There's no doubt about Beijing's bravado. But until the deal can be properly scrutinised, the doubts will continue. "We can't understand why they're signing under these circumstances," says the human rights lawyer Georges Kapiamba. "We need a commission of jurists to consider whether it's in the interests of the Congolese."
K