---
Burundi has banned the importation of maize grain over toxins, Chimp Corps report.

It’s the second country after Kenya to ban grain imports this March over the same reasons.

Burundi Minister of Commerce Immaculate Ndabaneze said in a statement this Tuesday that, “There is a ban on importation of grains in Burundi this season because of aflatoxins and mytoxins.

Aflatoxins are a family of toxins produced by certain fungi that are found on agricultural crops such as maize (corn), peanuts, cottonseed, and tree nuts.

Mycotoxins are naturally occurring toxins produced by certain moulds (fungi) and can be found in food.

The moulds grow on a variety of different crops and foodstuffs including cereals, nuts, spices, dried fruits, apples and coffee beans, often under warm and humid conditions.

The development comes at a time Uganda is furious over the trade restrictions being imposed by neighboring countries.

Uganda remains open to imports from its neighbors.

The Speaker of Ugandan Parliament Rebecca Kadaga today directed government to present a statement briefing the country on what action is being taken.

“We shall take our resolution whether the government comes here (Parliament) or not,” charged Kadaga.

Kadaga hinted on possible reciprocal action against neighboring countries implementing protectionist policies which are against the spirit of the East African Community. 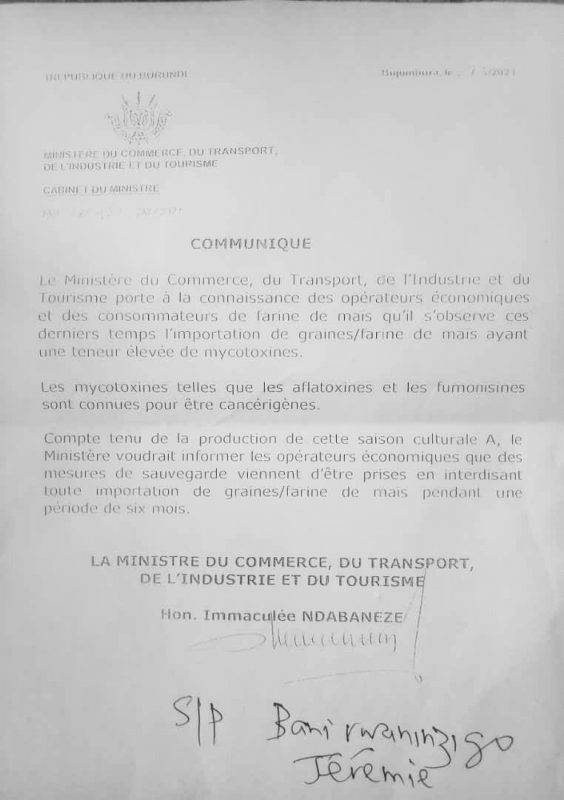 Burundi’s statement banning importation of maize​
During today’s plenary session, MP Abdu Katuntu said, “It is not a favour for our people to trade with Kenya. This has been going on for long and we need to have action taken.”

Legislators expressed concerned by what they termed as “unfair treatment” by other countries in the region.

Hon Elijah Okupa said this was not the first time Ugandan traders were being treated that way.

“We need immediate action from government; the Prime Minister should come and brief this House on the action being taken,” said Okupa.

Kenyan media reports indicated that maize imports from Uganda rose five-fold in January compared to a similar period last year as traders and millers rushed to bring in the grain in anticipation of a shortage.

Data from Kenya’s Ministry of Agriculture showed the volume of maize brought into the country went up to 523,000 bags during the review period from 101,000 in January 2020, an increase of 418 percent.

The effects of the importation were being felt in the North Rift where the price of the produce had started coming down on account of increased supply in the market.

This could possibly explain Kenya’s reaction – to protect its farmers from low maize prices.

However, experts say Ugandan institutions must enable farmers improve harvest and post harvest handling before they can negotiate for high premiums and sustainable supply of agricultural products in the market.

9 March 2021
Bujumbura, Burundi
9 Mar 2021
#Burundi's Commerce Ministry bans the import of corn seeds and flour for six months. The Permanent Secretary of the Ministry of Commerce Jéremie Banirwaninzigo explains that corn seeds and flour with a high content of mycotoxins that includes aflatoxins and fumonisins can be carcinogenic