LAGOS, NigeriaIt ain't easy bringing Africa the hamburger.
In the past year, Johnny Rockets Group Inc. in Nigeria opened its first retro diner on the continent, and Burger King Worldwide Inc. cut the ribbon on the first of at least 200 restaurants it plans for South Africa and nearby countries. Next year CKE Restaurants Inc. plans to build Hardee's eateries in Nigeria and South Africa.
Some of the burger world's biggest names are introducing the American culinary classic to Africa's expanding consumer class.
But that quest is straining a supply chain that is short on the refrigerated trucks and warehouses needed to keep patties and vegetable toppings fresh. And in many places, Africans are consuming beef at a faster clip than cattle ranchers can deliver new cows, meaning beef prices keep climbing. That is testing the limits of what the continent's young urbanites can afford.
Enlarge Image 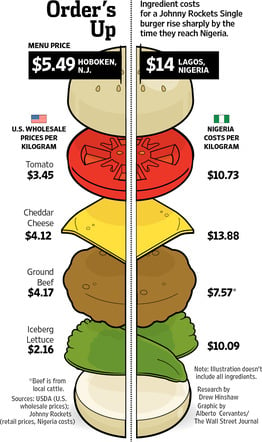 Some companies are treading cautiously, unsure that Africa is ready for combo meals. McDonald's Corp. has 177 restaurants in South Africa but has little appetite to enter the rest of the continent.
To others, though, now is the hour.
"Africa, it's the last continent," says Geoff Spear, CKE's vice president of international development. "If we don't start today, it'll never happen."
The success of chicken and pizza offers hope for hamburgers. Yum Brands Inc.YUM -0.48% has about 1,000 KFCs in Africa, up from about 600 in 2010. The five outlets of Domino's Pizza Inc. in Nigeria are the company's busiest by volume world-wide, says Nigerian franchisee Eric Andre.
A Rush of Fast Food

Kentucky Fried Chicken was among the first fast-food companies to expand to Africa and many American chains soon followed.
View Graphics 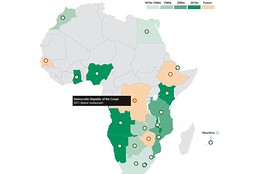 Still, Mr. Andre's experience rings alarm bells. Because of water shortages, he had to dig a well and install a water-treatment plant behind each restaurant, at $60,000 apiece. And only two of his 76 hires had ever tasted a pizza before so he had to fly management to Manhattan for a pizzeria tour.
For hamburger chains, perhaps the biggest problem is getting meat. From Nigeria to Namibia, slaughterhouses rely on local herdsman as a source of beef.
But herdsman come and go, says Jaye Sinclair, the chief executive of Burger King South Africa. That prompted Mr. Sinclair to invest $5 million in a local cattle ranch that is gearing up to churn out 1.2 million Whopper patties a week. The chain, he says, is in discussions to open restaurants in Angola, Kenya, Nigeria and Ghana.
In Nigeria, meat supplier Chi Ltd. is one of several agribusinesses building ranches in anticipation of the new burger chains. The problem is, Nigerian cattle tend to be pretty scrawny, says Chi Managing Director Martin Middernacht. And the ideal burger source, the European brown cow, succumbs to tropical disease here. So Mr. Middernacht has bred a new kind of cow.
For several years, Mr. Middernacht tried to coax French and Nigerian cattle to couple, but the pregnancies were rough. At one point, all his calves had to be delivered by caesarean section, forcing him to increase prices.
Having worked his way past those problems, Mr. Middernacht now is on track to triple the size of his 3-square-mile ranch. The next issue will be growing enough grass for grazing in this drought-prone area.
Just opening a restaurant and keeping it stocked can be unusually difficult, as well. Chris Nahman last year left a California law practice to bring the first Johnny Rockets burger shop to Nigeria.
Weeks before he was set to open last November, he was still searching for a beef supplier, his high-voltage equipment meant to fry patties instead fried his generator and refrigerators he had ordered from the U.S. had been misplaced in a New Jersey warehouse during Hurricane Sandy. A few, he was told, may have washed out to sea.
Mr. Nahman spent $15,000 to have the refrigerators sent by air. Not quite what he planned, he says. "You're supposed to airfreight caviar."
His final product for the 1950s style diner is pricey. To give an authentic taste of the U.S., he flies in onions, mushrooms and iceberg lettuce. Burgers start at $14 for the Rocket Single, a lone patty topped with a Cheddar slice.
Nevertheless, the diner serves a steady 300 to 400 customers a day, Mr. Nahman saysoil workers, bankers and Nigerians who have returned from the U.S. They aren't exactly the emerging African middle class, Mr. Nahman concedes, but they pay the bills.
In October Mr. Nahman welcomed a special customer. CKE's Mr. Spear was looking to open a Hardee's here.
"There's not 1,000 people a day who can eat a burger from Hardee's" in Nigeria, Mr. Nahman says.
Mr. Spear disagrees. "We just need to figure out how.

wsj
You must log in or register to reply here.