The young man who caused a media frenzy after

viewers claimed he had sexually assaulted a housemate

' Fingergate ' by the African media. The girl he allegedly

As reported on The First Post, viewers of the show watched in shock on October 28 as Bezuidenhout (left) appeared to insert his fingers into Molokwu ' s vgna after

an extended drinking bout that left her and another female

contestant vomiting repeatedly before apparently blacking out. Paramedics had to be called in and the show ' s producers cut the live feed.

At the weekend, in a studio in Johannesburg , I had the uncertain privilege of viewing what had been billed to me beforehand as an ' uncut ' version of the incident. It turned out that ' uncut ' meant a 12-minute edit taken from more than two hours of relevant footage. Watching the tape in the company of three M-Net executives, I saw the housemates get plastered, fall over in a drunken heap, sob uncontrollably, and vomit - well, the women, at least. Meanwhile, Bezuidenhout, a married man, unbuttoned his trousers, boasted about his "machinegun" and taunted the female housemates with a pledge to "bump" them all. The camera then cut to the bedroom, filmed in muddy black-and-white


night vision. Bezuidenhout was lying flat on his back in the middle of the bed. To his right, a huddled shape lay hidden beneath the duvet - Tatiana Durao, a 26-year-old Angolan with whom he has already had sex on the show. To his left lay Molokwu (pictured on previous page). Something was moving between her thighs - it looked like Richard ' s left hand. He seemed to be touching her private parts, and she seemed to be responding. She thrust her hips up and towards him, gripping his hand between her thighs. An idiot grin spread across Bezuidenhout ' s face.

The whole incident, rated suitable for 16-year-olds by the channel ' s censor, was filmed by a camera positioned so low that it looked right up between Ofunneka ' s thighs. The Big Brother producers have consulted with lawyers over the incident. Molokwu has said on air that she has no recall of the events of that drunken afternoon - but that was before the series came to an end on Sunday, when she had yet to learn of the public outrage or see the incident from the perspective of the viewer. The big question is whether she was conscious of what was happening to her - and the footage I was shown suggests she was.

M-Net production executive Carl Fischer defended the show ' s treatment of its contestants to me, saying television executives were not just bound by the laws of South Africa but also by the Big Brother rules, which he described as "tougher than the Constitution". Of course, that worthy document doesn ' t demand that South Africa ' s citizens sign away all rights to freedom and dignity 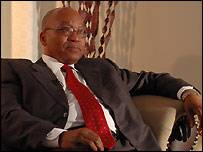 J. Zuma
You must log in or register to reply here.