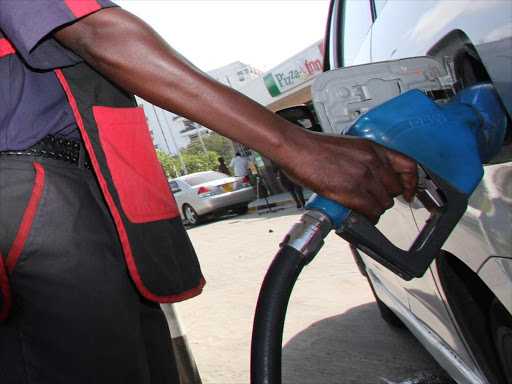 Kenya most expensive country to buy fuel in East Africa

Kenyans are paying up to Sh19 more for a litre of petrol compared to their East African neighbours of Tanzania, Uganda and Rwanda as heavy taxation takes a toll on consumers.

Motorists and transporters are paying more than double what their counterparts in Addis Ababa are paying, where a litre of petrol and diesel are retailing at an equivalent of Sh51.28 and Sh44.66, respectively.

In Uganda, which imports part of its fuel through the Port of Mombasa, a litre of super petrol is retailing at Sh131 which is lower compared to Kenya's Sh134.72.


A litre of diesel in the neighbouring country is slightly higher, by Sh2, retailing at Sh117.28 compared to Sh115.60, despite the products going through Kenya into the landlocked country.

A litre of petrol and diesel in Kigali(Rwanda) is Sh121.08 and Sh110, respectively, despite being a land-locked country importing through Tanzania and Kenya.

On Tuesday, fuel prices in Kenya hit a historic high after prices of petrol, diesel and kerosene increasing by Sh7.58, Sh7.94 and Sh12.97, respectively.

“The prices are inclusive of the eight per cent Value Added Tax in line with the Finance Act 2018, the Tax Act 2018, the Tax Laws(Amendment) Act 2020 and the revised rates for excise duty adjustment for inflation,” EPRA director general Daniel Kiptoo said.

The increase came despite lower global crude prices in August which averaged $70.75 a barrel, down from $75.17 in July, and a drop in the landed cost of fuel at the Port of Mombasa.

Consumers in the country pay at least nine different taxes on fuel products which constitute the biggest share of final pump prices.


They include excise duty which takes the lion's share of Sh21.95 of every litre of petrol followed by the Road Maintenance Levy (Sh18).

VAT has been adjusted upwards to Sh9.98 while the Petroleum Development levy is charged at Sh5.40.

The high fuel prices are expected to increase the cost of living in the country, where inflation has been rising since April, hitting an 18-month high of 6.57 in August.

Manufacturers and transporters have since warned of a jump in the cost of goods and services as they move to pass the high operational costs, occasioned by the fuel price jump, to the consumers.

Agricultural products are also expected to become costlier as diesel is a key input in production, mainly in large scale farming where machinery is used.

A number of other taxes introduced by the Finance Act 2021 are also expected to impact the cost of production in the country, affecting the prices of finished goods in the retail market.

The Consumers Federation of Kenya (COFEK) has since called on the President to request parliament to review the Finance Act.