CNN said:
 A home invasion during a farewell dinner for Tanzanias ambassador to South Africa left him seriously wounded Friday night, according to the South African Press Association.

The wife of Amb. Emmanuel Mwambulukutu and several of the guests at the dinner party at the Tanzanian diplomatic residence in Garsfontein, South Africa received minor injuries, SAPA reported.

Police said five armed men climbed over barbed wire and a wall and then ordered the 25 people inside onto the floor, SAPA reported. After taking cell phones, cash and household goods, the robbers left in the ambassadors vehicle, SAPA said.
Click to expand...

Tanzania's ambassador to South Africa was beaten unconscious and several of his guests were assaulted and robbed at his farewell dinner in Pretoria on Friday night.

About five armed men pushed aside the barbed wire and jumped over the wall of a diplomatic residence in Garsfontein around 10pm, a government official at the function told Sapa on Saturday morning.

"There were about 25 of us and we had just had supper. They ordered us to lie down, tied our hands, robbed us of cellphones, money and household goods," said the official, who asked not to be named.

He said Tanzania's High Commissioner Emmanuel Mwambulukutu was beaten unconscious and his wife stabbed in the head. Both were taken to hospital.

"Quite a few people were assaulted, hit with bottles. They kept threatening my 15-year-old daughter with rape."

According to the official the ambassador had told the thieves "gentlemen, God bless you", to which they allegedly replied: "We don't care for God. Let's stab these dogs".

The thieves packed the stolen goods into Mwambulukutu's 4x4 Mercedes and fled. Before doing so they pressed another man against a wall and "beat the hell out of him" when they failed to start his Audi.

He said police took about 25 minutes to arrive after guests called 10111.

"They [the police] kept asking us questions that delayed [them] while these guys were getting away.

"This is really embarrassing for South Africa. Most of the guests are Tanzanians who said they are going to leave this country."

Pretoria police spokesperson Captain Paul Ramaloko confirmed the attack and said Mwambulukutu was in a serious but stable condition. His wife and about six other people sustained minor injuries.

He said no shots were fired and no arrests had been made.

On July 21 South Africa's ambassador to the United Nations Dumisani Khumalo was robbed at his son's home in Greenside, Johannesburg after he returned from OR Tambo Airport. - Sapa
M

Police spokesman Paul Ramaloko said seven people were admitted to hospital after the attack at the home of a fellow Tanzanian that left ambassador Emmanuel Mwambulukutu unconscious and his wife with a stab wound to the head.
Click to expand...

Sasa hayo ya South yatafika na hapa kwetu maana hali ya maisha chini ya msanii wetu yanazidi kuwa impossible.They have nothing to loose except their chains........

Lunyungu, heshima mbele mkuu, read between the lines.....I dont necessarily mean that JK is better that Mbeki......Inawezekana pia hao wa SA wanafahamika kwa watawala kama 'ilivyokuwa' hapa kwetu..so JK go there and 'teach' them how to deal with it!

Things like this needs a political will .That;s all I can say abnout this matter of tackling crimes like this .Haya tuendelee .Tanzania JK anakaza uzi mzungu akiumizwa ama Mwekezaji akipatwa na mkasa lakini Mdanganyika wa kawaida hata kuandika hawa andiki so why nilie na Mwambulukutu ?Pole zake lakini the same attetion should be given to all Tanzanians popote walipo Duniani .
F 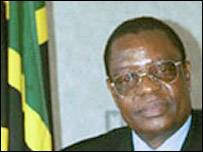 The ambassador is the latest high-profile
victim of violent crime

The Tanzanian ambassador to South Africa was beaten unconscious by armed robbers at his own farewell dinner in Pretoria, police say. The ambassador, Emmanuel Mwambulukutu, is said to be in a serious but stable condition in hospital.

Six other people were also taken to hospital after the attack, including the ambassador's wife. One person has been arrested.

South Africa has one of the highest rates of violent crime in the world.

A South African government official at the dinner told the South African Press Association that armed men broke into the diplomatic compound at around 2200 local time.

"They ordered us to lie down, tied our hands, robbed us of our cellphones, money, and household goods," he said.

"Quite a few people were assaulted, hit with bottles. They kept threatening my 15-year-old daughter with rape."

The robbers brandished weapons but no shots were fired. They made off in the ambassador's own Mercedes car after beating up another guest when they failed to start his Audi, according to the official, who was not named.

Police located the ambassador's car using its satellite tracking device and arrested one man. He was shot and wounded in the process, and taken to hospital under police guard.

Police say they are hunting his accomplices.

Calls for a crackdown on violent crime in South Africa have been renewed by a spate of attacks on high-profile targets. These include:


A Vietnamese embassy official shot and wounded at his home in Pretoria in October South Africa's UN ambassador robbed at gunpoint in his son's home in July.

But this latest attack seems to have been the most shocking yet.

The South African government official said the ambassador told the robbers at one point: "Gentlemen, God bless you."

They are said to have replied: "We don't care for God. Let's stab these dogs."
Click to expand...

Wakati tukikaribia kuitangazia dunia, What is Tanzania: The Royal Tour?
2 3