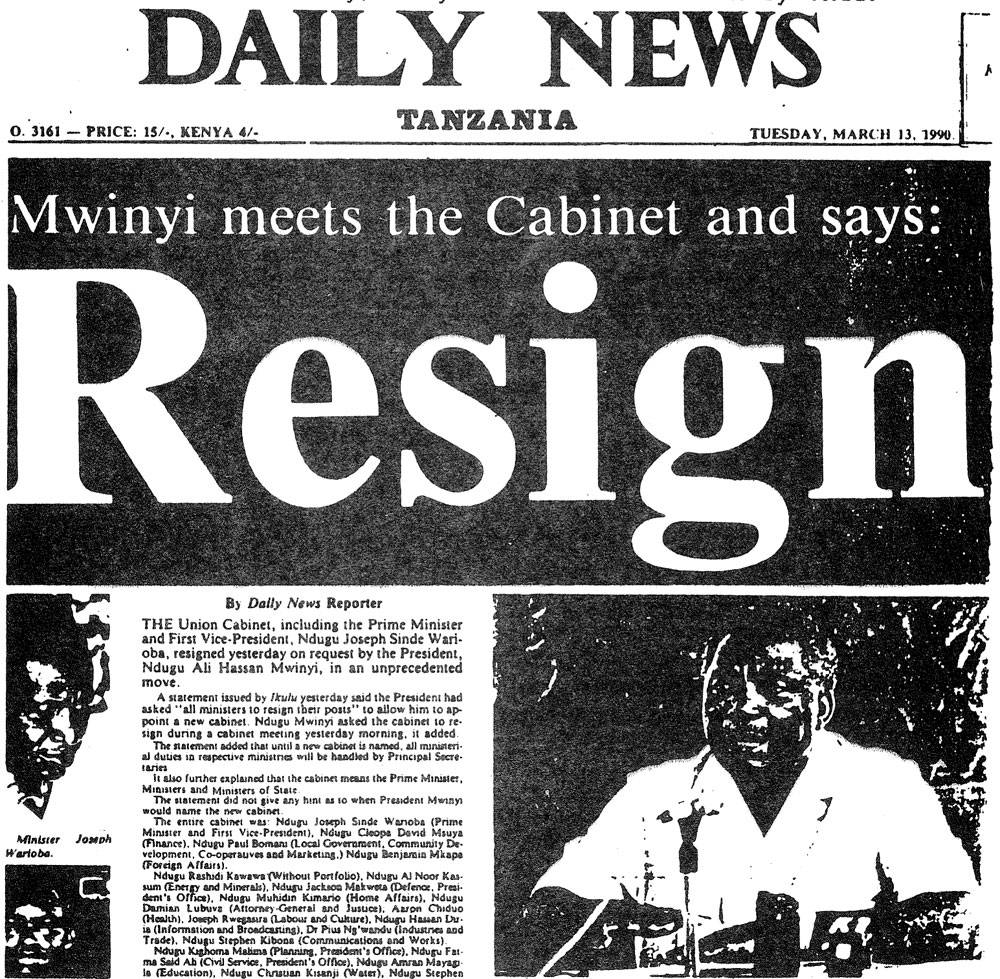 The ‘Daily News’ brought out its biggest ever headline on March 12th 1990 to report the shortest ever cabinet meeting.

Ministers arrived in their cars and, according to a report in Dar es Salaam’s ‘Business Times’, expected to be there for perhaps three hours. Many instructed their drivers to leave and come back later.

But the meeting lasted only three minutes. President Mwinyi indicated that he wished all 26 Ministers and 14 Deputy Ministers to resign immediately !

He later explained that the reason was to fight corruption, which was rampant in all ministries and because of the lack of accountabilty. Explaining the absurdity of the extent of evil in society. Mr Mwinyi said that even peanut sellers had to bribe people in order to operate. “We all behave as if the others have money and only we don’t and must therefore get it” he said. The President added that retired civil servants, or others, were also being asked to bribe in order to get their benefits. “If they refuse to give bribes they end up, being treated like shuttle cocks with endless promises and being asked to come tomorrow.”

After the short cabinet meeting, in the absence of their cars, several Ministers had to walk home! And one Minister, who had explained that he had an important engagement in Europe in a few days time had been told firmly to cancel it.

There followed two days of intense speculation in Dar es Salaam. According to ‘Africa Events’ there was much enthusiasm by the populace and a belief that something was, at last, about to be done about the rampant corruption. But when, two days later, President Mwinuyi announced that he had reappointed Mr Joseph Warioba as Prime Minister, there was profound disappointment. This was not because Mr Warioba was considered to be corrupt but because people thought that this was an opportunity for a clean break with the past and for a new beginning.

People had to wait another day before the rest of the new government was announced.

The Ministers, Pres1dent Mwinyi stated categorically, were not guilty of corruption; the fact that they had been removed from the government should not be misconstrued either by the public or the individuals themselves. All the seven were “nice, decent, and clean people, but this move is being taken because a lot of evils have been going on in their ministries. It is a question of accountability and nothing else” he said. Such malpractices were widespread throughout the government but they were worst in their ministries.” Actually, they have been let down by their subordinates” he said.

The President likened the plight of the ministers to his own problem in 1976 when he had had to resign as Minister for Home Affairs when forces under his ministry had misbehaved in Shinyanga where a number of people had died. “I never sent them there to misbehave, nor did they consult me about it, but then I was accountable” he said. He had realised how wise his predecessor Mwalimu Nyerere had been when he had advised him in 1985 at the time of the handing over of power to be ‘a little bit harsh’. He intended to be very harsh, he said – Daily News.

THE DEEPER REASONS
‘Africa Events’ in its April 1990 issue endeavoured to work out the deeper reasons behind the dramatic reshuffle. It stated that the CCM Party’s National Executive Committee had had before it at its meeting (February 7-12) the report of the ‘Committee of Enquiry into Corruption’ which had been set up two years earlier. The report had made extremely grim reading. 12 institutions including the Ministries of Health, Home Affairs, Justice and Lands had been highlighted as particularly notorious. Chairman Nyerere was said to have demanded that the ministers responsible should appear before the Central Committee of the Party. The Minister of Justice was said to have immediately submitted his resignation rather than accept what he regarded as undeserved humiliation. Apparently the Prime Minister had done likewise. However. the Minister for Home Affairs had been prepared to face the Central Committee but had indicated that what he would say would embarrass everybody. It was to avoid resignations and embarrassment that the decision to call on all to resign was taken according to ‘Africa Events’.

In a separate article in the same issue ‘Africa Events’ noted that when the cabinet was asked to resign Mwalimu Nyerere was several thousand feet up in the air on his way to Rome. When he had been President, Mwalimu had hardly ever sacked anybody. His loyalty to his colleagues was his weak point. Did he know what was going to happen? Apparently, President Mwinyi had gone to the airport to see Mwalimu off for Rome and immediately on his return to State House, he had assembled his ministers and ‘pulled out his long knife’. Again, according to ‘Africa Events’, those who were at Rome’s airport when Mwalimu arrived were under the impression that he had been taken completely by surprise. President Mwinyi had ‘fired his own volley and what a thunderous bang it has been’. ‘He now stands unquestionably tall despite his short physique. Tanzanians looked on in unconcealed joy. Dar es Salaam will never be the same again’ the article concluded.

The new cabinet has 24 members of whom four are new as is also one deputy minister. The cabinet is as follows:

The President stated that, although people wanted to see change, it would not have been proper to bring in a completely new team with only four months to go before Parliament is dissolved and fresh elections are held in October. If he had done so, the new ministers would still be finding their way around when elections were due.

“I WANT TO SEE RESULTS”

The major tasks of the new cabinet would be to fight corruption vigorously, cut costs and supervise work and I want to see results said President Mwinyi. People must be given loans under laid down procedures. On cost cutting he said that he had already instructed ministers to reduce unnecessary foreign trips and cut down the number of seminars unless they were budgeted for or financed by foreign donors. He was also drastically cutting down diplomatic personnel in foreign missions. Except in a few cases, only a Head of Mission, his immediate assistant and one supporting officer would be posted abroad. In future all ministers must be accountable he said. Supervision at work was a must. Official transport must not be seen to be wandering about after 2.30 pm.

President Mwinyi also announced that he would be holding monthly meetings directly with the people. At his first meeting, for which some 600 people registered, and which was held at the Lumumba Party Sub-Head Office in Dar es Salaam, he sat for eight hours listening to complaints centred on unresolved land issues, delays in court cases and the denial of terminal benefits. He immediately ordered the arrest of two Land Officers who were subsequently charged in court with three counts of soliciting and receiving a 280,000/bribe. Other anti-corruption activity on subsequent days included the suspension of Judge Moses J Mwakibete for allegedly receiving a bribe (two of the judges charged with examining the case would come from outside the country), the transfer of the Commissioner and Deputy Commissioner of Customs to other duties and various other minor court cases.

In Zanzibar, after President Wakil had met 14 more people out of 300 with complaints, he summoned officials from two ministries, the CCM Party and the Police to comment on the grievances.