Authoritarianism wins big in Tanzania amid bloodshed and vote rigging

Tanzania’s experience points to how a fully empowered autocrat can demolish a country’s constitutional system.

When veteran opposition leader Tundu Lissu returned to Tanzania in August, after three years in exile and with a daring plan to challenge incumbent John Magufuli in the October presidential elections, he was cautiously optimistic.

There were few reasons to be hopeful. In 2017, gunmen fired16 bullets into his body in broad daylight in a harrowing attempt on his life. Lissu, a human rights lawyer, former parliamentarian and vice chair of Chadema, the leading opposition party, was airlifted to Kenya and then to Belgium for a lengthy recovery, all while the Tanzanian government refused to investigate his would-be killers. During Lissu’s absence, Magufuli of the ruling Chama Cha Mapinduzi party cracked down on critics, shuttering newspapers and nonprofits.

But upon his arrival at the international airport in Dar es Salaam this summer, Lissu was greeted by cheering crowds waving green palms fronds. Those supporters followed him everywhere he went on the campaign trail, as he bluntly criticized Magufuli and promised to lead an administration guided by its respect for freedom of expression.

With a long history of advocating for the rights of people impacted by mining in Tanzania, Lissu also vowed to ensure that the country’s mineral wealth was used to benefit both current and future generations, describing joint ventures between local and foreign companies.

As the crowds around him swelled, he thought he might have a fighting chance.

He was wrong. Just a few months after his arrival in his homeland, Lissu was back in exile in Belgium, having fled for his life. Magufuli had won in a dubious landslide, with the vote marred by allegations of widespread rigging and violence. For Americans who recently wondered whether their electoral democracy could survive the machinations of a would-be strongman and his political allies, Tanzania’s experience points to how a fully empowered autocrat can demolish a country’s constitutional system.

A relatively unknown bureaucrat in the ministry of public works when he came to power in 2015, Magufuli portrayed himself as a man of the people. Nicknamed the “Bulldozer,” his anti-corruption stance quickly won him accolades at home and in the region, and inspired the hashtag #WhatWouldMagufuliDo. But the President brooked no dissent in this East African nation of 58 million, as he sought to build a number of costly mega-infrastructure projects, with a nationalist mindset.

“Everybody is at risk—risk of serious harm to their lives, to their property,” said Fatma Karume, a prominent Tanzanian lawyer, recently sacked from her job for criticizing the government and subsequently disbarred. She’s contesting the decision in court.

Members of the opposition, Karume added, are “an endangered species. They have been in danger since 2015.”

A few days before the October 28 elections,text messages with the names of opposition candidates were blocked.
Click to expand...

The brutal attack on Lissu, which many believe was ordered by Magufuli’s government, is the most prominent example of violence against the opposition, but it is not the only one. In June, Chadema chairman Freeman Mbowe was viciously beaten by unidentified people, who fractured his right leg in an ambush colleagues say was politically motivated.

Other opposition leaders have suffered similar attacks. Just weeks after Mbowe was beaten, Zitto Kabwe, head of the opposition Alliance for Change and Transparency or ACT-Wazalendo, was also arrested at the internal meeting, and charged with illegal assembly.

In the lead-up to voting day, both Lissu and Seif Sharif Hamad, the opposition presidential candidate for Tanzania’s semi-autonomous Zanzibar Archipelago, were accused of violating election rules and were banned from campaigning for seven days.

The worst was yet to come.

Then, amidst reports that security forces had shot and killed at least nine people protesting planned ballot stuffing in Zanzibar, the internet was shut down on the island and on the mainland. With communications obscured, and many foreign journalists barred from covering the vote, violence continued on the election day and the days that followed.

“I was very scared,” said one woman who asked to remain anonymous, citing safety concerns. “I couldn’t even go and vote myself, because I was scared for my life.” She described harrowing injuries inflicted on civilians and opposition candidates by security forces on election day, including a woman beaten until she vomited blood.

This incident could not be independently verified, but photos seen by the Indyshow people with bullet wounds, and with gruesome bruises, burns and cuts. Ismail Jussa, a representative of ACT-Wazalendo in Zanzibar, was so badly brutalized that his shoulder and leg fractured in multiple places. He was evacuated to Nairobi for medical attention.

“Jussa was beaten in police custody. They had already arrested him. There was no reason to beat him,” said Kabwe, the ACT-Wazalendo leader, grimly adding that the situation in Tanzania was “hell.”

With these attacks came allegations of rigging. Chadema reported that a number of its polling agents, previously mobilized to monitor the vote, were blocked at gunpoint, and accused the ruling party of stuffing ballot boxes with papers pre-ticked for Magufuli. Evarist Chahali, a former agent with the Tanzanian Security and Intelligence Services—or TISS—said that the organization has helped rig elections since multiparty politics were introduced to Tanzania in 1992. “It is not a secret,” he told the Indy. 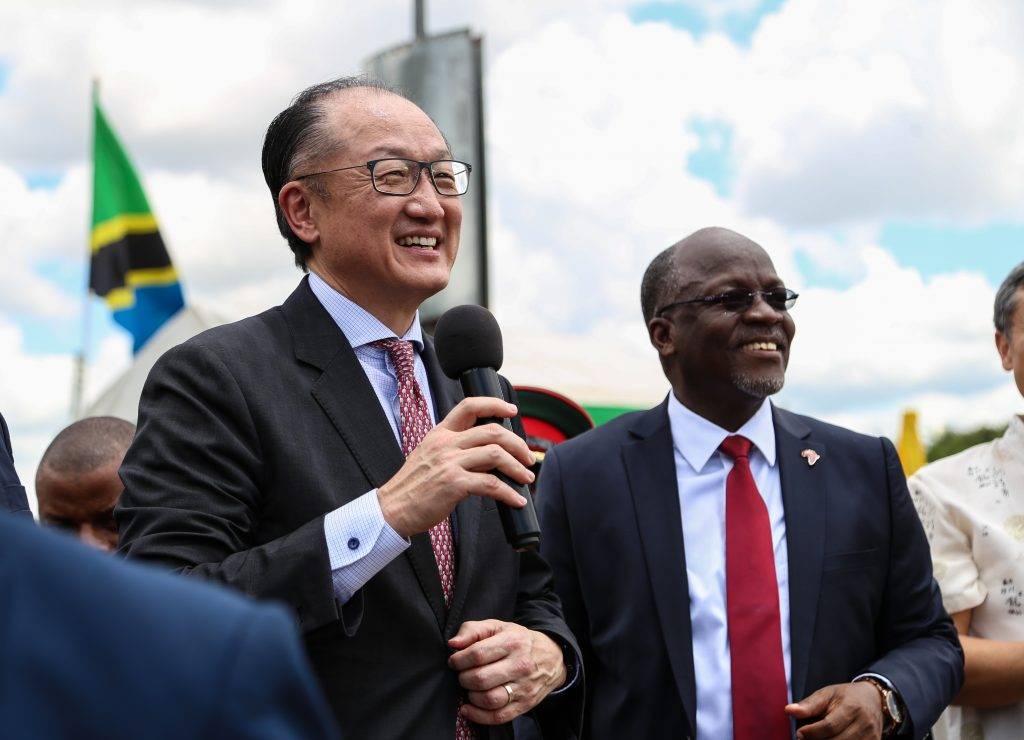 World Bank Group President Jim Yong Kim meeting with President John Magufuli of Tanzania in 2017. Photo: Sarah Farhat/World Bank.
After Magufuli was declared the winner with more than 80% of the vote, the opposition called for massive protests demanding the election be annulled. But with fear of violence still high, these demonstrations never materialized. Magafuli’s victory was swiftly recognized by China, which has long-standing diplomatic and economic ties with the Tanzanian government and is locked in a great-power rivalry with the U.S. for influence across Sub-Saharan Africa.

Regional leaders were also quick to congratulate Magufuli, including President Yoweri Museveniwho has ruled Uganda for more than three decades, and who even traveled to Tanzania to attend his counterpart’s swearing-in ceremony.

Meanwhile, Lissu was running for his life.

He’d received two telephone calls telling him the President planned to finish him off once and for all, and the security detail assigned to him during the campaign had disappeared. He hid first in the house of friends, and was briefly detained by the police before finding refuge at the home of a European ambassador and deciding to return to Belgium.

“I intend to carry on the struggle from outside the country, to denounce this regime, expose its crimes [and] demand the international community take action to punish these criminals,” Lissu said. “I have no intention of staying quiet in Europe.”

Some of this work has already begun, with Tanzanian activists submitting formal letters to the International Criminal Court in the Hague, asking it to probe violence and electoral misconduct in Tanzania.

Back home, however, the President has secured not only a personal victory, but a super majority in Parliament, ensuring a pliant legislature. The political opposition has been dealt a series of near-fatal blows. It has been effectively shut out of government, and claims that more than 100 of its members and supporters were temporarily detained during the chaotic election period. Lawyers for the opposition also told Amnesty International that the death toll had risen to at least 22 by November 11.

The exact numbers of deaths, attacks and arrests are difficult to determine, but both Amnesty International and Human Rights Watch have called for independent investigations into Tanzania’s elections.

In the wake of a bloody vote, the threat of future violence and increasingly anti-democratic policies loom over Magufuli’s next term in office.

“The violence perpetuated against those in Tanzania who are not card-carrying members of the ruling party is unsurprising. The warning signs have long been there,” said Jeffrey Smith, founding director of Vanguard Africa a Washington, based pro-democracy advocacy group, whose board is composed of a bipartisan team of high-powered public relations professionals and political consultants.

“Magufuli and the Chama Cha Mapinduzi [Party] are running roughshod and bulldozing any semblance of democracy,” Smith added.

Missile of the Nation

Disctatorship is a form of Authoritarian gorvement and it's where we are heading.
-Just saying-
You must log in or register to reply here.