Comatose Ariel Sharon 'could be home in days' 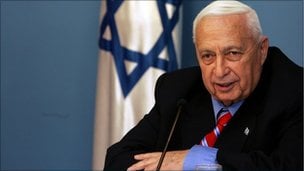 Mr Sharon was born in Palestine in 1928, when it was under British administration


The family of former Israeli Prime Minister Ariel Sharon is preparing to bring him home from hospital "within days", Israeli sources say.

The 82-year-old has been in a coma since 2006, when he suffered a massive stroke.
Sources told the BBC he could be moved to his farm in the Negev "as early as Friday" from his hospital in Tel Aviv.

Nicknamed "the bulldozer", the former general was seen as a strong leader by Israelis, but reviled by Palestinians.

Last month, medics at Sheba Medical Centre in Tel Aviv said the former leader remained in a vegetative state but that his condition was stable.

"He does have periods of sleep and in the daytime he opens his eyes. Sometimes the family believes there is recognition," his long-time personal physician and friend Dr Shlomo Segev told the BBC.

The hospital has confirmed that it is making arrangements to move Mr Sharon to his beloved farm - Sycamore Ranch - in southern Israel, where his late wife is buried.

"Initially, Mr Sharon will go for several holidays," it said in a statement earlier this week.

Short visits would be supervised by hospital staff, to make sure that private carers hired by the family were able to keep him in a stable condition, the statement said.

"These attempts... will pave the way for his full return home to his family and the environment he loved so much," it added.

He was a keen promoter of the expansion of the state and initiated the construction of the security barrier around the West Bank.

But despite fierce opposition in Israel, he ordered Jewish settlers to leave Gaza and four settlements in the West Bank.

God is Able God bless Israel and its People

Israel, put your hope in the LORD,
for with the LORD is unfailing love
and with him is full redemption.

He himself will redeem Israel
from all their sins.
D

ISRAEL is Blessed period
You can whine and cry the way you want, but the truth will Remain the same. Israel is Blesses by God, Devil is not going to change that.

Get it in your head.... Israel is Blessed and they have the right to be in the land they were given by GOD...:smile-big::smile-big:
R

Hang the fat cat!! These kinds of people don't deserve life at all....

njiwa said:
Hang the fat cat!! These kinds of people don't deserve life at all....
Click to expand...

Man of hate!
You hate anything from Jews! What is the difference you have with Hitler?
You must log in or register to reply here.