The deputy leader of al-Qaeda, Ayman al-Zawahiri, has said the decision of UK forces to "flee" Basra shows that Iraqi insurgents are gaining strength.

In a videotaped interview released on an Islamist website, Zawahiri said the US-led coalition was "defeated and looking for a way out" of the country. 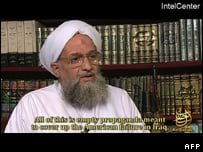 The move to Provincial Iraqi Control four-and-a-half years after the invasion is being seen as a key stage towards a final British withdrawal from the country.

Speaking in a 90-minute interview with al-Qaeda's media arm, as-Sahab, Zawahiri said the world was witnessing a "triple failure for the Americans in Iraq".

"No matter how much the gigantic propaganda machine in America tries to deceive the people, the reality is stronger and worse than all the deceptions," he said in the video posted on the web on Sunday.

"Reports from Iraq point to the increasing power of the mujahideen and the deteriorating condition of the Americans. The decision of the British to flee is sufficient [proof of this]," he added.

Zawahiri also denounced as "traitors" Sunni Arab tribes who have been fighting alongside US and Iraqi forces against al-Qaeda-linked militants in Iraq.

He said the US had been pouring "oceans of bribes" at the tribes and might have infiltrated the Islamic State of Iraq, an umbrella group that includes al-Qaeda, with agents who were committing crimes that were alienating ordinary Iraqis.

"If it becomes clear that some group is involved in these crimes, they should be exposed to defeat the plots of the Americans," he said, sitting beside shelves full of Islamic theological and legal books.

Al-Qaeda's second-in-command ended the interview by calling on local Islamist militants to unite with the Islamic State of Iraq, because the country was "the most important of the fields" of conflict.