.......... Director of Zanzibar Port Authority, Mustafa Aboud Jumbe distanced himself from blame(for not supervising as appropriate port and marine activities in Zanzibar), saying the authority was not responsible in overseeing marine transport services (passengers and cargo).

Speaking to our sister newspaper, Nipashe yesterday, Jumbe said This is the duty of the Surface and Marine Transport Regulatory Authority (SUMATRA), which was established by the law to oversee marine and surface transport sectors.
Sumatra stopped operations in Zanzibar after Members of the House of Representatives claimed that the authority was operating illegally, as marine transport services was not on the list of Union matters.
Efforts to get director of Zanzibar marine transport, Vuai Haji, did not bear fruit, as his mobile phone was not answered.
In July, this year, Minister of Communications and Transport, Hamad Masoud presented a special report in the House of Representatives, defending marine transport facilities in Zanzibar, saying they did not pose any threat to the lives of travellers.
The minister was responding to the growing public concerns, after seven ships plying Zanzibar developed technical faults.
SOURCE: THE GUARDIAN 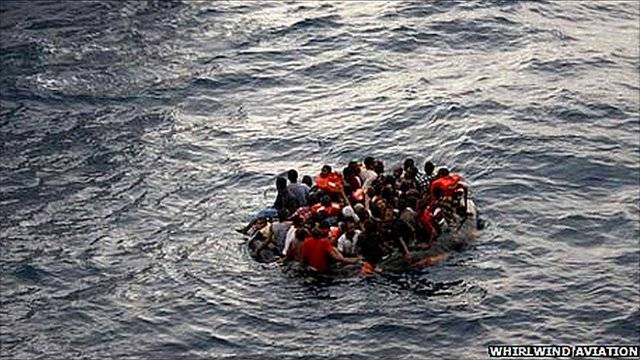 
http://faq.external.bbc.co.uk/questions/bbc_online/adverts_general​
Captain Neels van Eijk from Whirlwind Aviation flew out over the ocean to help search for survivors and describes what he saw to the BBC

Continue reading the main story[h=2]Related Stories[/h]
At least 187 people have died after an overloaded ferry sank off the Tanzanian island of Zanzibar with at least 800 people on board.
A government spokesman said 620 survivors had been rescued. Three days of mourning have been declared.
The MV Spice Islander was travelling between Zanzibar's main island, Unguja, and Pemba, the archipelago's other main island - popular tourist destinations.
It is thought to have capsized after losing engine power.
Rescue efforts were hampered by the fact that the overloaded boat had capsized at night.
The ship had been bringing people back from holiday after Ramadan, and had reportedly stopped earlier in Tanzania's commercial capital, Dar es Salaam.
The authorities are struggling to cope and have asked for foreign help.
The Zanzibar government has set up a rescue centre and called upon all reserves to join the rescue effort. It has also called for support from other countries, such as South Africa and Kenya.
Washed ashoreThe survivors were ferried by privately owned fast ferries and brought back to the main harbour in the historic Stone Town, Zanzibar police commissioner Mussar Hamis said.
"We are still receiving many bodies by truck loads," Dr Karim Zah of the Mnazi Mmoja Hospital in Zanzibar told Reuters news agency. 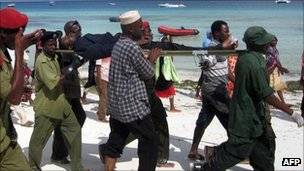 Those rescued were brought back to the main harbour in Stone Town
"The death toll will likely be much higher."
Dozens of soldiers carrying bodies to shore dotted the white sand beaches at the northern tip of Zanzibar island where thousands of people anxiously awaited news of survivors, the agency adds.
Catherine Purvis, a British tourist in Zanzibar who was waiting for a ferry to take her to Dar es Salaam, says she saw lots of bodies being brought out of the water.
"I'm standing at the port in Zanzibar with about 10 other British and American tourists," she said.
"Our ferry has been delayed as they're using all ferries to rescue the people from the ship.
"People are being carried across in front of us on a drip. There are lots of body bags."
Holding onLocal helicopter pilot Captain Neels van Eijk flew over the disaster area.
"We found the survivors holding on to mattresses and fridges and anything that could float," he told the BBC.

"By then, there were a few boats that had made their way out. They were looking for survivors, but although the sea wasn't so rough, the waves were high so it was difficult for them to spot them.
"We flew to the boats and guided them to the survivors so that they could pick them up. There were also quite a few bodies in the water."
The ferry left Unguja at around 21:00 (19:00 GMT) and is said to have sunk at around 01:00 (23:00 GMT).
One survivor, Abdullah Saied, said the ferry had been heavily overloaded when it left Dar es Salaam, and some passengers there had refused to board, the Associated Press news agency reports.

Gari la Mizigo vs meli ya mizigo!!!!???
You must log in or register to reply here.