Togo and Arsenal star Emmanuel Adebayor has just been on a "tour of hope" across West Africa to his homeland, where he was presented with the BBC African Footballer of the Year award for 2007. The BBC's Farayi Mungazi travelled with him.

Adebayor was mobbed when he returned to his former school

Emmanuel Adebayor's self-styled "tour of hope" that took him to Ghana and Togo left me with a different view of today's professional footballer.

The Arsenal and Togo striker is not particularly showy.

For a man with little education, he projects himself with consummate ease and is unfailingly polite.

He reminded the cynic in me that not all professional footballers are arrogant millionaires with egos that match the size of their pay packets.

Due to his status as an African football icon, playing for one of the biggest clubs in the world, Adebayor is mobbed wherever he goes.

"I enjoy the attention because it shows that people love me for what I do," the 2007 BBC African Footballer of the Year said, when asked about the non-stop adulation.

But, he says: "I'm a normal person; in the morning I clean my teeth like everyone else."

Everywhere we went, Adebayor kept his childhood friends close, reminding him of the time he had nothing.

Adebayor may not yet be at his peak as a footballer, but the Togo captain is fast becoming one of the finest Africa has to offer.

The 24-year-old is now a household name; his meteoric rise aided by a string of scintillating displays for English Premier League side Arsenal. 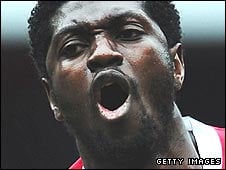 In Ghana, where Adebayor went to school, some people wait years to see Otumfuo Osei Tutu II - a revered man and king of the most powerful and richest part of the country.

But Adebayor got an appointment within months, and was able to sweet-talk the palace into a second one after a no-show the previous day.

The audience with the football-loving king brought him to the heart of the Ashanti kingdom, about which his late father once told him stories.

Like most African stars in Europe, Adebayor was born and raised up in a desperately poor family, and his is a classic rags-to-riches tale to rival any other.

He grew up in a dilapidated house in a poor suburb of the Togolese capital, Lome.

His mother sold dried fish at the border with Ghana, earning barely enough to feed the family and buy the young Emmanuel his first pair of football boots.

The family was so poor that once he was left in hospital for seven days because his parents could not afford to pay for the treatment.

"I think a lot of people know me just on the pitch," Adebayor says.

"I put in a lot of hard work to be where I am today, but I'll never forget what it was like when I was young.

"Life was very difficult, and I told myself that I only had one chance to survive and that was to be a footballer." 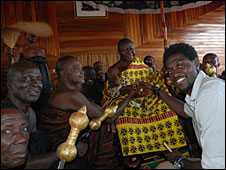 Adebayor did not enjoy school, skipping classes to play football - though now, on his "tour of hope", he encourages children to stick to their studies.

He sees it as his chance to give something back to Africa's youth.

When he left Togo for France to embark on a professional career in 1999, not many would have foreseen that a football superstar had been unleashed.

"When I was going to Europe, I remember what my mother told me at the airport; she said: 'Manu, you see where we're living, you must go to France and do something good because we need your help.'"

He has now built her a huge, double-storey mansion in Lome, which is surrounded by shacks and run-down buildings.

But his mother has refused to move in, preferring to live with the friends who once knew her as the "Haton patchwork woman" - someone so poor that she could not afford a matching dress and headgear.

Nine years after launching his professional career, Adebayor speaks passionately about the need for him to inspire youngsters with a similar background to his.

"When I was growing up I had someone to help me, to give me something, and today I'm in a position to help others, so helping people is always a pleasure for me."

African Perspective featuring Emmanuel Adebayor will be broadcast on the BBC World Service in Africa on Saturday. UK listeners can hear the programme on BBC Radio 4 at 2000 on Monday.
You must log in or register to reply here.