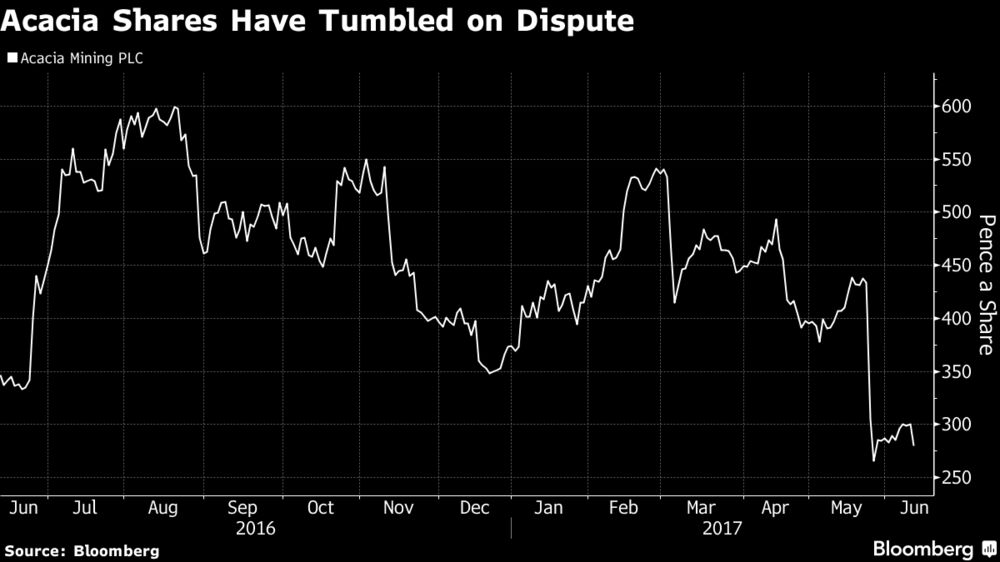 “The committee has established that Acacia Mining Plc has been conducting its mining business here in Tanzania contrary to the law,” Nehemiah Osoro, chairman of a committee ordered by President John Magufuli to conduct an audit of mineral exports over the past 19 years, said Monday in the commercial capital, Dar es Salaam.

Acacia’s shares dropped as much as 14 percent and were 5.8 percent lower at 282.60 pence by 9:34 a.m. in London. The company, which is majority owned by Barrick Gold Corp., said in an earlier statement that it has “fully cooperated” with the audit committee’s work.

Acacia also said that it will make another statement “as soon as practical” following Monday’s presentation by the government.

The accusation is the latest sign of deteriorating relations between Acacia and the country where it mines all its gold. Last month, a Tanzanian presidential committee investigating the export of gold and copper concentrates, a semi-processed form of ore, said that Acacia hasn’t fully declared all the minerals contained in its concentrate. Acacia said it fully declares everything of commercial value that it produces and pays all appropriate royalties and taxes.

Acacia slid almost 40 percent in two days after the first committee report last month. The firm has been in dispute with the government since the country issued a surprise ban on concentrate exports in March. The restriction is costing Acacia about $1 million a day in sales and the company has said it may be forced to shutter its flagship Bulyanhulu mine unless a solution is found.

Mine Concern
“If no resolution is found over the summer we would expect Bulyanhulu to be placed on care and maintenance,” Numis Securities Ltd. said in a note to investors Monday.

Before the concentrate ban was introduced, Acacia had been making progress in turning around the troubled Bulyanhulu operation, with output at the mine increasing 6 percent in 2016 to the highest in a decade. Concentrates accounted for 45 percent of Bulyanhulu’s revenue last year and about 30 percent of the company’s total sales.

Magufuli is overhauling Tanzania’s mining industry as he seeks to generate more revenue to help finance projects including the building of a new port, railway and oil pipeline. In March, he banned mineral exports and ordered an audit to identify loopholes that he said result in income losses. Last month, the president fired Mines Minister Sospeter Muhongo after a separate probe found mineral exports had been

Rushwa rushwa kiongozi
You must log in or register to reply here.