A man is arrested over Burning and Killing two Chinese Nationals in Zambia.. According to reports from the Zambia Police, a 22-year old man has been arrested over an aggravated robbery and the murder of two Chinese traders in Zambia. The police and fire service of Zambia were responding to a fire outbreak in a warehouse belonging to the Chinese citizens , when they stumbled upon a potential murder scene behind the house. Seen at the front porch was a trail of blood that leads into the house behind the warehouse, wherein a machete was retrieved as the possible murder weapon of the victims . From the official report, Zambia Police said : " Police in Lusaka received a report of Aggravated Robbery and Murder which occurred today 24th May 2020 at around 12:00 hours in Makeni.

Initially, a report of fire incident was received from a member of the public to the effect that Warehouses belonging to Chinese Nationals were on fire.

Police rushed to the scene together with the Fire Brigade and whilst there, it was discovered that owners of the warehouses were not at the scene of the fire and a further inquiry led to a search of their houses located behind the warehouses.

Police spotted bloodstains on the floor right from the entrance and a machete with blood stains was also found inside the house on the floor near the bed.

With the help of members of the public, one suspect whose name we have withheld aged 22 of Garden House area was apprehended.

A burnt body of a female Chinese national namely Hu New Cao aged 52 has been retrieved from the inferno. A search for the other two remaining Chinese Nationals has continued. A Docket has been opened and one arrest has been made. Investigations have continued.” With some 20,000 people, Zambia is home to one of the largest Chinese diaspora population in Africa . In 2017, the Zambia Police had touted a plan to recruit 8 police officers into the Zambian Police force but it was greeted with nationwide outcry that made the police to drop the idea. Last year, one Kenneth Figo , who's an employee to a Chinese couple was arrested over the beheading of his two boss. Apart from this two crimes , relations between Chinese nationals and Zambians have been relatively cordial. 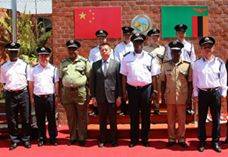